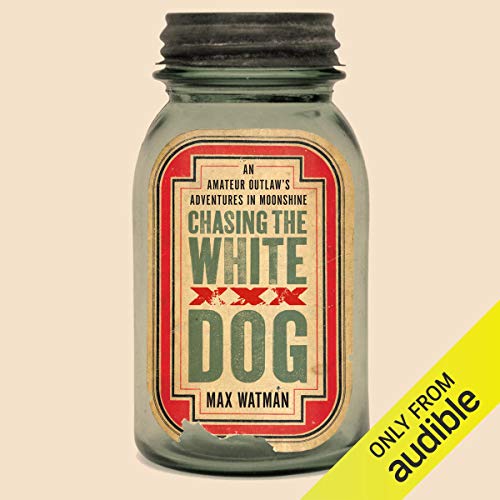 In Chasing the White Dog, journalist Max Watman traces the historical roots and contemporary story of hooch. He takes us to the backwoods of Appalachia and the gritty nip joints of Philadelphia, from a federal courthouse to Pocono Speedway, profiling the colorful characters who make up white whiskey's lore. Along the way, Watman chronicles his hilarious attempts to distill his own moonshine - the essential ingredients and the many ways it can all go wrong - from his initial ill-fated batch to his first successful jar of 'shine.

It begins in Monongahela, Pennsylvania, where drunk and armed outlaws gathered in the summer of 1794. George Washington mustered 13,000 troops to quell the rebellion, but by the time they arrived, the rebels had vanished; America's first moonshiners had packed up their stills and moved on.

From these moonshiners who protested the Whiskey Tax of 1791, to the bathtub gin runners of the 1920s, to today's booming bootleg businessmen, white lightning has played a surprisingly large role in American history. It touched the election of Thomas Jefferson, the invention of the IRS, and the origins of NASCAR. It is a story of tommy guns, hot rods, and shot houses, and the story is far from over.

Infiltrating every aspect of small-scale distilling in America, from the backyard hobbyists to the growing popularity of microdistilleries, Chasing the White Dog provides a fascinating, centuries-long history of illicit booze from an unrepentant lover of moonshine.

What listeners say about Chasing the White Dog

Dude should really not read his own book on Zoom. Souded though he was in the Dunny. Book was ok, but who writes a book about MOONSHINE and then is scared avout distilling a few bottles.

Max Watman's tale of the world of moonshine then and now is dripping with enthusiasm and energy. His effortless transitions between, and beautiful portrayals of personal experience, historical narrative, and technical analysis kept me with my headphones tucked in my ears with no regard for personal safety or socially acceptable standards of behavior. It is a testament to his artistry that the work keeps the listener rapt despite significant recording issues. While most productions have a noise gate that will keep the listener from having to listen to distracting in-breathing and page flipping, this sounds as if it was recorded without the benefit of an engineer, especially during the few times in which a mistake and rereading wasn't cut out. Despite these issues, well worth a purchase. I will be reading more Max Watman!

Meandering, yet Descriptive and insightful

What made the experience of listening to Chasing the White Dog the most enjoyable?

I liked the writing style. Max Watman did an excellent job of telling the stories in the book.

When he brewed his own moonshine

The upside is the great story telling, the downside for me was when the book wandered from adventures to a history lesson. I wanted more adventure, more close calls with the police, more of what's it really like to work on a still site or something of that nature. While the history of moonshine goes back to the 1700's, that stuff is ancient history to me, and I thought too much of the book focused on that history and the history of NASCAR. I wished Max was out in the woods making illegal brew or something exciting, but it seems like he kept himself at a distance somewhat. I know that it might not be possible to get that involved in an illegal operation, but that's the juice of this sort of book. Sorry for the rant, but I felt like it had to be said.