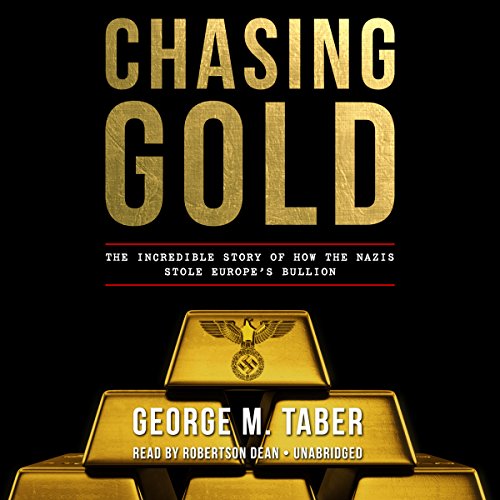 In the highly anticipated new book from the best-selling author of Judgment of Paris,George M. Taber reveals the integral role gold played in World War II, from its influence on the Nazi war machine to the ultimate triumph by the Allies and the fall of Berlin.

For the entire history of human civilization, gold has enraptured people around the globe. The Nazis were no less enthralled by it and felt gold was the solution to funding Hitler's war machine. Gold was also on the mind of FDR across the Atlantic, as he worked with Europe's other leaders to bring the United States and the rest of the world out of a severe depression. FDR was hardly the first head of state to turn to gold in difficult times. Throughout history, it has been the refuge of both nations and people in trouble, working at times when nothing else does. Desperate people can buy a loaf of bread or bribe a border guard. Gold can get desperate nations oil to keep tanks running or munitions to fight a war. If the price is right, there is always someone somewhere willing to buy or sell gold. And it was to become the Nazi's most important medium of exchange during the war.

Chasing Gold is the story of how the Nazis attempted to grab Europe's gold to finance history's bloodiest war. It is filled with high drama and close escapes, laying bare the palate of human emotions. Walking through the tale are giants of world history, as well as ordinary people called upon to undertake heroic action in an extraordinary time.

What listeners say about Chasing Gold

Reads like a clive cussler novel, unbelievable suspense and events that are not in the history books. More like a James Bond movie, but the real history of what was really a gold war.

Wonderful performance of a very interesting story. Would recommend highly. Will look for other books by this author.

I have read a number of WW2 Books, but this one was the first that covered the gold and monetary movement. It could be a great movie one day.

The beginning was the best part.

The first 10-15 minutes was exactly what I was hoping to get with this book as it shot out of the gate as a thoroughbred. It was as if the author then realized its a marathon and not a sprint after which the book remained flat until the end which it continued where the start ended.
History seems to indicate the Nazis had most of the goal, but the books made it seem like they really didn't capture much at all.
There were some interesting behind the scenes info which did add to the book, but I was hoping/expecting more of what the first few minutes of the book had to offer.

A really interesting angle on WWII, and how gold impacted military strategy and alliances. I would have given this book a 5, but occasionally the author rambles about statistics (quantities of gold) a bit much.

A great add-on read for those covering WWII

This is a great additional read for anyone doing comprehensive reading about WWII and the Nazi's. It was eye-opening about the process that was in place to systematically raid the treasuries of each country they conquered. That made for a good story as countries expecting to be conquered took great measures to stash their gold. Then of course was the story about what happened post-war as countries tried to salvage their economies and their treasure. Good book!

Riveting history of gold's influence on events in WW2

Absolutely superb. Carefully researched and presented in a country by country format running through the years from the 1920s to post-war, and covering key events in political and military history tied into the main story of how the nazis financed their appalling activities by plundering other nation's treasuries. As dramatic and exciting as a thriller with the added fascination that the events actually occurred. A rewarding and fascinating book,