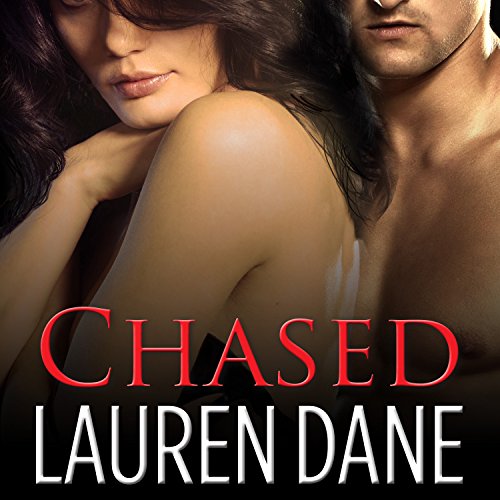 Liv Davis has just about given up on her happily ever after. Burned by love more than once, she's beginning to think Mr. Right isn't in the cards for her.

Marc Chase is a confirmed bachelor and lover of women - lots of them. He's determined not to fall head over heels the way his brothers have. Until he kisses Olivia Davis and realizes head over heels may not be such a bad thing after all.

Can Liv open her scarred heart for this younger ladies' man? She loves Marc more than she can begin to admit but she's terrified of being rejected again. Marc faces a challenge greater than he's ever faced before. Making a woman believe he's more than just a great bedmate - making her believe he's in it for good. In the end it will all come down to two days in a hotel and a bet. Can they both win?

What listeners say about Chased

This one book fell flat...

I feel like this book was rushed and there was no actually story line to this book. Normally, I adore Lauren Dane's books but this one just bored me. I'm hesitant to continue with this series now.

I WAS SO LOOKING FORWARD TO THIS BUT.....

Firstly, let me say that I've loved all the previous books in this series but somehow this book just didn't 'grab me' like the others did. Now, I don't know whether it's because I've listened to some great books this month, or perhaps I just wasn't really in the right frame of mind to appreciate it and should have chosen one of my other loves - a paranormal, or historical romance instead. However, I didn't so here goes...

Marc, another all too handsome Chase brother and player, has thoughts of 'going steady' one day when he takes a long 'hard' look at Liv (his brother's ex) and goes about convincing her that he's a changed man (well good luck with that) then when he kisses her he realises he wants it all. Liv want's to settle down but doesn't believe him, although she dates him, has lots of hot sex with him, there's plenty of sexual chemistry and joint attraction and he tells her, and shows her, over and over and over again that he's serious (poor guy's throat and pecker were worn out).

The problem (for me) - it was sooo repetitive - just everyone was always and forever saying to Liv that he loves her and she loves him and that it's in the way they look at each other, and Marc, who was so nice, patient and thoughtful, does absolutely everything possible to show her that he's 100% serious but she's not really convinced. So on and on and on and on (well you get the picture) went the 'how long will this doomed relationship last' attitude, together with other reasons why Liv thinks it'll never work, that I didn't have that all important 'feel good' factor or the anticipation whilst listening and felt it was more of a battle than a romance. I understand why Liv feels this way but, apart from a few touching tender moments, this listen was... dare I say it, a bit boring and when it thankfully ended I thought "thank God it's finally over".

To end on a positive note - it was good to catch up with the lives of the other Chase brothers, their partners and the ever growing family.

Worth a credit? If it was a stand-alone listen then I would have to say No but, because I am committed to the Chase brothers, then it's got to be a Yes.

Olivas character has some really deep hurt that she must face, and does so beautifully in this book. I absolutely love how Marc came to the plate and truly fought for what he wants, his struggle is opening Liv up to see him. I absolutely love this series.

Absolutely, loved it. Could not put it down. Needed to finish the Whole complete series. 💖 THANKS .

Great read.. Loved the characters they seemed so realistic. Can't wait for more. Lauren is a excellent writer.