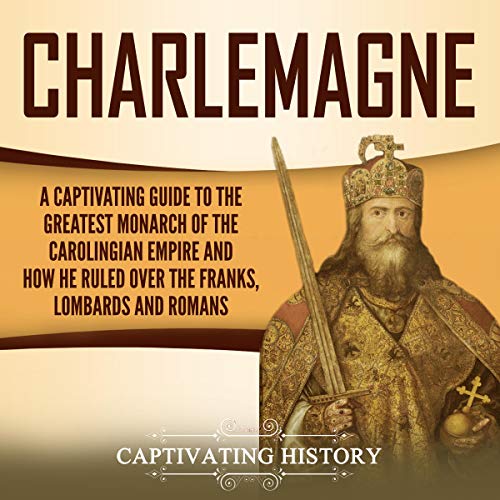 If you want to discover the captivating history of Charlemagne, then pay attention...

Warrior. Ruler. Patron of the arts and language. Terrorist. Brutal oppressor. Protector of the good. Guardian of Christendom. Father of Europe. There are so many different ways in which Charlemagne can be described, and yet, the man himself is often seen as an enigma.

Depending on the viewpoint of history, he could have been either a monster or a guardian angel. Yet, as with most men, the truth lies somewhere in between. The truth is that he was human.

Charlemagne, crowned emperor of Rome and king of the Franks and Lombards, was the third ruler of the Carolingian Dynasty. He is also known as Charles the Great, and greatness certainly is a fitting word to describe his illustrious rule of 47 years.

He added huge tracts of land to the Frankish kingdom, reformed everything from administration to currency to language, and changed the dynamics between the church and state forever - a defining influence on the entirety of Europe during the Middle Ages.

In Charlemagne: A Captivating Guide to the Greatest Monarch of the Carolingian Empire and How He Ruled over the Franks, Lombards, and Romans, you will discover chapters, such as:

So, if you want to learn more about Charlemagne, scroll up and click the "buy now" button!

What listeners say about Charlemagne

It's a book for the serious amateur historian or anyone with mild inquisitiveness. I especially enjoyed the narrative and analysis of what happened to Charlemagne's heritage and legend after his death. He grew into a mythic figure, and then an iconic logo for a rather diverse series of political and religious descendants. Well worth the time for even random stuff.

Ccomplete history of the man, the times,

It is a very well-written entertaining history of Charlemagne. The author has an informal modern style that makes the enjoyable listening of what can be rather tough going in other books. He provides a lot of information and authentic sources, so the writing technique is not at the cost of information.

The work is good and I learned a wonderful deal about Charlemagne and his times, but the audible is a scholarly documentary, not light content to follow!

Presumably the classic biography of Charlemagne. Likely a bit heavy for a casual listener, but it did change some of my preconceived ideas of the man founded on the earlier listening.

It was quite interesting but I saw the style of writing quite serious going and challenging to get into.

This audiobook is a very thorough and straightforward narrative of Charlemagne’s life. Highly recommended for all.

Very fascinating, discussed a period, possibilities, and marble man like Charlemagne. The literary author is an exemplar.

The arch of the life of Charlemagne

The content is wealthy with a historical perspective on the person and age of Charles. His involvement with the world of his age is engrossing.

The content is wealthy with a historical perspective on the person and age of Charles. His involvement with the world of his age is engrossing.

Excellent overview in a quite unbiased fashion.

Charlemagne is one of the most engaging and most influential figures of the Middle Ages. I was expecting some insight into his character, a convincing story. It is comprehensive in detail, but I don't have any more of a mental or emotional picture of the man than I did before I listen to it.

A well-known personality of the history.

King Charles was able to unite Europe unlike anything is ever done before, mainly due to his character, his force of will, and his power to earn the respect of all involved, from the church rulers to territorial leaders of the day. It was a considerable achievement that has not corresponded again for hundreds of years, and even today finds relevance in the struggles that Europe is having as it pursues at least some economic unity.

Well Stated by the Author.

An in-depth history of not only the man and his life but the long term impact of his direction as a guiding direction for Europe.

This Audible is Good.

This audiobook is comprehensive and contained a detailed definition of Charlemagne’s life. It is highly recommended.

A bit of a rough according to my opinion... more like a history text. But this is the definitive audiobook for the life of Charles!

The life of Charlemagne

Having never heard the history of this fabulous man, its such a captivating tale. Every bit as effective as the biography of Charlemagne, when is the lyrical, rap album, or Netflix series scheduled?

More than you ever wanted to know about Charlemagn

A detailed biography of the most significant ruler of the Early Middle Ages. The narration by Jason Zenobia is simply outstanding.

One of the best a historical timeline

If you are looking for a historical timeline along with detailed event characterizations befitting a theoretical dissertation, then this is not your audiobook. It is, rather, an exposition of well-researched historical perspectives sense-making of a fictitious historic figure. I thoroughly enjoyed it.

Excellent content to listen. The Dark Ages aren’t so dark behind this stuff. It fills in a lot of backdrop for modern European history.

Best Review I have ever wrote.

I have often heard the term but no more than that until currently. I chose this audiobook for a summary of Charlemagne's life. It wrapped it well if not too concisely for my taste. I found I had listened to it in one sitting.

Very enjoyable, So delighted I listened to Captivating History's audiobook. A description is well told. I highly recommend this to history buffs.