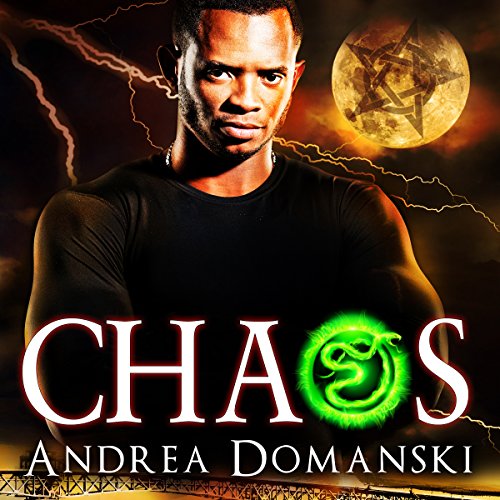 An age-old prophecy of global devastation is about to be fulfilled.

Hunted since childhood over his preternatural powers, Orano Tulay hides behind a surly attitude and antisocial demeanor. He joined the Omega Group to protect mankind, but the latest threat involves claims of witchcraft that sound outlandish even to a man like him.

Forces of magic are being used to manipulate forces of nature, exploiting humankind's greatest weakness and unleashing chaos. Face-to-face with a three-hundred-year-old coven of witches led by a power-hungry high priestess, Orano must expose himself to risk like never before. As if that isn't bad enough, he discovers one of the coven members is his first love - the girl he left behind more than a decade ago.

Orano must prevent the high priestess from succeeding in her quest for world domination, but first he'll need to keep his own demons at bay.

What listeners say about Chaos

This is the first book in the Omega Group series I've listened too, and there's a lot of Chaos going on..... The good kind, that reels you in, and hooks you on a fast paced story of good versus evil. While the drama for world domination takes place, it's was character's I really enjoyed.

Orano and Phoenix are completely opposite. Orano is serious, stoic, and doesn't have many facial expressions, while Phoenix is open, friendly, and thinks quick on his feet. Even though these two are different, they worked well together.

Orano and Phoenix go to investigate the claims about a witch, and plans of world domination, and come face to face with Orano's childhood sweetheart. Orano and Grace have not seen each other in years. They each have their own secretes, but will have to open up, and trust each other, if they want to prevent the high priestess's plans for world domination.

Daid Dietz is definitely an enthusiastic narrator, and animates the story very well. He does male voices well, but the females...some are awkward and a little too high pitched.

Overall not a bad story, or narration, but I do recommend starting with book one. For those with a Kindle Unlimited membership, these books are currently offered and would be a perfect whispersync deal!

I received this audiobook in exchange for an honest review.

This was another good book in the Omega Group series. This book involved witchcraft and a plot for world domination. It is interesting to watch the relationships between characters grow and develop, as well as meeting new characters. I found the lead character of this novel, Orano Tulay, fascinating. I loved the descriptions of his upbringing and childhood. I listened to the Audible audio version of this book narrated by David Dietz. I liked the narrator's character differentiation and his Scottish accent for the character, Myrick. I don't love his voices for some of his female characters 100%, but they are better in this book than in some others. Overall, this is an interesting book that would be great for fans of supernatural urban fantasy.

I have enjoyed this Series so much, I accidentally read the last 2 books our of order but that did not actually matter. I can not stress how Wounderfull this series is and I Highly recommend picking up the first book and start enjoying them yourself.

I have enjoyed the Omega series and, I am excited to read the last book! The author has shown creativity in each of her book's thus far! I enjoy listening to them from Audible too!