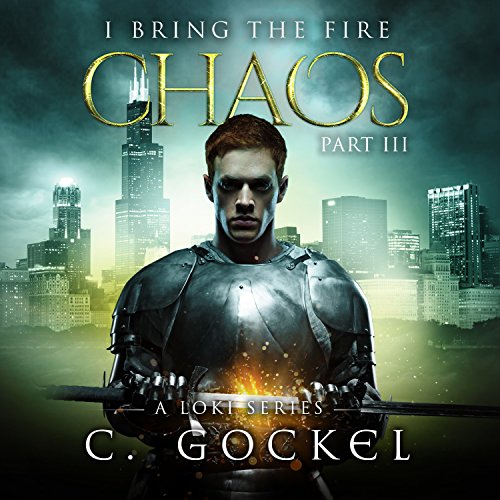 In this final installment of the Cera story arc, the noose around Loki's neck is tightening. Gerðr, the frost giantess, wants him dead; Cera, the World Seed, wants his head - literally and figuratively; the FBI wants him in Guantanamo; and an old friend from Asgard wants to bring him home, whether Loki likes it or not.

Things can't get any worse, but when Loki's involved, it's certain that they will.

In the third chapter of the I Bring the Fire series, humanity's demons are unleashed on the Nine Realms, and Amy Lewis and Steve Rogers get front-row seats. Chaos might be their only hope.

What listeners say about Chaos

really enjoying this series. the annpuncer is clear and it is very engaging to listen to

Continuation of a good series

At last Loki and Amy get together, but it doesn't stay that way. The ending leaves a question that makes you want the next book in the series.

the continuing adventures of loki is still great. The shared lives, reincarnations interesting. The action and emotional connections between characters work well. Still a good time had.

the narrator takes a while to get açcustomed to. this is the 3rd book in a 6 book series.

I enjoyed reading this book so much I couldn't put it down. So while I was driving, I had the Audible program read it to me. The narrator did an excellent job in differentiating between the characters.

BK'S performance does PG's storytelling justice. A great way to step into a world of adventure while accomplishing mundane chores like housework :-)