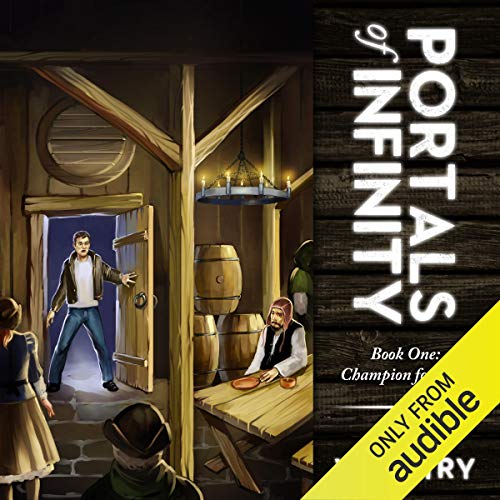 William is just your typical engineer fresh out of college with a stressful job, a boring life, and not a lot of prospects of anything better in the future.

Until one weekend while hiking in the woods he stumbles across a portal to another time, or perhaps another place. The more he investigates this new world, the more he realizes that it may just be able to offer him a lot more than the one he's been living in.

However, there are forces at work beyond anything that Will has ever come across before and the local Goddess seems to have taken a liking to him. Will may soon find himself getting an offer and cannot afford to refuse.

This book is awesome great work great characters and story and storytelling. A modern day man trips into a portal and find himself in a world gods and goddesses. a most to read or listen to.


I enjoyed listening to this audiobook, A great companion while driving to work
I will definitely be following this author. Narrator is good too.

I was given a copy of this book by the author, in return for an unbiased review. OK, that being said, I really enjoyed the book. It has got a nice pulp sensibility to it, Like something an early Roger Zelazny or Jack Chalker would have written. unabashedly unpolitically correct, it is as subtle as a dagger to the ribs, in a good way. in a genre that has gotten so PC, the author has decided to write a fantasy that Doc Smith or RE Howard would have been proud to call their own. The story involves, Will, a young engineer on vacation with his friends when he stumbles through a portal to another world. The natives are human, and society seems to resemble the middle ages. He quickly assimilates, and determines on a course he can make money on, by transporting bows of each world to the other, where the handcrafted bows of the fantasy world sell for big money here, while fiberglass bows sell for high prices in the fantasy world. He meets a woman in the Inn he stays in, and starts a relationship with her. He starts taking sword lessons from a local swordsman, and keeps traveling between the worlds, until one day he comes back to earth and can't get back. He ends up at a Ren Faire as a performer, learning different skills, until he is called upon to fulfill his true Purpose. A god calls upon him to be a Champion, and he takes up the Mantle in yet another world, where he meets a queen, fights a war, beds some women, including the Queen, and finds out his true purpose, which is much grander than he knew. I wont say what that is, but it seems to be one I'll be reading the rest of the series to find out. Lots of battle action, solo fights and adventures in this book. The characters are fun, with actual masculine make characters and some actually feminine female ones, as well as some badass women warriors too. There is also magic, Gods that manifest, and a nicely developed set of world, with lots of room to expand the story. I recommend this book to any fans of old Zelazny and Chalker stories, as well as some of the older Heinlein stories, such as Glory Road.

Ok. First off ignore they usual suspects carping about misogyny. That criticism of this series is way overblown. This series has problems and that is not among them. I got halfway into book 3 before I couldn't take it anymore, and had to bail.

First of all. What is good? The author must have been an amazing D&D DM. This series feels like he took the best D&D campaign world he created and turned it into a book. The Portals gimmick lets let the author create wildly different worlds for the MC to travel through.

The book starts off with so much promise! The first half grabs you. You think you are in for something really different. The MC travels to this new world and doesn't immediately go off to slay monsters and do other typical litRPG stuff, instead, he does what a person who could travel between worlds and had half a brain would do: He starts up a trading business!!

Brilliant! The adventure he has just getting his goods from the "portal", to market in a bigger town and then his goods going the other way back to earth were really interesting. You would not think that a book about a trader would be any good, but this is! It has almost a slice of life feel. Getting oriented in the small village he arrives in, figuring out how to get coin, surviving long enough on his way to the bigger city, getting a room in an inn, selling his goods. It was all interesting. And the setting was different enough from the standard fantasy RPG setting that it was really interesting. Book 2 has a world where music is the highest form of art. In fact, city-states go to war with each other via music. John Van Stry is definitely good at creating unique worlds. Yes, I am sure he started out as a DM.

Now, the problems. He stays away from his unique trader story by the end of the first book. Such a shame. The MC going from city to city, from portal to portal, building up a city-portal spanning empire: Such a different series. Unfortunately, as he headed into book 2, John Van Stry abandoned this very different series premise and instead went along a very typical "MC as a kick-ass fighter". And yes he joins with several other kick-ass fighters with special abilities to go on a portal spanning quest. It really does feel like he just wrote up a D&D campaign he DMed where the MC and group were the players in his campaign.

And the other book 2 headscratcher where the MC and party go to music world, and the world totally uses 20th-century western instruments. Yes. Electic guitar, bass, and drum set etc. Really? come on. I want to suspend my disbelief as much as the next person, but it is hard to take. At least come up with a plausible reason to explain it away.

And some of the dialogue. It can get pretty bad in some places. The whole book reads like a first draft

Last but not least is the narrator. Sorry, but he is just not that good. Now, he is replaced in book 3, so obviously he got enough feedback, but for books 1 and 2 he is a liability.

I wanted to love this book. I really did. It had such an interesting take. I was even willing to put up with the narrator. Half way through I bought book 2 and 3 before I finished book 1. Too bad, it didn't turn out.

Would you consider the audio edition of Champion for Hire to be better than the print version?

Probably not. Quite frankly the storage issues with buying books is too great. Even if I liked the series. I do have the Kindle version of the book.

The Underlying premise is very good. The fact that there are hidden portals throughout the world where you can travel, and the gods of the various realms in their sphere's of influence, does make a good story. The only issue is there is a little too much "fantasy harem" stuff. I like it as much as any other, but honestly I wish it were tuned down a little

"The war" scene was my favorite. I like the idea of using historical tactics in a "new world".

The are infinite dimensions, but where will you find home...

I honestly liked the book a lot. I like the premise, and the narrator is quite good.

loved it, concept was excellent. fast paced and we'll worded. the story is very original and it draws you in. the narration very good with all sorts of infections.

Wow i really enjoyed this book. When I read the synopsis I got the impression it was going to be one of those D&D books where some modern guy falls though a hole and appears in a world worthy of a 20 sided die. I listened to the audio clip but it had only humans and they were using some old english words here and there. That was confusing. Where were the elfs? The other thing that struck me as different, was that... the writer and publisher are the same. Self published? I wanted something different so I gave it a try. I was blown away. This isn't a D&D book or a medieval setting found via a magic doorway. The title gives you a hint by using the word "portals". It's a parallel worlds book. Not only that but you latter find out that everytime someone steps through one they are changed to fit into that particular reality. This creates a lot of potential for future content being that in one reality you are an engineer in another you are a mage. Besides height and build alterations there can also be changes of species. Where would I put the tail when I sit? That is a question you might ask yourself if you buy the book.

really enjoyed the story. it has a lot of potential. i felt like the narration could have been better

I was happily surprised by how much I enjoyed this book, it's a good start to the series.

I found this to be a very good book. The characters are interesting and the plot is fun and engaging. It seems to be an excellent introduction into a larger plot which if as well done will be well worth my time. I am looking forward to it!