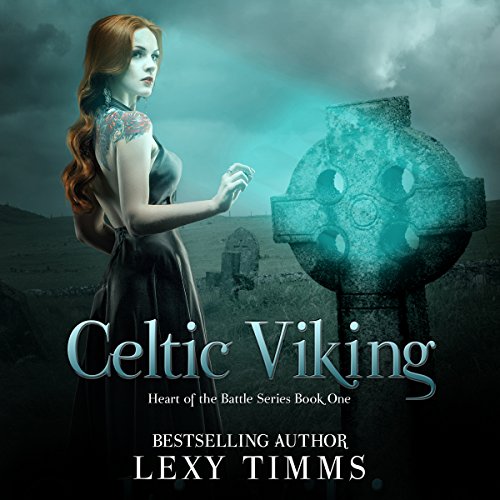 In a world plagued with darkness, she would be his salvation.

No one gave Erik a choice as to whether he would fight or not. Duty to the crown belonged to him, his father's legacy remaining beyond the grave.

Taken by the beauty of the countryside surrounding her, Linzi would do anything to protect her father's land. Britain is under attack and Scotland is next. At a time she should be focused on suitors, the men of her country have gone to war and she's left to stand alone.

Love will become available, but will passion at the touch of the enemy unravel her strong hold first?

What listeners say about Celtic Viking

Part of a Larger Story?

I just finished this and can't help but feel like this was written with the intention of being a standalone book. The story is well written but feels like it was just chopped into parts in order to sell more copies. While I generally understand this strategy and understand the importance of ending with a cliffhanger for those stories; but I almost feel like it is degrading to the author by implying that the book could not sell to a decent sized audience. This also precludes the book from receiving awards and making progress on lists and from being reviewed by publications. All of this being said, maybe the writing quality and story is lacking in the further installments. That would make sense of it being broken down into a series of short novellas. I have a feeling that this isn't the case. I will most definitely be reading the rest of the story in the series. The author and narrator both did excellent work.

I received a free copy of this audiobook from the author, publisher or narrator in exchange for an honest review.

Celtic Viking: Heart of the Battle Series, Book 1 by Lexy Timms is a good beginning to a larger story. It begins with Eric from Denmark leading Viking warriors fighting in The Borderlands of England in the 9th Century. Eric is everything you want in a hero- highly respected by his men and who takes no joy killing or pillaging, and one who loathes how many Vikings enjoy raping women from the villages they conquer as part of the "spoils of war." All Erik truly desires is land of his own, a wife, and a family.

Separately, we are introduced to Linzi who lives in the Scottish lowlands with her brother and father. Her family talks often about the war raging in Britain and prays that it does not move to the north. Shortly thereafter Linzi's brother and his friends sign up to join the fight about the same time when she starts to show interest in one of the friends. After her brother goes off to war, Linzi's father becomes gravely ill and she must venture out in search of the local medicine woman. It is while Linzi is outside her cabin fetching water that she stumbles upon Eric, who was deliberately wounded by an unknown Viking. Unfortunately this is where the story abruptly ends.

In fact, the ending is so sudden that you are left wondering if Audible only downloaded part of the story. This is disappointing because Lexy Timms does such a wonderful job of setting the stage for this very engaging story. What happened to "will passion at the touch of the enemy unravel her strong hold" as hinted in the synopsis? There is no passion and certainly no conscious touches between Lexi and Eric. Cliffhangers might be acceptable at the end of a season with a television series, but they don't work well in books. Even in trilogies there might be one overall story arch with three separate stories per book. Celtic Viking does not appear to be part of a trilogy, but instead appears to be only part of a serialized novel, with future installments in the works.

I listened to the Audible version of this segment narrated byHugh Loughlan, who did an admirable job. He read with a hypnotic brogue that was ideal for the setting and time period. His voice also fluctuated when appropriate to note urgency and emotions.

In short, this is a great beginning to a new serialized historical romance.

This audiobook was a good start to a three part series; however, it ends on a cliffhanger.

I liked this story was told from the POV of the two main characters, Erik and Linzi, and has great character development. Erik leads Viking warriors into battle for his "king" but would rather go back to his own lands to find a wife and start a family. Linzi, who is coming of age lives with her father and brother and helps take care of their farm. However, after her brother goes to fight in the war, she left to care for her father and the farm. Linzi and Erik's paths meet when she comes across him wounded and unconscious.

Hugh Loughlan did a great job narrating the story.

This audio book was provided by the author, narrator, or publisher at no cost in exchange for an unbiased review courtesy of Audiobook Blast dot com.

"I was provided this audiobook at no charge by the author, publisher and/or narrator in exchange for an unbiased review via AudiobookBlast dot com"

This story just ended. Eleven chapters of character and story development and then it just ends. Boom. What happens to Eric and Linzi? All that build up to what was beginning to be a great story and it was just over. I think this is another one of those books that you have to purchase several books to get the full story. I'm really disappointed and feeling cheated. Narrator was great

The performance was good. Enjoyed the narrator's voice immensely.

This book has the potential to be wonderful, however the historical inaccuracy completely ruined it for me. As a lover of history and historical fiction done well, I was immensely disappointed with all of the liberties that the author took. Vikings were not celts, and the author referred to these Vikings as Celts while giving them English descriptions, mannerisms, and dress. So many more issues in this very short book.

Celtic Viking by Lexy Timms is the first in this series and a first for me from this author.
I absolutely loved it and the narration was fantastic!
The writing was well done and the story was amazing, cant wait for more!

How dragged out and pissed off I am. Ten stupid chapters of bla bla bla. This book put me to sleep.

This book was full of historic action and characters. I really enjoyed it and want to read more from this author.

The narrator Hugh Loughlan is brilliant for this book.

This is a story of Vikings call themselves Celts. A beautifully written love story. I adored the setting, the characters and the story.