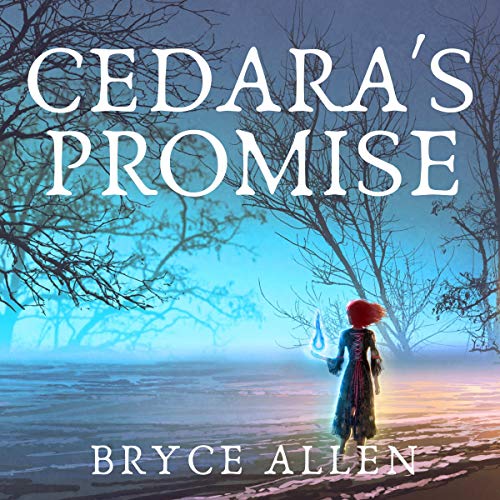 The hunt for Jenna Warden begins. A new Goddess emerges.

The mysterious Conclave has allowed Jenna and Oliver to enter. Jenna's Water Magi training will finally begin...but not everyone wants her at the Conclave. Rumors of a prophecy come to the surface, and other Magi worry that Jenna might be the one to fulfill it.

As rumors of the prophecy spread, the Church enters the fray. They send their hunters to stalk and destroy every Magi they find. Will Jenna's new abilities and her love for Oliver be enough to hold them off?

Solare and his force have barely survived Jenna's immense power, but now he has a new mission. Understanding Jenna's power might be the key to getting revenge on the Church and the Conclave... but the Church has other plans for Solare.

Some will rise to power while other descend into madness in this thrilling sequel to Born of Fire and Flood. Questions will be answered and world orders will be threatened.

What listeners say about Cedara's Promise

Jenna struggles to "find herself"

After the battle with Solare, Oliver takes Jenna to the Conclave where they get a rather chilly reception but Jenna is permitted to begin training. We meet some new entertaining characters, some friendly, some not. Jenna feels like she's constantly being judged and what she really wants to do is just wander the country with Oliver.
Solare realizes that the Church is his real enemy and set his plans in motion, but the Church is aware of him and there are Stalkers on his trail.
Allen Andrews does a great job with the Narration once again.
\\

Awesome addition to this series. Intense and captivating. Narrator was great. Ending with a "Well, whata you know" Can't wait to continue.
This audio was given to me in exchange for an unbiased opinion.

The Brother vs. Brother of the first book takes on many twists when they and Jenna go up against the Church and the Conclave both in this 2nd book. New, Strange alliances come together and if sounds confusing, I'm sorry. It actually takes just a little patience for all the pieces to finally come together for a satisfying ending. And, more to come in Book #?!?