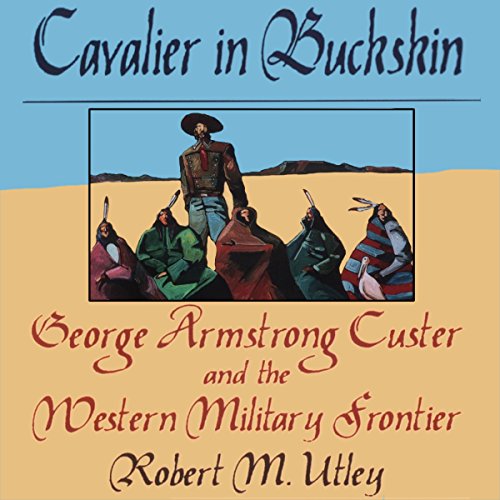 "Utley's excellent study has set the new standard against which all future Custer biographies must be judged." ( American Indian Quarterly)

George Armstrong Custer: The name evokes instant recognition in almost every American and in people around the world. No figure in the history of the American West has more powerfully moved the human imagination.

When originally published in 1988, Cavalier in Buckskin was met with critical acclaim. Now Robert M. Utley has revised his best-selling biography of General George Armstrong Custer. In his preface to the revised edition, Utley writes about his summers (1947-1952) spent as a historical aide at the Custer Battlefield - as it was then known - and credits the work of several authors whose recent scholarship has illuminated our understanding of the events of Little Bighorn.

"Utley combines a mastery of succinct, elegantly written narration with sound historical judgment based on deep understanding of the military and political milieu in which Custer operated." ( Illinois Historical Journal)
"An evocative book that expands the historiography on Custer beyond the extremes of the past to a more balanced and appropriate place in American frontier history and popular culture." ( American Historical Review)

What listeners say about Cavalier in Buckskin

One of the best to understand the man and the time

While there are some very good books about Custer in a crowded field, such as "Son of the Morning Star", " The Last Stand" and others, this book stands out as one of the best. Most works are clouded by the pre-set opinion of the author, and paint the man as a peerless hero, or a bloody glory seeking imbecile. Robert Utley does neither, and paints the picture of a man driven by ambition, patriotism, and possessed of a completely fearless nature, not unlike other Calvary Icons of his time. Custer was a fascinating man, and his story as well as that of the Seventh Calvary will be told for a long time to come. This is a great place to start, or continue a quest to understand the man. This is a great listen, with a great narrator.

An Excellent Unbiased History of Custer

CAVALIER IN BUCKSKIN was a treat to listen to on many levels. I listened to the audiobook written by ROBERT M. UTLEY and it was one I didn’t want to turn off. The life and legacy of George Armstrong Custer holds a fascinating place in American history that makes him one of the most bewildering yet iconic figures to date. I truly enjoyed listening to his story not only to learn more about his military service and duties but his personal life as well. This is an audiobook not to be missed. In my case, I live near Custer Hill and the Custer House and also the Cavalry Museum which are all historical places. The house is an almost exact replica of the original home which had burned down. I also live near where there were and are many Native American burial grounds. I’ve been to all the little communities that were established during the Indian Treaties and listening to this audiobook gave me chills thinking about all the history that surrounds me such as a small town nearby where every other year they hold a Native American Powwow.


This book gives an unbiased look at who Custer was from birth to when he attended West Point. It covers his career with the Army, from all his post stations to his ‘dash’ battle style and his many skirmishes. It details his dealings with the ‘Indians’ as well as his life with his wife Libby and why they never had children. Then there’s the famous “Custer’s Last Stand.” For me, he still remains elusive as to why he did what he did. It was a mindset of the times. It seems to me that he lived by the sword and died by the sword. Or in another word…karma.

I would definitely recommend listening to this audiobook not only for its historical value but also for the way in which it’s told. It’s very well researched and incredibly detailed. This history holds one of the most important places of our times. It’s a time that, with books such as this, will never be forgotten. It’s also a part of history that makes me wonder what it might be like had these events never happened. Where would the world be today? Where would we be today?

ROY LUNEL did an excellent job narrating this audiobook. He humanized Custer not only as a military and family man but also as a flawed man. It thrills me when a reader fits the story perfectly and he did just that. He spoke clearly and included voice inflections in the right places. All the way through the book he held the same pace with an upbeat cadence and gave this work an air of quality that was refreshing for this type of book. In my opinion this was a 5+ performance. It was outstanding. I highly recommend listening to this one.

Audiobook received in exchange for an unbiased review.

Hat's off to Robert M. Utley, for a true treasured portait General George A. Custer!

The story kept me coming back for more with this book. As always I want there to be more, but i get that all books have to end. I will definitely look for more by this author!