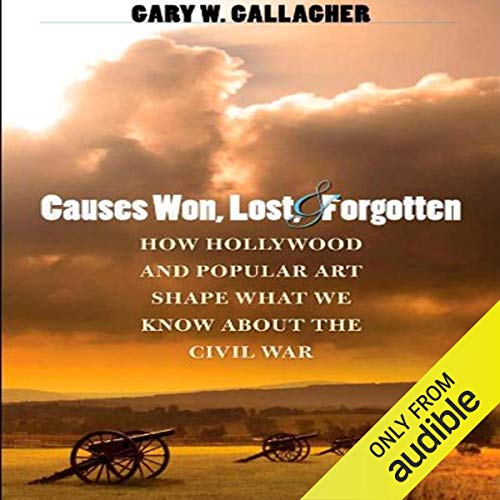 How Hollywood and Popular Art Shape What We Know about the Civil War
By: Gary W. Gallagher
Narrated by: Robert Pavlovich
Length: 6 hrs and 12 mins
Categories: Arts & Entertainment, Art

More than 60,000 books have been published on the Civil War. Most Americans, though, get their ideas about the war why it was fought, what was won, what was lost not from books but from movies, television, and other popular media.

In an engaging and accessible survey, Gallagher guides listeners through the stories told in recent film and art, showing how they have both reflected and influenced the political, social, and racial currents of their times. The most influential perspective for the Civil War generation, says Gallagher, is almost entirely absent from the Civil War stories being told today. This lively investigation into what popular entertainment teaches us and what it reflects about us will prompt listeners to consider how we form opinions on current matters of debate, such as the use of the military, the freedom of dissent, and the flying of the Confederate flag.

What listeners say about Causes Won, Lost, and Forgotten

Gary, your voice and cadence can't be replaced

Gary is amazing and this subject is fascinating to me. Great writing. the reading? ugh. technically his voice is pleasant but his cadence is like a computer. Gary, read your own books. your 24hour lecture of the American Civil War with great courses and your Lee's generals book can be listened to over and over again. I love your voice but more importantly, you know how to read your own sentence structure better than anyone. keep up your good work Gary, your one of the greats!

Repetitive - Foreword is the best part

First, let me say that I am a HUGE FAN of Gary Gallagher. I thoroughly enjoyed his Civil War Great Course. I think this book would've been better if he had read it himself. I listened to the Foreword and was intrigued and looking forward to it. But the Foreword was the best part--a great summary of the book. The book itself took too much time mentioning scenes from movies in great detail. I got to feeling like I was reading the Cliff Notes of each movie and wanted it to move along to get into what was incorrect about the movie or what has no basis in fact. I'd have simply preferred to hear his opinion of the movie rather than having the scenes repeated. In fact, because of the narrator, it was difficult to really tell how Gallagher felt about some of the movies. I think Gallagher should've been more forthright and said something like "This movie may be set in the time of the Civil War but bears no resemblance to the truth."

Lastly, the section on art was just excruciating. I did not need to know exactly how many copies of one painting of a Confederate general compared with the exact sales of US Grant's portrait. It would've been so easy to say that Confederate sales, in general, out-flank Union sales by 3-1. Then have a table of all the artists and the numbers of paintings that exist or were sold. But not in the text, over and over. I'd have rather read that the "Lost Cause" view contributes greatly to the sales for the Confederate side.

I was disappointed that more of the book didn't talk about how wrong some of these viewpoints are and how much they differ from the view point at the time the war started and how you'd never have found anyone at the time saying such things. It needed to be said that current views on political correctness which must by necessity be in modern films have skewed the view of the war away from the views in the 1860's. The one time he gave himself free-reign was the movie where the timeline was completely false and allowed Lincoln to get all sorts of things accomplished in what was actually two days.

Sums Up the Absurdity of Artistic Interpretation

The author lays out his case and backs it up very well. While I did not agree with every single thing he said, I have no doubt that his viewpoint is well justified and on a better foundation than my own.
Once again, Gary Gallagher has challenged me to think twice about whether history is based in fact or opinion.
This is a great book for anyone who is interested in the American Civil War.

Don't believe all that you see

This book discusses the many different way to look at civil war in events. I found it interesting but also a little deep. Of the Gary Gallagher lectures I have listened to I found this one the most tedious. I speed through the last two chapters getting the just of the matter. I Gus's we all like the south because they where the underdog. As most paintings sold depict southern generals. I would like to see Gary do a lecture about Ulysses S Grant.
I have the feeling this man is much maligned in the lexicon of lititure.
I am glad this book was short.