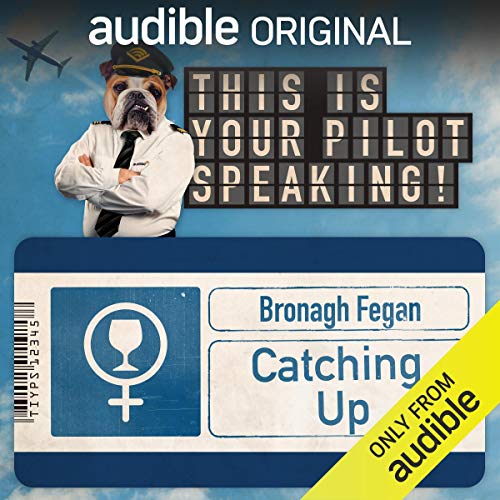 Carol, Sarah, Samira and Mac were best friends at university. They were the bright young things who had the world on a string and shining futures ahead. Now, as they find themselves tipping into their 30-something lives of work, relationships and responsibilities, they meet up for a big reunion night out, ready to recapture their shared past. Because whilst things may not have worked out exactly to plan for any of them...at least they will always have the comfort of old friends whose lives are even more weird, skewed and off-centre than their own.

A razor sharp, witty character comedy with a warm heart which will appeal to anyone (female or male) who has ever had an awkward evening catching up after an age with old friends.

What listeners say about Catching Up

This is a 30min. story about old college friends who get together to visit and catch up. I'm not sure what the point of the whole story was, but I'm sure we could see ourselves in at least 1 of the characters and know people who are like the others. I like that there arr separate narrators for each of the characters and I like how there are background noises rather than just the narrator (background noise of the restaurant, music, ringing cell phone)...makes it sound like it was an actual tv show. I would listen to these funny ladies again in another story. I recommend to women who like Chick Lit. Thx!

Decent enough to listen to while doing dishes

Not my favorite story. The performances were good, particularly The Waiter, and there were some funny bits. Overall, the story was pretty dry.

There was nothing funny about this at all. Bad dialogue, dysfunctional women, no story. Truly worthless.

I liked the other stories in this series but this charmless tale of horrid squawking harpies tormenting the staff of a restaurant they have no intention of dining at made me want to jam icepicks in both ears. Worst of all, Audible made it a 0.00$ "purchase" instead of giving it away & now
there is no DELETE button, THERE IS NO DELETE BUTTON!!! I just sits there in my library, with no delete or Remove button. I shouldn't be obligated for life to keep this shit in my library just because I was overoptimistic in my purchase. I want it gone! As soon as this free trial is up, I'm switching to Kindle.

Voice acting was passable but the writing was atrocious. This tries to be a catty girl's get together but only one is catty and the rest are border line manic depressives soccer moms trying to spice up their lives, and the catty one is just a whiny cow. The jokes fall flat, the timing is poor, and the tone meanders so much it's like the second act of a sitcom because the punchline is still coming.
Pass.

This is a top notch production! Better than what I was expecting! I couldn't help but literally laugh out loud several times while listening to this! Outstanding!

I had hoped this would be funnier

CATCHING UP WITH THE GIRLS: This Is Your Pilot Speaking, An Audible Original Pilot

Audible has created a few short pilot episodes of various serials and offered them up as free downloads. People are needed to vote for the best one and that one will continue to be produced.

Carol has been living in New York for the past five years. She has just moved back to England and her old friends have set up a get together at a local Wine Bar.

This meeting devolves into a
"bitch-fest". There were a couple mildly funny parts, but I actually found this audiobook more annoying than entertaining.

This "serial pilot" warns listeners at the beginning that they should "buckle up" because they are entering "the United States of Hilarity". This is flat out untrue. This was not funny in the least.

The only redeeming feature is that the full cast of narrators are all very talented. They do a very good job with poor material.

What would have made Catching Up better?

What was most disappointing about Bronagh Fegan’s story?

There was nothing about any of the characters that made me care at all about them. The story line was dull and predictable.

What character would you cut from Catching Up?

I was very glad when this came to an end. It it gets beyond the pilot stage, I won't be listening to it.

I really enjoyed this one. Very believable, very real comedy. Some of the outbursts/staning up for myself moments felt slightly forced (why is thos charactering snapping now, I would ask myself) but such is the limit of the 30 minute format. Definitetly want to hear more.

The dialogue was funny without sounding forced (which is something some of the other pilots have suffered from), a lot of the humour growing organically out of the conversation between the characters (it helps that this play had one of the stronger casts, in my opinion). It didn't start all that promisingly, though, with the burning menu seeming a bit too 'trying to be funny', which didn't suit the rest of the play. That I give the 'story' a low score is not to say it's *bad*, more a reflection on the humour arising from *character* rather than *plot*.

My overall feeling is that while this is the pilot that made me laugh *loudest* out the 5 presented, I don't think it could sustain itself over the course of a series (its basic premise, the characters catching up after a long time apart having been fulfilled). So while I would be interested in hearing more from this particular writer, I have to place this as my 2nd favourite overall in this selection of pilots.

Too close to home!!

Would you consider the audio edition of Catching Up to be better than the print version?

A strong cast with sensitive timing behind a powerful script helping ensure the audio edition is a winner!

What was one of the most memorable moments of Catching Up?

For me, it was pretty powerful to be honest. Being male, I would have expected to have found it difficult to relate to the characters in the audio book; however, that was not the case.By sheer convenience, I also have three male friends from uni, with the four of us meeting up simply too seldom, not really due, as it was in this case, to georgraphic issue, but more due to life pressure and male-uselessness issues.Whenever we meet up, there are always politics doing the rounds which can be tiring. It is always an event to look forward to,

I actually had the best chuckle at the very end, when Carole stated that Sara wouln't stop talking about herself, oblivious to what had really been experiened throughout.

A reunion after five years life experence post-Uni, these girls must surely have been able to make their mark and so share their success. But have they really grown up?

The book made it clear that everthing wasn't quite as rosey in the garden at it appearedby the end of sections which is an accurate life reflection in my opinion.

Where does Catching Up rank among all the audiobooks you’ve listened to so far?

Compared to other audiobooks I have listened to so far, Catching Up ranks highly; it is funny, lighthearted and enjoyable.

What other book might you compare Catching Up to, and why?

I'll be honest, this isn't the genre I'd usually purchase (I downloaded it because it was free). Because of this, I don't have other books to compare it to, but what I would say is that even if this isn't normally your type of story, it's still worth a listen.

I enjoyed the differing voices and the passion in the performances.

I liked the fun character voices and how the girls had different accents. This made it easy to tell the characters apart.
I would recommend this to any lady age 22 to 39

An amusing half hour of old university friends meeting up for the first time in years. Very well scripted and subtle enough.

Would you try another book written by Bronagh Fegan or narrated by the narrators?

No, really disappointed. Gave it a chance - made it 2 minutes to the end, it nver improved.

What was most disappointing about Bronagh Fegan’s story?

Weak and really not funny.

Don't bother listening to it!

Well paced, strong characters, well acted and funny - thumbs up (bbc intro (or was it audible?) little rough tho:)

The writer set up the characters straight away, you know how these women came to be how they are. The performances were excellent. I gave a 3 star for the story and overall as I believe more of the same whining and backstabbing would become tedious.

poor story, not funny at all. overall very poor. would not recommend. bad bad bad.