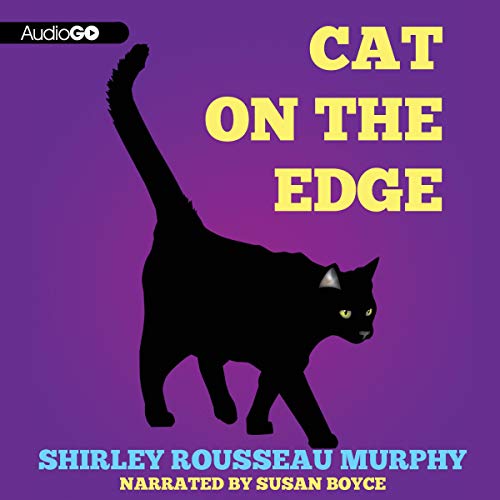 Cat on the Edge

First the large, powerful feline discovers that, through some strange, inexplicable phenomenon, he now has the ability to understand human language. Then he discovers he can speak it as well! It’s a nightmare for a cat who’d prefer to sleep the day away carefree, but Joe can handle it. That is, until he has the misfortune to witness a murder in the alley behind Jolly’s Deli - and worse, to be seen witnessing it. With all of his nine lives suddenly at risk, Joe’s got no choice but to get to the bottom of the heinous crime - because his mouse-hunting days are over for good unless he can help bring a killer to justice.

What listeners say about Cat on the Edge

Would you listen to Cat on the Edge again? Why?

Yes, it is so entertaining;I laugh every time I think about some of the scenes.

Jo Grey and his relationship with his human staff was the best part about the story.

She did a remarkable job portraying all the characters.

It's no epic novel such as The Kite Runners or The Story of Edgar Sawtelle, but certain scenes still make me laugh outloud when I recall them.

Fun and kept me listening!

Would you listen to Cat on the Edge again? Why?

I have read all the books in this series and going back to listen to them is a delight.

Have you listened to any of Susan Boyce’s other performances before? How does this one compare?

She does a good job with the various voices.

This series keeps me coming back. I feel I know the people in the village and care about how they are growing and changing. Of course the cats are the stars and they re believable along with their ancient magical heritage. There are many layers going on here that are interesting.

A little confusing at first.

I just finished this book. It was so strange & confusing! I almost didn’t finish it because I thought maybe I had read this out of sequence and missed the first book. So I started reading everything I could find about this book. Apparently the author has another book written in 1992 called “The catswold portal” about cats that can turn from human to cat and back. It is not part of this series and not available in audio but just reading about that book helped me understand this book so I was able to finish it. I also read that this first book is meant to introduce you to all the characters fir the future books in the series. The last half of this book was much more interesting and fun to listen to after I finally understood what I was listening to. Now I am looking forward to the rest of the series. And I wish I could listen to that book from 1992 on audio!

This story is from the cats perspective. While it is an interesting concept, this author spends way too much time on unnecessary detail. By chapter 6 I was wondering if the the pace would pick up. It didn't.
At chapter 11 the author was still dragging out the tale with background material. At chapter 2 the body should be found and the Police should be investigating a murder. It wasn't.
Well, as you can see I am bored with the story and have no interest in listening further.
What I want to know is where are the editors? Why haven't they told the author to cut out unnecessary detail, which is most of the story so far. Why were all the characters introduced at the beginning? For example, one character that was introduced at the beginning didn't show up again until chapter 11. In chapter 11 she becomes an active character and the story starts to flesh out.
Will the story get better? Will it pick up speed? Don't know and don't care.

First in an enchanting new series

Enchanting. I didn't recall how charming the first book in this long running series was. I've read the print book, and now I've read it on audio. Susan Boyce has brought characters to life using her voice and the words of Joe Grey and his human companion Clyde Damon, as well as Wilma Getz and her feline, the lovely Dulcie.

As the book opens, a man named Samuel Beckwhite is killed when a cloaked figure cracks his skull with a wrench while Joe Grey and Dulcie both watched in the alley behind Jolly's restaurant. Not only did they see the murder, the murderer saw Joe and Dulcie watching him and chased Joe all over town while the murderer’s partner chased Dulcie. Why would an "ordinary" man chase a common house cat as if he could relay the facts to the police or his human owner?

Both Joe and Dulcie were followed home. Joe runs away so Clyde and his animal housemates are not harmed. Dulcie has a harder time leaving Wilma who lives alone. When Wilma goes out she leaves Dulcie's dinner just outside the door, only the murderer has sprinkled it with poison that Dulcie detects. With a rumbling tummy, she turns to leave and runs smack into the bad man. Another chase ensues with Dulcie afraid for her life. Finally Joe Grey meets up with her, and they escape together. They take to the trees and rooftops.

Once Joe and Dulcie are safe, they discover that they have new abilities – that is, they can understand the human language. They can speak it, they can read it, and they can write it! How did they all of a sudden become sentient? They guess that the shock of watching a murder pushed them over the edge to this new state.

Joe is concerned about Clyde worrying about him so he decides to call Clyde. As Clyde answers, Joe Grey blurts out that it is Joe Grey, Clyde’s cat. Clyde is sure this is all a joke. He simply can’t accept it. Clyde knows just who to visit who will understand his conundrum … Wilma. Wilma relates that the two cats had been home for a short period because they’d pulled various foods out of the refrigerator (who does that?) plus seeing the shape an afghan has been pawed into, Dulcie and Joe Grey had cuddled in it. While shaking her head in disbelief, Wilma is even more surprised by Clyde’s story.

The man who killed Beckwhite had a Welsh partner. When he nears Kate Osborne, wife of one of Clyde’s auto mechanics, he whispers a Welsh saying, and suddenly Kate begins to shrink. Kate is now viewing the world from the level of shoes and skirts and swishing between legs. How is it that she’s so small? How is it that she has turned into a cat? The Welshman knows where Kate lives and goes there to wait for her. She makes it inside and begins to gather her belongings so she can leave town. It is then that she finds the foreign bank books behind her own on the desk. She takes them to the police the next day all while gathering together money and paperwork she’ll need. She also discovers that her husband has been having an affair, so she simply must leave. Kate knows the words to say to change back and forth into a cat, and she uses this to her advantage.

Kate and Clyde had been lovers and now friends for many years. Kate goes to him to share all that has happened. Clyde can’t believe it even though he’s just seen it with his own eyes. Kate begins to put together many facts and clues, and things begin to make sense. She even finds Joe and Dulcie to come up with a plan to get back at the murderer and his Welsh partner.

Does all this sound too unbelievable? This is a serious mystery novel in which some of the characters happen to be cats that can read and speak. It makes for some interesting sleuthing and clever ways to report in to the police without losing their anonymity. They just want to continue living their lives in Molena Point with the many residents we come to know over the upcoming books. And they want to help their friends whenever possible. This and the upcoming novels are all captivating stories of friends and neighbors and the lives they live side by side. They are a true example of community.

Just Not My Kind Of Mystery

Would you ever listen to anything by Shirley Rousseau Murphy again?

Maybe, but it would have to be something out of this arena altogether.

It was just too creepy. Cats understanding us and vice versa is fine. But, when people turn into cats and the frequent in depth descriptions of what cats find wonderful about killing and eating other animals was just too much for me.

I added this book thinking I would enjoy it as I love books with talking animals. The story was good but it was just too long.
I ve added a few more Joe Gray books to my library to give them a fair chance but we’ll see.

It was nice to listen to. I like cats and found cute the way she portrays them. It's a standard and somehow predictable story, which doesn't make it necessarily bad, but it's ok to listen to while doing things around the house.
I don't believe I'll be listening to the rest of the series though.

4-
This is a fantasy thriller where cats talk and read and shape shift. It is not usually my cup of tea since I am very partial to realism in fiction and am annoyed if the author requires that I accept paranormal events to drive the plot. I was able to moderately enjoy this book because I never felt that the author took the "talking cat" aspect all that seriously. It felt like she was in on the joke as well. The cats were just "catty" enough in their outlook to make me smile and go along with the story. I could have done without the human/cat transformations though; that was nearly a bridge too far for me.

But the book is fairly short and moves along. It is pure escapism, a light repast after the last two "serious" books I had finished. Audible offered it without charge along with several others in the series so I will try the next one when I just need something light that doesn't require any soul searching at all. Besides I like cats...

I’m a huge fan of the Joe gray mystery series they’re lighthearted and entertaining. I have a very vivid imagination and the narrator paints an awesome mental picture for me.

Shame about the accent

Loved this but clearly the narrator has no clue as to the difference between an Irish and Welsh accent!!!