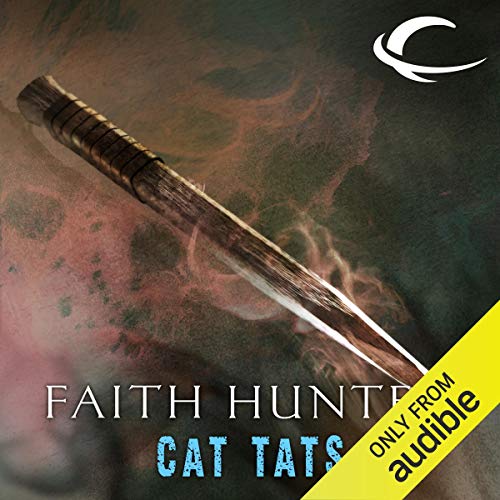 In this story from the Jane Yellowrock universe, undercover agent Rick LaFleur has been working on gaining access to Leo Pellissier, Master of the City of New Orleans. But he wakes up naked and bound in an old barn, at the mercy of a magic-working tattoo artist and an insane vampire.

What listeners say about Cat Tats

The tarot readings alone makes me want to take notes. Were all of the "forecasts" actually cases of going back to make the connections?

This is a fun short story, but be aware that it is an extract from one of the other books, not a new story.
Also be aware that while some of these 'shorts' are an hour or more long, others are rather less than that.
Very enjoyable listen anyway!

Is this a repeat of what is in the full length audiobook? If so, not worth my purchase.

I ❤️ this book as well as kit & all the other books in this series.

I adore any of Faith's work & this little story of the origin of Ricks tattoos also has a bonus tarot reading that you need to pay extra attention to!! bonus!!

I would have loved to see those cat tattoos. They sounded remarkable and art gallery worthy.

This was such a surprise. I found these books and thought they were just more stories about Jane in New Orleans. I had no idea what a treasure trove I had found and what I was in for. I was so happy at the end of my first book to find that these were stories of Jane’s history and how some of her backstories played out that are just referenced throughout the series. I also enjoyed hearing the stories from Molly’s perspective. It was money and time well spent.

When Rick gets his cat tats

If you a fan of this series or not this stand alone novellas is very well-developed. Rick is an undercover police officer who gets too close to a sexy female vampire with a score to settle with his family. She uses a witch to bind him to her.

What other book might you compare Cat Tats to and why?

This book is like the other books in the Jane Yellowrock series except Rick had not met Jane yet. It has vampires, witches and humans in it. It has the vampire planning to hunt another vampire who was felt to have done her wrong.

Which character – as performed by Khristine Hvam – was your favorite?

Rick is one of my favorites because of his character flaws, that of a skirt chaser, and as a policeman his push to do right

When the witch starts to help Rick by taking all but one of the handcuffs off of him. Trust at this time was a very hard trust to come to with the vampire holding the witches seven year old brother and molesting the child. . Rick is about to be bound to the witch.

You always want a back story on Rick LeFluer. This is a needed addition to the series. It gives a good example of Rick's character.

Having been reading this series, I knew that there was a story behind Rick's tattoos. I never expected it to be this one though!
Fabulous as always!