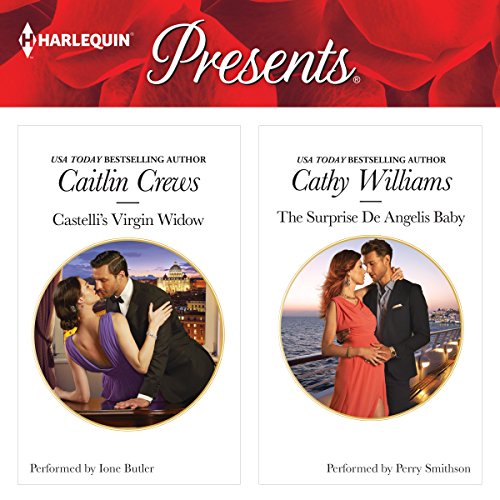 Reckless magnate Luca Castelli thinks he knows everything about his late father's widow, Kathryn. He won't be fooled by the tabloids' adoration - to his mind, this young, achingly beautiful woman is no saint! So when terms of the will force Luca to become Kathryn's boss, he resolves to push her to her very limits.

But as Kathryn rises to his challenge, the fire between them that burns with equal parts hatred and lust only grows hotter! Until one night, Luca discovers Kathryn's innocence runs deeper than he could ever have imagined. She belongs to him and him alone!

Billionaire businessman Daniel De Angelis' plan was simple: a few undercover days at sea to uncover the weaknesses of the ship he plans to acquire. Instead, he discovers a vulnerability of his own - gorgeous art teacher Delilah Shaw!

The terms of their liaison were clear: two weeks of complete sensual surrender that ends the moment the cruise ship docks. But stepping back onto dry land brings Delilah back to earth in more ways than one. Now she's facing two very shocking truths: Daniel lied about his identity while tempting her - and now she's pregnant with his baby!

Castelli's Virgin Widow: Narration was okay, but the story was irritating and lacked substance. The leading male character seemed bipolar and immature. One minute he was raging/insulting the leading lady's morals and the next he was kind/loving. This happened on multiple occasions, even after he found out she was a virgin. The climax of the story was resolved so abruptly that it felt like the author got bored with the story, and just wanted to get it finished.

Surprise De Angelis Baby: I was not impressed with the narration. I actually found myself daydreaming twice during the first chapter because his voice could not hold my interest. It may be a good read, but I couldn't force myself to listen to the narration.

What an insipid piece of garbage...

I can't believe they still make books like this. Typically weak and female trope, drawn to and rendered more stupid by a man who thrives on verbal, emotional, and mental abuse. Typical male "romantic lead" with deeply and constant misogyny, an infantile grip on his emotions, control, character, reality, and interaction with women being framed as "alpha", masculine, sophisticated, complex attractive. The characters are deeply infuriating. In real life he'd be considered an obsessive, workplace harassing, gutter-mouthed, sexually assalting, stalker that no one would allow near any woman they even remotely care about. And she, with her vapid and inadequate responses to a continuous onslaught of verbal and physical assault is to sputter idiotically, take it, and/or become aroused...in the guise of "innocence" and "femininity". It's all revolting. Gag.