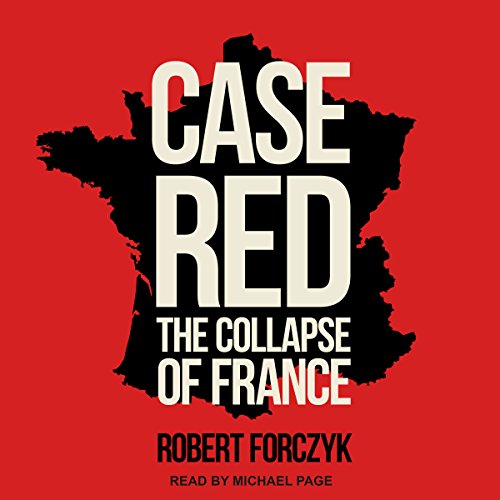 Even after the legendary evacuation from Dunkirk in June 1940 there were still large British formations fighting the Germans alongside their French allies. After mounting a vigorous counterattack at Abbeville and then engaging a tough defense along the Somme, the British were forced to conduct a second evacuation from the ports of Le Havre, Cherbourg, Brest, and St. Nazaire.

While France was in its death throes, politicians and soldiers debated what to do - flee to England or North Africa, to seek an armistice. Case Red captures the drama of the final three weeks of military operations in France in June 1940, and explains the great impact it had on the course of relations between Britain and France during the remainder of the war. It also addresses the military, political, and human drama of France's collapse in June 1940, and how the windfall of captured military equipment, fuel, and industrial resources enhanced the Third Reich's ability to attack its next foe - the Soviet Union.

What listeners say about Case Red

Robert Forczyk is my favorite WWII author. I listened to "Where the Iron Crosses Grow" probably a dozen times, each time picking up additional details. I thoroughly enjoyed "We March Against England." His thorough detail and keen analyses are unsurpassed. But this book simply did not translate well into audio. There were so many acronyms that it ended up sounding like, "The DCM of the 5th AMR took the full brunt of the 7th ICR." Perhaps if I had an acronym dictionary in front of me when I read the book, I might have enjoyed it, but listening to the audio book simply doesn't work.

The question as to why the French Army collapsed as quickly as it did during World War II has always been a mystery to me. France had a very large army that was thought to be the best in Europe, if not the world, yet the German conquest of France took only about 3 weeks. The accepted argument that France was splintered from within and had lost the will to fight before the war even began never seemed to ring true to me as Germany was a long time enemy of France and had invaded multiple times over the previous 100 years and most people, aggressive or not, will fight if their homes are invaded. Given that I was interested in this book and hoped that it would answer this basic question for me.

The title of this book, Case Red, represents the German Army's plan for the second half of the invasion, Case Yellow representing the first part, but more than half of this book describes the initial German invasion and the actions of the German, French and British forces and the development of the actual Case Red fighting covers only the last 6 hours or so of the book. The descriptions of the initial battles are interesting, but suffers from a basic failing of the audio version of the book, at least for me. The book uses the native German and French names of the individual battle groups, companies, battalions, divisions, and so on, and thus the listener has to thread his or her way through German and French names for organizations and their associated abbreviations. Thus, in one 10 minute or so section we have the following abbreviations - DI, DRDI, BCC, RMVE, RI, DLI, DIA, RTA, REI, ADA, DIL, CA, DIC, RICMS and others - and it became impossible for me to follow who or what organization was doing what was being described. This would probably not be much of a problem in the print version of this book but I found it impossible to keep up with what was going on in the audio version. While I could cope with the German descriptions, having learned enough German to keep up during my university education, I found myself completely lost in the French descriptions and this issue made me lose sight of what was being described and spoiled what should have been a very informative book for me.

The book was at least partially helpful as the author made clear his belief that it was the lack of proper armament and supplies that lost the war for the French rather than their fighting spirit, and he mades a good case that the French colonial troops, dismissed by the Germans as of little value, performed very well and were up to the fighting ability of the Germans.

The narration itself is fine and well done, but it has to deal with the print version and so I found myself constantly backing up to try to understand what had happened. In the end I gave up and may well buy the print (or Kindle) version of this book. I believe that there is an excellent book, but not in the audio version.

This book is excellent in describing some of the factors tat occurred before the start of World War II that weakened both the French and British as opposed to Germany. It is also excellent in its discussion of military actions in France AFTER Dunkirk until the surrender of France weeks later. The perspective of the author is more from the French than the British which is definitely not the standard post-War narrative. Strongly recommend this title for WWI buffs.

Not really suitable for audible

An authoritative book on the collapse of France in 1940, but it needs much heavier editing for audio narration, for example the lengthy references to units and equipment names, spoken untranslated in French and German makes the text very very clunky to listen to. I am sure this is a good book to have on your bookshelf if you are interested but by a paper copy don't listen to the audio.

far too many details

would have been a fantastic read but there are far too many details. it reads more like a series of after-action-reports than a novel history.

The Definitive "Fall of France" History

Extremely detailed yet approachable history of the Fall of France that avoids trying to merely rephrase history books written 50 years ago. Gives a fresh and heretofor little explored full systematic breakdown of one of the most important tragedies of the 20th century.

An in depth examination of France's peril in 1940

Amazingly detailed revealing account analyzing the strategy, the battles, and the political scene in France.

The closest thing to an honest look at the fall of France, that I’ve come across. Definitely recommend it!

Great History Regarding the Fall of France

If you like a detailed history with numbers to back up conclusions, this is a book for you. I have read many, many histories covering this time period and I feel this book does the best to explain the reason that France fell so quickly in 1940. Also the narrator was EXCELLENT.

The book is overly detailed. He should have focused on telling the story and less on trivial details, with which the reader is inundated.

as with all the authors books, very well researched and illuminating. A must read for anyone wishing to know more about a much neglected part of history.