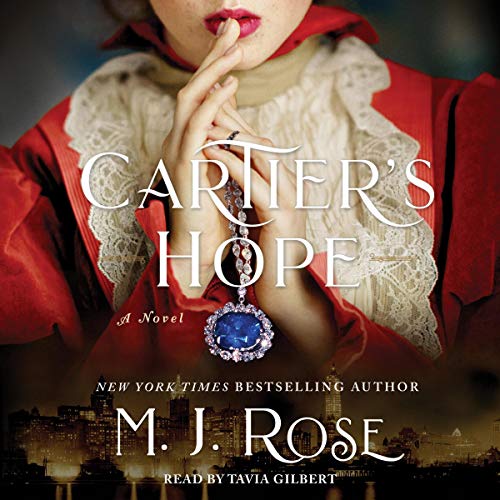 New York, 1910: A city of extravagant balls in Fifth Avenue mansions and poor immigrants crammed into crumbling Lower East Side tenements. A city where the suffrage movement is growing stronger every day, but most women reporters are still delegated to the fashion and lifestyle pages. But Vera Garland is set on making her mark in a man’s world of serious journalism.

Shortly after the world-famous Hope Diamond is acquired for a record sum, Vera begins investigating rumors about schemes by its new owner, jeweler Pierre Cartier, to manipulate its value. Vera is determined to find the truth behind the notorious diamond and its legendary curses - even better when the expose puts her in the same orbit as a magazine publisher whose blackmailing schemes led to the death of her beloved father.

Set against the backdrop of New York’s glitter and grit, of ruthless men and the atrocities they commit in the pursuit of power, this enthralling historical novel explores our very human needs for love, retribution - and to pursue one’s destiny, regardless of the cost.

What listeners say about Cartier's Hope

I started listening with enthusiasm but that all ended after the tenth chapter. I held on trying to force myself to the end but had no luck. This book was literally putting me to sleep. The story line drags on and character does not sound like she is in the right century. The narrator didn't help with her annoying accent either.

Strong Hero Who Happens To Be Female

Didn't want this one to end. I had a hard time putting it down. Historical fiction at its best. Beautifully read.

This was an excellent story. I loved getting a glimpse into the history of stones and the deception that was so common amongst the industry.
For an MJ Rose book, the story did miss a bit of the mystery that I am used to with her. But... still an excellent story.

Wow that was amazing story

MJ Rose is fast becoming my favorite author. The narrator was engaging and didn't let you go until the end.