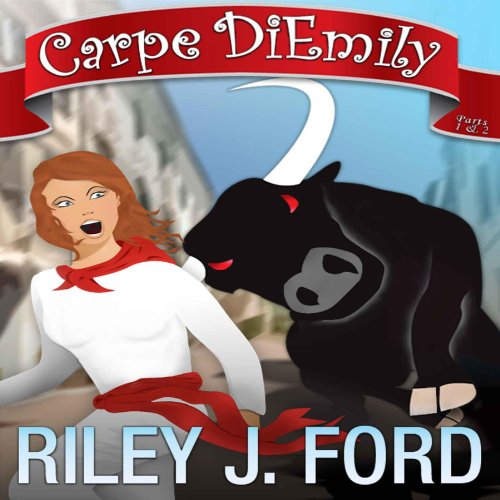 Emily Keane has her life all planned out. She's played by the rules and never stepped outside her box, and now she will finally be rewarded with everything she always dreamed of: a job promotion, a fiancé, and a future she can count on. But when her perfectly planned world falls apart, Emily is plunged into the wildest year of her life.

From the beaches of California to Jamaica, New York, and Europe, Emily finds herself on a madcap race against time, running from an unscrupulous organ broker who wants her dead, all the while checking items off her unusual bucket list. On top of it all, she's falling in love with the most unlikely person, a man who can never return her feelings...but will his friendship be enough?

Confronting one hilarious misadventure after another, Emily finally learns who she really is and how to seize the day...

What listeners say about Carpe DiEmily

Where does Carpe DiEmily rank among all the audiobooks you’ve listened to so far?

It ranks up there with the best.

What I loved about the story is the fact that the heroine starts off as someone who isn't very likable but changes throughout the story. She has a narrow view of the world and prejudges people based on her own misguided beliefs about them. During the story, two life-altering events happen to her that send her into a downward spiral to suicide. When someone unexpected shows up, her behaviors change and she begins to live her life and open her eyes to the realities she never saw before. In the end, you really begin to like Emily and feel a sense of connection with her. Her story is like real life. How many people do we prejudge until we get to know them? How many times are we wrong about something only to learn our mistake later on? These are the things that change us and make us grow. In this story, Emily grows and you share that experience with her.

Her funny and quirky style of narration, a lot like the author's style of writing. The part with the dog was hilarious!

If you could take any character from Carpe DiEmily out to dinner, who would it be and why?

Carpe liber! Sieze this book! You won't be disappointed!

WHAT AN ADVENTURE! Live life to the fullest!

This book was so much fun! It starts off with a woman who's life has fallen apart. She decides to write a bucket list and do everything on it within a year. Of course, given her luck, she has one hilarious misadventure after another! There are so many wacky characters in this book, so many crazy plot twists and turns, that I found myself laughing out loud in every chapter. The narrator does an excellent job of making this book both funny and easy to listen to. There is great character development in this book, too. Through her journey, the main character, Emily, learns about herself and what's really important in life. Oh, and I should mention I LOVED the very romantic and passionate love story that really picks up in the second half of the book! This book is really about living life to the fullest, in every area. One warning, though: there is some mild profanity in the book, so more conservative listeners might not like that aspect. It was right up my alley, though, with the perfect blend of modern sensibilities, humor, and edginess. All in all, a very funny and enjoyable audiobook. Can't wait to listen to more from this author/narrator duo. I just downloaded the Fifty Shades spoof, and it's already making me crack up. :D

Where does Carpe DiEmily rank among all the audiobooks you’ve listened to so far?

I vote Carpe diEmily as "Best Character Development"! It is number one in this area.

Simone was pretty awesome, but my absolute favorite was Emily. She starts off a bit stuffy and judgmental and assuming, but then grows so much to realize all she was wrong about. You really have to hear the whole story to completely grasp the beauty of the character development. What amazed me was how convincingly she was portrayed! You really believe her as this boring judgmental girl but you soon learn she is just sheltered and as she has these experiences over the course of the story she really turns her life around and becomes on of the most exciting characters I know!

What does Gillian Vance bring to the story that you wouldn’t experience if you just read the book?

Of all of the titles Gillian has narrated for Riley, this one was the BEST fit for her voice. She really captured Emily's personality here.

Yes and No. On one hand, I wanted to know what happened next! However, it was such a fun read that instead I listed to it whenever I needed a pick me up. There's a bunch of small adventures that are all part of a bigger adventure. Almost like a TV series! In fact, I could definitely see this one being a TV series :)

a little predictable but who cares!!!

this was a fun and entertaining listen. and this mandatory usage of more words is crap!!! 😃

This fantastic story made me laugh until I cried!! It is so original and funny. I’ve read it several times and now my family has listened to it in the car. Highly recommended!!

What disappointed you about Carpe DiEmily?

The language and sex. I feel it bordered on pornography. Can't recommend to my friends. I've been married many years and was ashamed to finish the book. It was a sad waste of money. Would love to be reimbursed for this.

Would you try another book from Riley J. Ford and/or Gillian Vance?

Maybe, depends on the cost.

no, wouldn't waist my money.

I just wanted to slap her into reality.

A heroine who showed some growth in understanding and maturity

Would you ever listen to anything by Riley J. Ford again?

Voice sounded as whiney as the character

Annoyance. Spent hours listening but wish I hadn't. Finally gave up 2/3 way through

(This review reveals the plot as set forth in the first 3 chapters.)

I told my co-workers I was reading a great book! This girl had lost her boyfriend, lost her job and was going to kill herself... but someone offers to buy her organs and gives her lots of money. Wow! What a great beginning. But by the middle of the book, I couldn't wait for it to end. Go ahead. Give them your organs. So sad. Could have been so good......