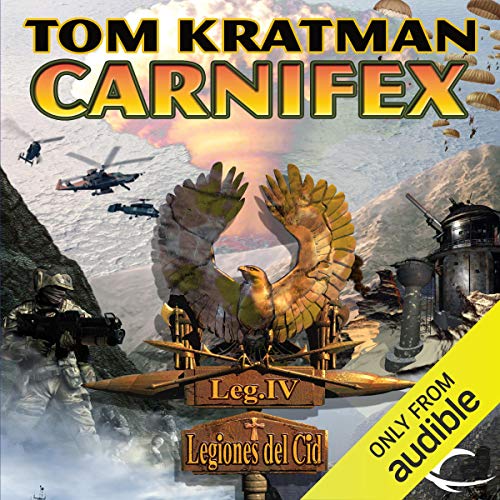 Patricio Carrera has been waging what amounts to a private world war to bring to justice the murderers of his family; He's raised an army and air force and used them. He's raised a fleet and he's about to use that. He's suborned one republic and is about to undermine another. He's tracked his enemies across half a world, breaking, in the process, any notion of international law that stood in his way. Now he's deployed his legions to Pashtia, penultimate hideout of the Salafi Ikhwan who have made him what he has become. But with each step further from his home, revenge seems no closer. And with each step he leaves behind him a little of his dwindling humanity. Revenge is a dish best served cold. Yet the trail itself grows cold, as cold as the snow-capped, windswept mountains of Pashtia. Only Carrera's hate still burns hot, and that's a fire that is slowly consuming him.

I would not complain..

if James Fouhey was treated to a couple of hours on a cross for many parts of this performance.

My 2 out of 5 rating for his performance is maybe somewhat harsh but I can not with good conscience rate it as 3/5.
There are several reasons for this. I will mention the main ones.
He totally butchers every inner monolog by dint of a whispering mumble that gets intensely irritating.
Many times throughout this series Tom Kratman injects certain military lectures on certain pet peeves that the main character has. They come across as probably being hard to follow if one where to read them oneself. Sadly James Fouhey just makes it X times worse. Fluctuating tone, sounds unsure etc.. When one ends up skipping forward and ignoring such to keep from loosing ones cool, well that's not good.
Dialects.. James is apparently just incapable of any coherent use of dialects. The attempts at dialects are also just on the whole terrible.

i have dusted these audio books off multiple times and listed to the whole series. its very much like a John Ringo series and just as satisfying. its no shakespear but its a east listen. I hope he keeps on with the world he built and uses thr next gen setup hes created for a new series.

This story would have been great if it had been told by a better author. Kratman has his military members highly trained to follow orders, and then has them question known-competent leaders when they give them. He has the earth fleet chain of command so strict that inferiors lie down flat before their leaders, and then has THEM question orders. The rhetorical technique is not worth the price of inconsistency. He also embarks on tedious and unnecessary explanations, sometimes in the midst of an action sequence His little boy does not act like a little boy; even genius little boys act like little boys. He also imparts hypocracy (whether by his character or his own) to the main characters by having them make tough, often ruthless decisions and then beat their breasts over them, only to take similar actions again later (and then beat their breasts again). He posits, in a heavily Catholic society, that a Catholic) member of that society believes that morality derives from familial instinct. Given the paradigm, it is obvious from whence the character would believe it derives. His antagonists are too often utterly over the top evil, bad, despicable and rotten, perverted, treacherous, sadistic and dishonorable. Did I also mention Bad? You get my point. He also over-uses cliches.

The narrator mispronounces, mis-inflects, and misses stresses words and phrases that a child wouldn't. Is he so ignorant of history that he does not recognize the word (and clever reference by the author), Arbeit? He pronounces it, "Are-be-it," for crying out loud! The entire book was a sequence of things like that- frequent steps from one jarring gaff to the next.

On the positive side, I found the story compelling, even with the horrible narration. I'd wager that if the narrator had been even a little less ignorant millenial-esque, the shortcomings of the story itself would have faded into the background. Alas, the reading just emphasized and highlighted the mistakes. Unfortunately I think I might have already purchased the next book. I probably won't listen to it. I will read it though. I predict that the author will be improving with time. I imagine he has alreasy beaten himself over some of the obvious mistakes mentioned above. His military knowledge is extensive (which sometimes leads him to the over-discursiveness mentioned earlier), and his sense of timing (when it is not being interrupted by long expositions on military doctrine, TOE, and characteristics of military equipment, or even the minutia of what essentially amounts to alternative history) is superb.