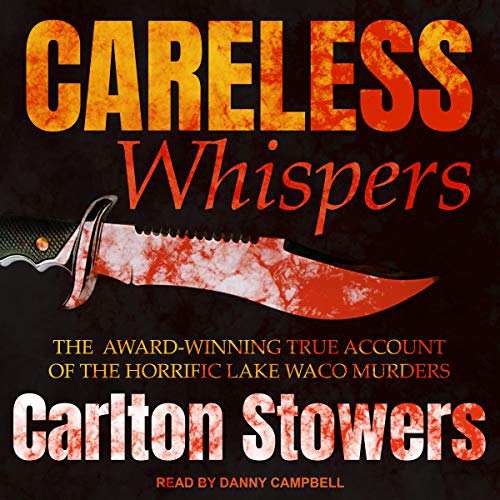 When the bodies of three teenagers were found on the shores of Lake Waco, Texas, in July 1982, even seasoned lawmen were taken aback by the savage mutilation and degradation to which they had been subjected. Yet only 52 days after the gruesome triple-murder was discovered, frustrated authorities suspended the case indefinitely.

Patrol Sergeant Truman Simons, who had been called to the scene that night, saw the carnage firsthand - and vowed to find the ferocious killer or killers. He soon became a man with a mission, risking his career and his family's safety in search of evidence. Plunging himself into a netherworld of violence and evil, Simons finally got close enough to a murderous ringleader to hear his careless whispers - and ultimately put him and his three accomplices behind bars for the brutal slayings.

Now, in his Edgar Award-winning account of the Lake Waco killings, acclaimed true-crime writer Carlton Stowers lays bare the facts behind the tragic crimes, the twisted predators, and the heroic man who broke the investigation - with important updated information based on new developments in the case.

What listeners say about Careless Whispers

Seriously? The narrator is not that bad!

Narrator is NOT a problem!
This is a good story, well written in detail. I read many reviews about how bad the narrator was. “Don’t get this on Audible.” They said. ”The narrator makes it unlistenable.” So I bought it on Kindle. I am just too busy to have the luxury of sitting and reading. So after reading just a bit of it, I bought it on Audible anyway. It’s not nearly as the reviews said. Unless you are extremely picky, the narration is fine. He does a fine job. It’s not the best, but it is certainly NOT THE WORST, by a long shot! I think the reviews claiming the narration makes it unlistenable are ridiculous! If all you do is focus on the narrator, then do you really even want to hear the book? C’mon! The narration is perfectly acceptable!

Excellent In Every Way

To begin with, I couldn't disagree more with the ageist nonsense found in an earlier review regarding the narrator's voice. The narrator does a totally pro job, infusing the text with passion and emotion, and he performs the dialog like the good actor he probably is. He sounds like a real person, which perhaps might confuse those more used to a slicker, smoother homogenized voice over. The writing is incredibly good - the author expertly takes you through the serpentine twists and turns in this chilling story - weaving in what seem to be disparate stories that suddenly circle back and become central. Highly recommend.

In Your Own Back Yard

As a Texan, I was aware of this crime. However, nothing prepared me for just how brutal the murders were. Carlton Stowers reminds us that murder is horrendous and victims deserve to have justice served. Listening to this book reminded me of just how quickly innocent people and their families can be destroyed when murderers prey on the unsuspecting.

When I first started this book, I was contemplating returning it. I was frustrated that I could not keep everyone straight. However not only did I start to enjoy it (regardless of not remembering who everyone was), after I finished it, I immediately started it over again and enjoyed it even more the second time. It's full of so many interesting tidbits and details about all the bizarre things that happened (my favorite parts were about a psychic who predicted everything). Was unsure about the narrator at first , but I began to absolutely love his voice and the way he performed the story. Fascinating book BOTH times!!

read the book after it came out also!!

the one girl mentioned here was a good friend of mine in high school, Beth Bramlett, they finally solved her murder..

This was an exceptionally well-written true crime book. I am very glad I used my free credit for this, and I will check out the author's other books. He really draws you into the characters lives and makes you feel like you know them and care about them. The murders, which I'd never heard about, were handled very respectfully. It's an excellent, fascinating story, much better quality than most true crime.

HOWEVER, the narration is awful. The guy who reads it is elderly and sounds like Susan Collins with a thin, shaky voice. It is very irritating and grating and really detracts from the excellent story. The whole thing is like listening to Pepperidge Farm Remembers.

The book is that good that I will definitely buy it in paperback so I can read it myself. I would skip the Audible.

When I saw this book on Audible, something led me to believe this was a new release on an old case. I looked up the case and saw that it was old. I saw the book had won awards, so I figured that there would be a big twist in the story, or that we would learn something new. If you are printing a book in 2018 about a case in 1982, there is a good chance that something of significance has occurred. It has good reviews, so I bought it. This was written in 1986. I was not overly familiar with the case, so I avoided reading about it, but I did see a few headlines that stated the wrong man was executed for these murders. So, I blame myself for assuming there would be more to the story. You can find this same story in summary on Wikipedia. This is a great book if you want to learn more about the case’s details and major players. Being under the assumption that this book was new, I did not enjoy the second half. It was mostly trial information. I was expecting to learn that they killed the wrong man after the trial section, but there is only about 30 minutes of information after the trial section to wrap up the story. This is a well written book. It covers a lot of ground. I could have hoped for a little more mystery in determining the suspects. I like stories that spend time following false leads. I like to follow the police as they figure out the names of the perpetrators. One of the victim’s dad was a suspect for a bit, but this book only mentions the fact. It would have been nice to been led to believe that he was the culprit for a little while. In sum, this book is standard fare. We learn about the victims, we are introduced to the perpetrators, we follow the police as they make the case, and finally we hear about the trial.

I was floored at how this man David was able to treat woman in Waco Texas. Those poor kids suffered and their families. Justice was served.

Where is Kevin Pierce?
Seventeen hours of this narrator was tough. He has a very weak and shaky voice that almost ruined a good book.
However, it was a great read.
I have to admit that I've become wary of police people recently and books like this make me realize how hard their jobs are and that a few bad apples do not make up a whole profession.
The main officer in this investigation was relentless in his efforts to find the truth.
I also give the author a lot of credit for his compassion for the victims and their families.
I will look for more books by Carlton Stowers.
A gripping and very sad tale.

Well written account of the Lake Waco murders. The narrator does an excellent job of navigating the reader through the twists and turns of the investigation and how it was finally solved.

This is an interesting true story. Sometimes things are hard to prove without an eye witness or before DNA, step in Trueman Simmons. We need detectives like him that are not willing to give up at the first hurdle. It's the family I identify with having been in a similar situation myself. I can fully understand the hatred for the defence lawyers.