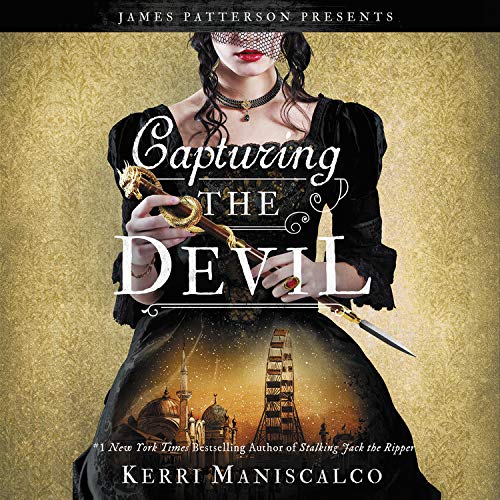 In the shocking finale to the best-selling series that began with Stalking Jack the Ripper, Audrey Rose and Thomas are on the hunt for the depraved, elusive killer known as the White City Devil. A deadly game of cat-and-mouse has them fighting to stay one step ahead of the brilliant serial killer - or see their fateful romance cut short by unspeakable tragedy.

Audrey Rose Wadsworth and Thomas Cresswell have landed in America, a bold, brash land unlike the genteel streets of London. But like London, the city of Chicago hides its dark secrets well. When the two attend the spectacular World's Fair, they find the once-in-a-lifetime event tainted with reports of missing people and unsolved murders.

Determined to help, Audrey Rose and Thomas begin their investigations, only to find themselves facing a serial killer unlike any they've encountered before. Identifying him is one thing, but capturing him - and getting dangerously lost in the infamous Murder Hotel he constructed as a terrifying torture device - is another.

Will Audrey Rose and Thomas see their last mystery to the end - together and in love - or will their fortunes finally run out when their most depraved adversary makes one final, devastating kill?

What listeners say about Capturing the Devil

Wow! What a fantastic book. It kept me on the edge of my seat, brought tears to my eyes and kept me wanting for more. I couldn’t get enough of this book, just when I thought it would go one way, it went another. It tied up all ends nicely and I thoroughly enjoyed it.

I will miss you Thomas Cresswell and Audrey Rose. After these adventures, I feel like I'm saying goodbye to my closest friends. These stories have changed me and helped me through a truly dark time in my own life. Thank you Kerri Maniscalco for gifting the world with these incredible pieces of art and history. I can't wait to read whatever you have next.

I’ll admit, was a bit nervous going into this book given that I didn’t particularly like book 3. After reading it, I’m happy to report that I was not disappointed! This was a great conclusion to the series and offered everything I loved about the previous books. The plot was exciting and engaging, I did figure out the twist a little before it was revealed, but to be honest I felt pretty satisfied about that rather than disappointed. I love Audrey and Thomas’ relationship so much, their banter is fantastic and I love the support and acceptance they offer each other. The side characters were less prevalent in this book than the others, but I did still like the time we got with Thomas’ and Audrey’s families. This book wasn’t without its faults, there were a few plotlines that seemed to be dropped for most of the book and Audrey’s internal monologues are prone to melodrama. However, I was having too much fun with the rest of the story to really care about these flaws. The narrator did a fantastic job bringing the characters and atmosphere to life. Overall, except book 3, this was a really fun, addictive series and I really enjoyed reading them.

Season 8 of Game of Thrones

I have been a huge fan of this series since Stalking Jack the Ripper and was too excited to finish the last installment. Keri's other three books were full of murder, science, and romance. All of my favorite things! They were the perfect blend that left me satisfied and excited for the next book, the final book was a rich dessert after a perfect three-course meal. Like a super-rich dessert, I could only stomach a little bit at a time...Thomas and Audry Rose got a lot of passionate screen time which, in my opinion, took over the story. I felt that the added elements of Thomas's father ruining their first wedding was interesting at first but didn't amount to anything in the end...it didn't impact the "capturing of the devil" aspect of this story. I actually felt that too much of this book was dedicated to Thomas and Audry's relationship and not enough on the mystery. The "clues" they found were so obscure and random that I was lost...Audry and Thomas seemed lost too as their clues were pointed out by other people most of the time. There was a lack of bodies, compared to the other installments, and the H.H Holmes hotel and Worlds Fair were vastly underwritten. I was very disappointed as I was soooo excited to see them use his gruesome history to make this book really pop. I didn't like how his character was written and his motives, while in life were never truly known, went way beyond the fixation of just one person. The confrontation was brief and felt anti-climactic. I loved the first two hours and the last hour of the book...the rest, to me was slow and had a misguided focus, compared to the others. I was a bit disappointed with this ending, Not Game of Thrones season 8 disappointed but kind of close. Still, I love Kerri's writing and look forward to more of her work. Nicola Barber was also amazing, as always.

Very sad that this is the end. but very good ending for Thomas and Audrey Rose

I had eagerly finished the other books in the series, eagerly awaiting the endings. I had this book pre-ordered, and was so excited I had the physical copy and had to download the audible version. This was more of a drama. It was hard for me to get through the book, and I had hoped it would get better. I had a few good parts, but was hard to read. I’ll be returning the audible version for this one.

I absolutely loved this book. It was such a wonderful conclusion to the series although I think she could totally continue it as an adult series and I would definitely read that! I loved the way the author twisted the series and gave you a few wait what (!) moments. I loved how she allowed Audrey to really shine in this story while continuing the romance of the couple and not letting either overshadow the other. The narrator as always did a wonderful job and really drew me into the characters and storyline. I am sad to see the end to this book but can’t wait to see what the author writes next!

These books need to be a television series. So sad the finish the last book.

Best in the series. The only thing I didn't like about it is it's the last one.

I'm not a huge fan of romance novels but the way Kerri Maniscalco wove murder with romance was simply amazing. Just don't go into this book thinking it's gonna be non stop mystery and mayhem (though there is plenty of it). This was a fantastic end to a fantastic series. I am left with one question after everything is wrapped up. Why did Minnie call Henry Harry???

I love the whole Series~!

I loved the wholw series. All four books are amazing~! There were some parts that got to me, some amazing, some good, some dramatic and some bad (in a good/great way). So many emotions I felt hearing the stories in each book, all the twists and turns, the details in each sentence. Though I wish there could have beem a bit more detail but other then that, I loved the series. I am super sat it had to end but I am happy I will have the audiobooks with me for how ever I will live. I absolutely love this series and happy to have it in my collection.

Satisfying end to the series

Overall I really liked the book. I love the relationship between Thomas and Audrey Rose. Their exchanges are the greatest. I was however not happy with the “big bad” in this book. I saw it coming halfway into the book and was disappointed at how she linked book 1 and 4. Big stretch and not done well in my opinion. I’ll probably go back and read the whole series over again, and maybe this one will get a better rating then.

I know you say this is the last book of the series but would love it if more comes!

The last and final book of this series. A great finale and a great ending of the story of Audry Rose and Thomas. I have really enjoyed this series and I really hope they are making movies of this series. It's all adventure and mystery which will make a great TV-show. I like the ending of this movie though it happened a lot in the last chapters, which sometimes can be a lot for a reader to understand. But if we set that at the side it is a rich book with rich language and description, which is easy for a reader to "see" what is happening. Once again, a great book series!

i really enjoyed the series (book 3 perhaps not so much) Interesting concept, not without its flaws, and definitely YA but enjoyable all the same

I love this narrator. She is absolutely amazing! Such diverse voices in all the books.