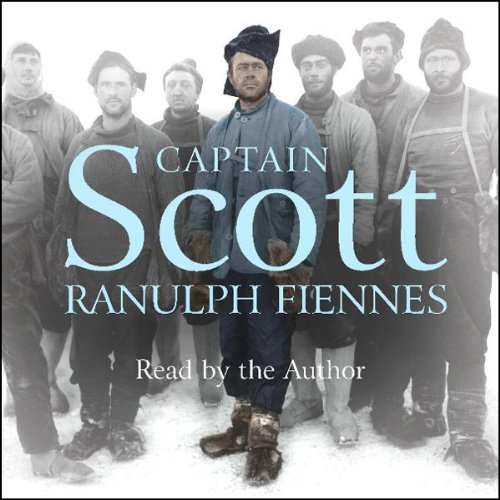 The real story of one of the greatest explorers who ever lived by the man described by the Guinness Book of Records as ‘the world's greatest living explorer’.

Sir Ranulph Fiennes is uniquely qualified to write a new biography of Captain Scott. This is the first biography of Scott by someone who has experienced the deprivations, the stress and the sheer physical pain that Scott lived through. Ranulph Fiennes tells the story of Scott’s life – and discusses how his achievements have been viewed after his death – with empathy and great skill.

What listeners say about Captain Scott

If you could sum up Captain Scott in three words, what would they be?

What was one of the most memorable moments of Captain Scott?

One of the most graphic and intense images I've experienced in a novel was the discovery of Oates' collapsed body. I could feel the non-fiction frostbite burning his non-fiction flesh. Intense.

Which character – as performed by Ranulph Fiennes – was your favorite?

There were a couple of moments in the book that moved me - one was when the team had finally reached the pole, only to discover that Amundson had already been there. The other moment was when the team reached their depot only to find it was not well supplied (fuel had leaked).

The story was great - a non fictionalized account of the last great earthly expedition. It was well narrated, with the annunciation and precision that only the English could offer, but it did get a bit distracted at the end I felt as though throughout most of the novel that Sir Fiennes was acting in defense of Scott, even though Sir Fiennes declared that this would be a transparent view of the events that had transpired. The mask really came off during his 20 'or so' minute rant at the end of the novel. I felt that was unnecessary. Other than that, I can't imagine a better person to provide insight into a journey of this magnitude. Sir Ranulph Fiennes was very appreciative of the efforts that this journey would have taken. Details of equipment (tents, boots, et al.) were welcomed. The author provided a credible level detail and insight that could be matched by few (if any) others on the planet. Aside, observing Sir Fiennes body of work, I believe him to be the inspiration for the fictional Dos Eqies spokesperson - The World's Most Interesting Man.

The story of Captain Scott is both amazing and inspiring although I was disappointed with how boring Ranulph was able to make the epic tale sound.

Would you consider the audio edition of Captain Scott to be better than the print version?

This audio edition is better for a simple reason: Ranulph Fiennes' narration. Definitely a good storyteller.

What other book might you compare Captain Scott to and why?

If you are looking for historical detail, Fiennes' own "Race to the Pole" is better source; but it's 3 times as long. If you're looking for the same high-level details but with a tighter storyline, go with this one.

The slow trudge back from the Pole, defeated and starving, is incredibly moving.

Definitely made me sad.

Absolutely brilliant book and although Ranulph Fiennes is careful to present the facts, it is clear that Scott has indeed been misjudged and poorly treated in some quarters. This book is a masterpiece in unpicking the truth in "righting some wrongs" and not only is this a very moving story but beautifully read by the author. I would strongly recommend this book to anyone who is interested in true polar history. One of the best polar books I have had the pleasure in reading.

A realistic unbiased book , at last giving a true hero some of the credit he and his intrepid companions deserve. Debunking the debunkers !

I am an avid reader of polar expeditions, and seen most documentaries out there. It has bothered me for some time the negative image I was presented of Captain Scott, and then I listened to this book. Very good, excellent portrayal of Scott without melodrama or exaggeration. It is much helpful when Fiennes compares Scott's odyssey to his own, givind details of what he went through.
Updated with the latest scientific data as to weather and conditions under Scott's travel, gives a better understanding of what these men had to go through.
I like the fact that he seems very partial to my favorite, Schackleton, and even to Amundsen (whom I also love and loath).
I was a little bit bummed by the author's voice at the beginning but it went over quite quickly.
I seriously recommend this book!

thank you once again for writing such captivating material for this armchair adventurer! greatly enjoyed.

Ranulph Fiennes is obviously a well respected explorer in his own right and no doubt that's why he was chosen to read this account, however he is not a voiceover artist. Not only is the quality of the audio pretty poor but Fiennes delivery is f*king abysmal. He must have recorded it himself and then emailed it to the publishing company. I bet they just cast him without doing a test record and when the first audio files came through from Ranulph they realised what a massive mistake they made. He has the most monotone emotionless delivery imaginable. It's the perfect case for increasing funding in AI.

Ran Fiennes wrote this book to balance the less than flattering picture of Captain Scott as portrayed in Roland Huntford's book, The Last Place on Earth. The only problem is that this book is as biased towards Scott as Huntford's was against him. To be fair, not quite, but getting there. However, I am a fan of Ran Fiennes and hugely enjoyed his take on the retelling of this epic story. Scott was an enigmatic figure but I have long admired him for his courage and steadfastness to the end.

Brief but brilliant story narrated by the excellent Ranulph Fiennes. Would thoroughly recommend. The author gived a balanced view of Scotts achievements and character

A very interesting story although sometimes Fines is a bit monotoned. Still a very good listen and i learned a lot

Brilliantly told by a National Treasure.

Gripping tale of an expedition into the unknown by Fiennes pulling first hand experiences and on diaries from the original members of the crew.
Couldn’t stop listening.