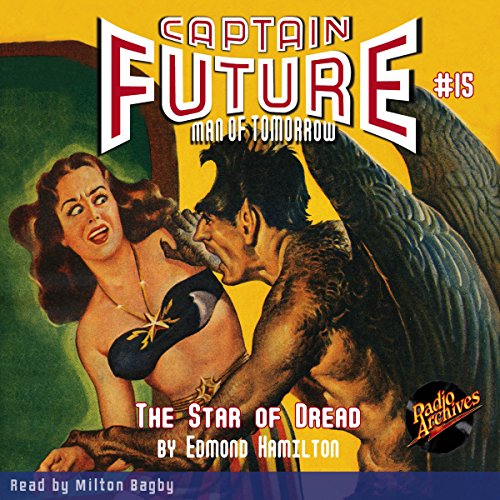 The world's greatest space-farers battle to expose a dangerous secret menacing mankind and face desperate risks as they pursue two scheming miscreants across the void!

From out of the pulps, Captain Future flies into action, displaying the most exciting aspects of Science Fiction. Although modeled to a degree after Doc Savage, Captain Future is also the ultimate space opera hero. Coming complete with not only a tragic, yet inspiring origin story, driving him into defending interstellar justice, everyone and everything Curt Newton encounters is colorful, vibrant, and over the top - definite trademarks of the best space operas.

A space hero most definitely requires a spacecraft, and Captain Future's was one of the most memorable. Leaving its own distinctive rocket trail across the stories, the Comet was the ultimate ship for the perilous, mysterious missions the Captain and his companions undertook. From fighting battles above strange planets to studying strange minerals and new alien races, the Comet itself could be a mystery, having the unique ability to hide in plain sight in outer space, camouflaged as an actual comet.

Published from 1940 to 1951, Captain Future stories initially take place in the far flung year of 1990. As the series progressed, Hamilton moved away from pinning the ongoing adventures to a particular time and focusing more on forming continuity, where stories built on one another. This allowed for a freedom of imagination, for Hamilton to tell stories without restrictions. That liberty of creativity translated to the covers of the Captain Future magazine, brilliant colors and eye-catching designs brought to life by three artists, including Earle K. Bergey.

Rocket into science fiction adventure and discover new worlds. Ripped from the pages of the Summer, 1943 issue of Captain Future magazine, The Star of Dread is read with wonder and excitement by Milton Bagby.

What listeners say about Captain Future #15