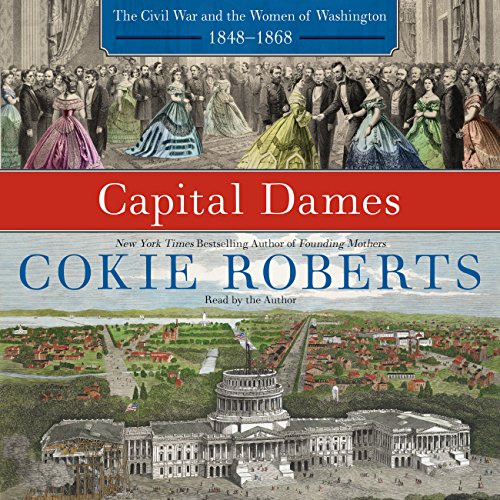 In this engrossing and informative companion to her New York Times best sellers Founding Mothers and Ladies of Liberty, Cokie Roberts marks the sesquicentennial of the Civil War by offering a riveting look at Washington, DC, and the experiences, influence, and contributions of its women during this momentous period of American history.

With the outbreak of the Civil War, the small, social Southern town of Washington, DC, found itself caught between warring sides in a four-year battle that would determine the future of the United States.

After the declaration of secession, many fascinating Southern women left the city, leaving their friends - such as Adele Cutts Douglas and Elizabeth Blair Lee - to grapple with questions of safety and sanitation as the capital was transformed into an immense Union army camp and later a hospital. With their husbands, brothers, and fathers marching off to war, either on the battlefield or in the halls of Congress, the women of Washington joined the cause as well. And more women went to the Capital City to enlist as nurses, supply organizers, relief workers, and journalists. Many risked their lives making munitions in a highly flammable arsenal; toiled at the Treasury Department, printing greenbacks to finance the war; and plied their needlework skills at the Navy Yard - once the sole province of men - to sew canvas gunpowder bags for the troops.

Cokie Roberts chronicles these women's increasing independence, their political empowerment, and their indispensable role in keeping the Union unified through the war and in helping heal it once the fighting was done. She concludes that the war not only changed Washington, but it also forever changed the place of women.

Sifting through newspaper articles, government records, and private letters and diaries - many never before published - Roberts brings the war-torn capital into focus through the lives of its formidable women.

What listeners say about Capital Dames

Roberts did extensive research including diaries, newspapers, government records and private correspondence. She narrowed her research to Washington D.C. and the women of the city.

As in other wars women took on new roles such as becoming nurses, forming social service and relief agencies. Some wrote propaganda, some even became spies. Women took on positions once held by men and black women founded societies to help the displaced slaves. The Civil War expanded the role of women in politics, health care, education and social services.

Roberts writes about the unknown and the known women such as Mary Todd Lincoln and her seamstress Elizabeth Kockley, abolitionist Josephine Griffing, Clara Barton, Sara Agnes Pryor and on the confederate side Varnia Davis wife of Jefferson Davis.

Cokie Roberts wrote a delightful tale that provided so much information, she also narrated the book.

How can you go wrong with such a smart, interesting compilation of real life stories of women in Washington during the civil war. I read her other book about the women during the Revolutionary War so having this one read by the author was a extra special treat. I liked everything about it.

I couldn't love this more!

This is one of my very favorite Audible Books! Maybe these factors made it "just the thing" for me: I lived and worked in Washington DC for many years, always enjoying and absorbing the history of the famous places while always recognizing that the social underpinnings were the real story. And now, retired in West Virginia, I'm close enough to make regular visits to Antietam, New Market, Gettysburg, Bull Run, and all the memorable and tragic battle sites. So! This book fills in the blanks, connects the dots, and gives me the picture from the viewpoint of the splendid, diverse, and courageous women of the Civil War.

I am a long time fan of Cokie Roberts as she gives us the inside scoop on her NPR guest spots. Who would be in a better place to tease out the important events...social and otherwise...of this fascinating era? After all, she is a Capitol Dame herself. I love her voice and her way of pausing at just the right places. No one could deliver the inside story as well as Cokie.
Overall...What a splendid experience! I highly recommend it!

It was wonderful to hear Cokies’s voice fill our minds with the details of the past. The women of the time she tells us of are true inspiration.

Well researched, well cited. Interesting stories of known and unknown women who made a difference

Really, really enjoyed it.... I just wish there was more!

As I said above, being a southerner, and steeped in the background around me as I grew up in Louisiana, I loved every minute of these stories. I remember going to visit some of the old plantation houses when air was growing up, and how excited and happy we all were when it became fashionable to completely restore them, and put them to work again. These stories brought back some of the tales I heard as a young girl, and I was standing in parlors once again, watching people with famous names walk by. It was enthralling!!

Wonderful history of women of the time.

I learned so much of the back story of the Civil War. I love history and this was a different prospective of life during those years. The research was meticulous, but not boring. I enjoyed this book very much.

I find it humorous that some society think of women as the "weaker sex". This book shows just how formidable and passionate women can be about a cause close to their hearts. What a great book!

loved this book...what great real stories and so sad when it was over!! I want another!!!

This is one of the best history books I've had the pleasure to read. A Pleasure because it is an extremely fascinating topic that one wouldn't have thought of an important part of the history of the American Civil War.

As it turns out, it is so essential to an understanding of the *real* behind the scenes operations of Washington politics that I'm surprised this shouldn't be required reading for students of the subject.

Having the author read the book is keen and essential: beyond her wonderful broadcast voice, Cokie Roberts knows where the inflection should be in the story, and inserts the audible "wink-wink-nudge-nudge" where needed in the story, without distracting the reader from the context.

And yes it is indeed a story first, and a history second. With so many characters to follow, it's difficult not to have a few favorites and follow them through the years.

The only glitch I found with the book was that in some sections she will jump back in time to catch us up on a particular character in such a way that one might feel as if something has happened to the recording and it's skipped around in chapters. No: it's a matter of going back a few years, and catching the reader/listener up with a particular character to the point where she is in the book at the time. But some listeners may find this a bit jarring.

But hang in there - that small bump is worth the treat of this exceptionally well-done book on a fascinating topic.