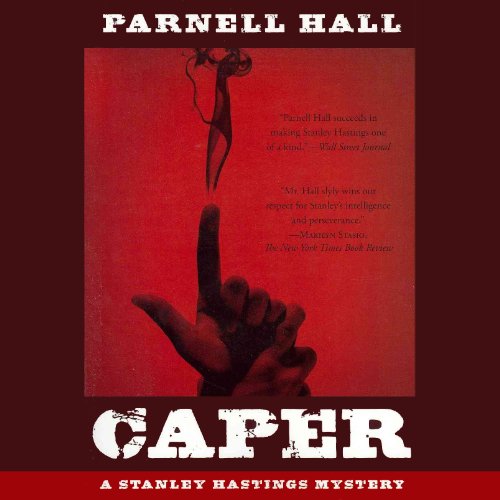 Talented voice actor Christopher Kipiniak reads the voice of narrator Stanley Hastings with the perfect blend of self-effacing, droll humor. In Caper: A Stanley Hastings Mystery, the 12th in a series by Parnell Hall, listeners again get to enjoy Hastings' antics. Thrown for a loop when a beautiful woman hires him, Hastings, the Woody Allen of private investigating, stumbles into an adventure based on his own insecurities and flaws. This neurotic PI is at it again with the same humanity and humor as ever.

The latest in the beloved Stanley Hastings series - the unlikeliest private eye in New York City, who doesn’t even carry a gun.

Poor Stanley Hastings. After getting hired by a hit man and nearly getting shot, the put-upon PI needed some fun, so when a gorgeous damsel in distress walked through his office door she seemed just what the doctor ordered.

The fair maiden turned out to be a married mom who wanted Stanley to find out why her teenage daughter was skipping school. Playing truant officer wasn't exactly Stanley's idea of fun, but at least it should be easy.

Stanley being Stanley, nothing goes right, nothing is as it seems, bodies start to pile up, and faster than you can say 'fall guy', guess who's left holding the bag?

Before the case is resolved, Stanley will be nostalgic for the good old days, when all he had to worry about was a hitman.

What listeners say about Caper

Did not care for it

It wasn't so much the story. It's that I got an audible book,
and I've had a few, and this narrator's voice was not right
for the part. It was actually distracting and I am going to
ask for my money back half way through the book. I wouldn't
mind getting the book later and reading it, but I won't get
another Hall book with this guy reading. BTW, I have NEVER
asked for my money back before for a book of any type.
That should tell you something. But maybe it's just me.

Got it for free and I want my money back

This is got to be hands down the worst book I have ever gotten from audible. The storyline is a weird combination of dated old-timey sayings and new technology handled by the characters. The main character is nothing more than a snivelling no self confidence having simp do not waste your time