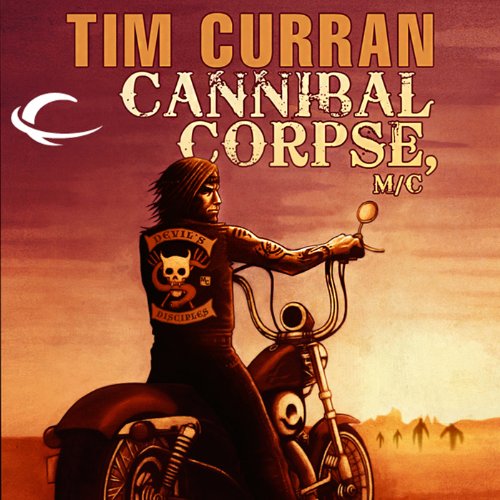 Cannibal Corpse, M/C, is a bloody, post-apocalyptic biker tale about flesh eating undead monster mutants, made by nuclear radiation of atomic blasts, who have taken over the scorched country and turned it into a lawless wasteland.

It is up to one hardcore outlaw, biker John Slaughter, to ride his dirty, powerful hog across the poisonous and dangerous hell zone of The Deadlands, rescue a crucial biologist from captivity, and try and save the nation from utter devastation.

Narrator Steve Coulter performs this wild and fun story in a cool, detached, and hip style. Not your average zombie adventure.

Following a major pandemic, the country is in ruins.West of the Mississippi River is a hellzone known as the Deadlands. Here, bioengineered Corpse Worms rain from the blood-streaked sky, reanimating the dead. And here, atomic weapons have created legions of mutants, primeval monsters, and wild chaotic weather patterns.

Enter John Slaughter. Hardcore outlaw biker, blood member of the Devil's Disciples, and a very wanted man. Captured by the Army, the feds want him to lead a gang of his old bikers across the Mississippi and into nuclear wastes of the Deadlands.

His objective: snatch a high-level biologist who is being held at an old NORAD fortress by the paramilitary terrorist group, the Red Hand of Freedom. It will mean a raid into territory swarming with the living dead, mutations, and sects of psychotic survivalists... not to mention the Cannibal Corpse motorcycle club, blood enemies of the Devil’s Disciples, whether living or undead.

His incentive: his brother is being held at a federal prison back East on charges of sedition. If Slaughter does not bring back the biologist, his brother will be executed.

But there’s one thing Slaughter doesn’t know. An ancient, diabolic evil has claimed the Deadlands and is in league with Cannibal Corpse. And unless he can stop it, it will pick its teeth with the last bones of the human race.

I would recommend this to any zombie fan. It was a new twist on zombies. The narrator and the story are a great fit.

It's a really graphic book. The type that makes you cringe at what is being read.

Have you listened to any of Steve Coulter’s other performances before? How does this one compare?

I haven't but I'll be watching for him.

Not worth your time

Cannibal corpse was a disappointment for me. It begins with a fantastic fighting scene and continues with an exciting description of motorcycle club member life in a post-apocalyptic world full of zombies. However deeper you go into the book more annoying it becomes. Final road trip in zombie driven wasteland with ideas slightly stolen from somewhere else (The Stand) is final nail the coffin. The narration of the audible audiobook is excellent, but it is not worth a steady decline in quality and atmosphere as the book progresses.