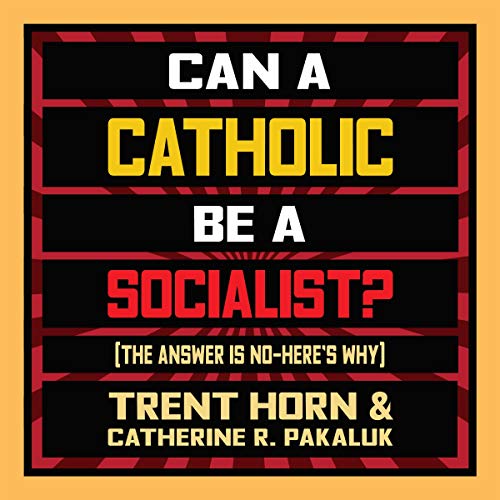 Can a Catholic Be a Socialist?

Somehow, this long-discredited economic philosophy is making a comeback, not only on college campuses and political talk shows, but among sincere Catholics. Some think that it could be the answer to greed and globalism. Others even argue that it’s the best way to obey Christ’s command to help the poor. Let’s give socialism a fresh chance, they say. A democratic socialism, this time, friendly to religion and ordered to the common good like the church says the economy should be.

In Can a Catholic Be a Socialist?, Trent Horn and Catherine R. Pakaluk refute this tempting but false notion. Drawing on scripture, history, Catholic social teaching, and basic economic reality, they show - beyond a doubt - that Catholicism and socialism are utterly incompatible.

Along the way, they debunk many of the common claims used to keep afloat the fantasy of a Christian-socialist hybrid, including:

Although there is no one “Catholic” economic system, Can a Catholic Be a Socialist? also helps you understand commonsense economic principles that are truly in line with the faith. For, we all should work for an economy that gives life: fostering prosperity and the common good while providing opportunities to practice temperance and charity.

Praise for the book:

What listeners say about Can a Catholic Be a Socialist?

This is so helpful. It clearly shows the inherent problems with all forms of socialism and debunks the myths that make socialism sound attractive.

Ok, but could have been better, too scholarly.

Learn what charity is and be charitable. That’s the Golden Rule. You’ll have a lot better chance to do that in a capitalist country than a socialist country. A Catholic would better better off not having anything to do with socialism. And remember: -no form of earthly government is flawless -a government’s role should not be to impose on the people it governs demands to be charitable -this world is not our own That probably suffices. Good luck!

If you are a Catholic who knows nothing about socialism and capitalism this book is for you!! If you are a Catholic who believes that socialism is in accordance with Catholicism then this book is for you. Trent goes over the history , philosophy and criticisms of both capitalism and socialism and their principles in accordance with the Catholic faith. I learned a lot and I plan on listening again. Also If you have family Catholic or not who are pushing socialism this is a must read.

Thank you Trent Horn and Catherine R. Pakaluk. socialism is a topic that is frequently discussed, yet seldom understood. This book helped me to understand socialism properly for the first time and it gave me the reasons for why it is so wrong!