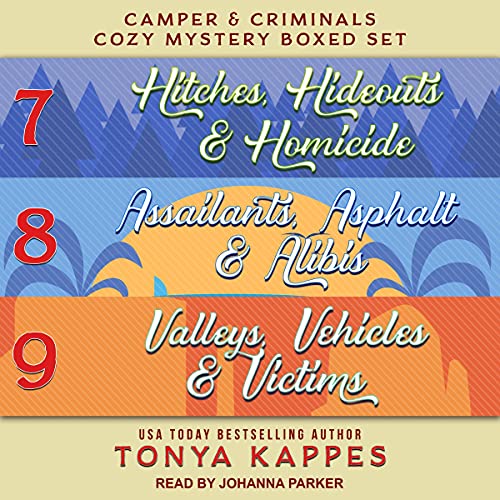 Hitches, Hideouts & Homicide: Everyone in Normal is excited for the Hoe Down to celebrate the opening of the new Old Train Station motel grand opening. Mae West finds herself in a dangerous situation when she finds a treasure map that leads to more than just treasure...a dead body!

Assailants, Asphalt & Alibis: This year the treasure hunters have descended upon Normal and staying in Happy Trails Campground. Once again, Mae and the Laundry Club ladies, along with Mary Elizabeth, find themselves doing things they never thought they'd never do. Go on a treasure hunt! Telling stories around a campfire about the curse of the John Swift Silver Mine is a fun story...until one of the treasure hunters is found dead.... Was it the curse, or was it murder?

Valleys, Vehicles & Victims: When a wedding party shows up at Happy Trails Campground, Mae West is thrilled. Gert Hobson has decided there's no way she's going to help out with Tom Moon's daughter's wedding since she claims Tom Moon STOLE her coffee blend recipe known today as the special Moonbucks blend. A public fight between Gert and Tom leaves Gert a prime suspect after a member of the wedding party is found dead at the wedding venue. There might not be a happily-ever-after for the bride to be or Gert Hobson if Mae West and the Laundry Club ladies don't solve the murder.

I LOVE MAE AND HER LAUNDROMAT GANG, NOT TO MENTION HANK. THESE BOOKS HAVE ME LAUGHING AND WORKING TO FIGURE OUT WHODUNNIT ALONG WITH MAE. I DO WISH HANK WOULD JUST GET ON BOARD WITH MAE'S SLEUTHING AND KEEP THEIR RELATIONSHIP ON TRACK. HOPEFULLY, HE WON'T DO ANYTHING STUPID. ON TO BOOK 10.