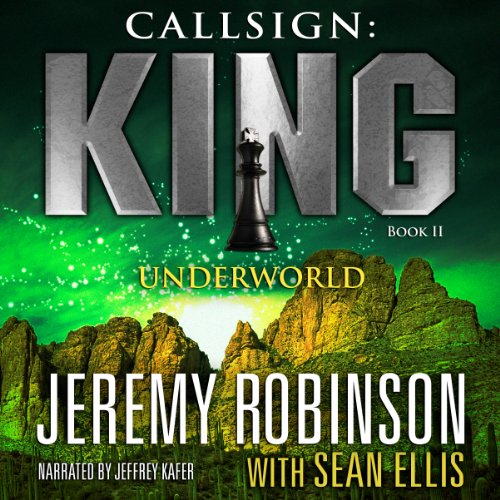 Strange things have always happened in the Superstition Mountains of Arizona...Bizarre lights, reports of cave entrances that appear and then vanish, hundreds of mysterious disappearances...and rumors of monstrous creatures that inhabit a labyrinthine underworld.

When a terrifying accident on an Arizona highway leads to a military exclusion zone and a cover-up of staggering proportions, Jack Sigler-Callsign: King, field leader of the elite and ultra-secret covert Chess Team-joined by his closest friend, archaeologist George Pierce, sets out into the desert, intent on discovering the truth.

Assisted by a beautiful paranormal investigator, dogged by soldiers intent on preserving the quarantine, and pursued by a relentless legendary hitman, King soon finds himself in a race against time to prevent all out war with the creatures that inhabit the underworld.

A tease to whet my appetite for more Chess Team

Where does Callsign: King: Book 2, Underworld rank among all the audiobooks you’ve listened to so far?

Jeffrey Kafer will take you an a ride. I like listening to Jeffrey's narrations so much, that I have gone back to listen to his reads from books that I have already read.

Jeremy Robinson and Sean Ellis take you to the Superstitious Mountains in Arizona for non typical mayhem. KING teams up with his friend George Pearce for another page turner. Mysterious fog, human like killer creatures and an alternate energy source that may bring about the destruction of our atmosphere.

Have you listened to any of Jeffrey Kafer’s other performances before? How does this one compare?

I have become a huge fan of Jeffrey's work and the books he has voiced for my favorite authors including Jeremy Robinson and Sean Ellis. This one was as riveting as the last one and I will be listening to more.

If I had the time, I certainly would listen to the whole thing in one sitting.

Already on to listening to KING Book 3 Blackout :)

Would you consider the audio edition of Callsign: King: Book 2, Underworld to be better than the print version?

That's tough, but no, I think in this instance it has to be a tie. I have read the print version as well as listened to the audiobook and both were very difficult to put down.

What was one of the most memorable moments of Callsign: King: Book 2, Underworld?

I think the main thing I took from this book was the friendship aspect, that's what sticks in my mind the most.

A fun second addition to the King series. Filled with monsters, friendship, the underworld and the odds stacked against him, King is once again proving that the odds don't apply to him. Robinson & Ellis always delivers fast-paced, enjoyable fun. Once again Jeffrey Kafer brought to life the characters of this book in a way that boggles the mind, a total hat off moment to him.