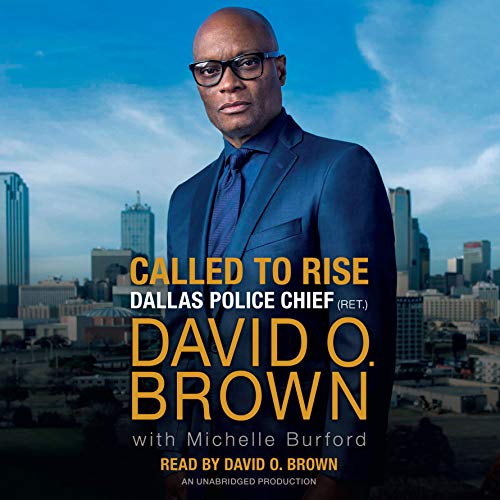 The Dallas police chief who inspired a nation with his response to the killing of five of his officers shares his personal story and his faith in America's potential to unite communities through a dedication to transparency and trust.

On July 7, 2016, protesters marched in the streets of Dallas to demonstrate against the killings of unarmed black men by the police. As the peaceful event drew to a close, a sniper opened fire, targeting white cops and killing five of them. Into this charged situation stepped Dallas police chief David O. Brown, who, with a historic new tactical approach, quickly ended the gunman's siege and calmed his community and the nation.

In this powerful memoir, Chief Brown takes us behind the scenes of that tragedy and shares intimate moments from his early life: his childhood, in which he was raised by a single mom in a neighborhood poor in resources but rich in love and faith; his college years - cut short when he felt called to save his hometown from its descent into drug-related violence; and, as he moved up the ranks, a series of deeply personal tragedies. His first partner on the job was killed in the line of duty, his younger brother was murdered by drug dealers, and during Brown's first month as chief of police, his mentally ill son was killed by a cop after taking two other lives.

Called to Rise charts how, over his 33-year career, Brown evolved from a "throw 'em in jail and let God sort 'em out" beat cop into a passionate advocate for community-oriented law enforcement, rising from crime scene investigator to SWAT team leader to the head of a municipal police department widely regarded as one of America's finest. Now retired, "America's chief" wants to bring his hard-earned knowledge of Dallas - emphasizing outreach, accountability, and inclusion - to help encourage unity in the nation's hurting communities.

Chief Brown believes that we have to band together to engage in the kind of dialogue that can lead to solutions. In place of complaining, we all have to take action - and one first great step is to tune in to what is being said. Called to Rise explores the keys to that dialogue - trust, transparency, and compassion - that have made Brown a leader on the front lines of social change in America.

What listeners say about Called to Rise

Unfortunately the message in this book was very church oriented which I didn't get from the description before purchase. It was hard to take anything much from it on that front.
I found the book quite basic.

I have been working on getting funding for a spiritually-based community for young adults with addiction and mental health issues. My experience comes from being in recovery from the family side for almost 30 years. my life experiences began because of my spouse. The life experiences of having a child with addiction and mental health issues have given me personal experiences to create my vision and mission of putting an end to this holocaust on our children. When the funding comes through I look forward to collaborating with David O Brown. I believe he is the Best example of a leader that America has had for a very long time. God bless you David O Brown and I look forward to being able to give you a hug in the very near future. Gratefully, Eryn Bennett

Inspirational Story and insight into US Policing. Everyone should listen or read this book, especially Police officers.

Chief David Brown provides a powerful account of his life with many lessons and words of wisdom that can be applied to today’s challenges. It’s especially a must read for rising law enforcement leaders.

As a former police officer in the Chicago Police Department, this man seems that he will be great for the city. The book was excellent and his life was above and beyond what a police officer should be. I applaud him for embracing the community policing program. I know it works, I took a foot post that I volunteered for, worked 12 years on a similar corner he described in the book-and received many community awards,one from the mayor Eugene Sawyer and one from Congressman Danny Davis. I was a white police officer in an all black neighborhood and earn the respect, so I know that the Chief is on the right track because it does work. I retired from the position, foot patrol. After the writing of this book I guess he was chosen by the mayor of the City of Chicago to be our next superintendent,
I would be proud to serve under a man like Chief David Brown. My son will have that opportunity on the job works the 15th Dist his son, my grandson a cadet also my godson, all good police officers in the 15th district where I retired from.....Good luck boss.

Excellent book, this material should be in the hands of every leader, up and coming leader and every wanna be leader!

an incredible story about the events in Dallas and the Chief's journey getting prepared for that day in July.

excellent man who is making a difference in our lives...very impressed with his life and his character

David Old Brown is a little stiff and stilted as a narrator. However his story is touching. He gives the listener a view into his mind. and that is the mind of a cop first. child of God second, African-American third.

What did you love best about Called to Rise?

Chief Brown's candor about the challenges of his life and work was enlightening. His faith and integrity in difficult circumstances were uplifting.

I truly enjoyed this book. Very inspirational and moving from beginning to end. Must Read.