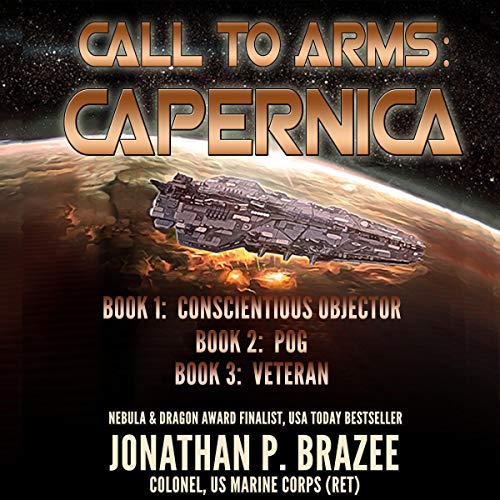 By: Jonathan Brazee
Narrated by: Terry F. Self

Far from the war zone, the Wolvics have launched a surprise attack while the confederation army and navy are engaged in other fronts, and it is up to those on the planet to hold off the invaders until the confederation forces can respond.

This trilogy contains three such stories of people responding to the call.

A young conscientious objector is conscripted into the provisional planetary militia. But how can he carry a rifle and still uphold his convictions?

As a religious refugee, Harris Taymon knows he owes a deep sense of loyalty to Capernica, but can he bear arms against the enemy with intent to kill?

And if he doesn’t, can he survive his own side where desertion and cowardice are punished by execution?

Brand-new boot Second Lieutenant Cel Wysoki is home on leave while awaiting logistics officer school, when Capernica is invaded. She has no unit yet and not a clue as to how the army functions.

More than that. She is a POG - a “person other than grunt”, a "desk-jockey-in-training”.

Link up with the local garrison 100 klicks away? Surrender and wait out the war? Hide out in the mountains and hope for the best?

The army doesn’t care that she has no training. They have one code: Soldiers always prosecute the war to the best of their abilities.

Does she even have the capability to attempt that?

Old soldiers are supposed to sit in the bar, drink with their buddies, and tell war stories. But when invaders invade, veterans do what they’ve got to do.

Master Sergeant Lester Arceneaux (Retired), a disabled vet, is long into his golden years, too old even to be conscripted into the planetary militia.

But when the enemy rolls over the local forces, he must run to the sound of gunfire if his wife and neighbors can have even a small chance to survive.

His heart and mind are willing, but are his old bones up to the task?

Bonus content: This trilogy contains previously unpublished bonus content that wraps up the events of the three included novellas.

What listeners say about Call to Arms: Capernica