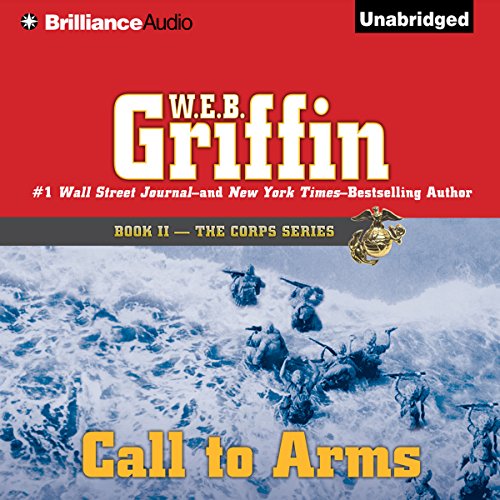 The attack on Pearl Harbor swept America into the raging heart of the war. The stormy South Pacific presented a daring new challenge, and the men of the Corps were ready to fight. An elite fraternity united by a glorious tradition of courage and honor, the Marine Raiders were bound to a triumphant destiny....

“For some of us, reading The Corps series is like eating popcorn at the movies: you can never eat just one kernel, and you can never get enough. Griffin captures the smell of the smoke of battle as vividly as if one were on the beach at Guadalcanal.” ( The Philadelphia Inquirer)
“This man has really done his homework.... I confess to impatiently awaiting the appearance of succeeding books in the series.” ( The Washington Post)

An epic story worthy of your time.

Like Semper Fi, this one leaves you longing for more. The characters are well developed and charismatic. The historical backdrop is accurate and Griffin does a masterful job using the reality of war to make the reader feel the impending doom of the lost of loved ones.

Once again Dick Hill is wonderful. Somehow, he is exceptional in the feminine voice.

Did I mention it left me wanting more? I've already purchased books 3 & 4 at the used book store!

The USMC Goes to War against Japan, and Itself

One of the things that stands out in my mind about Griffin's writing, and The Corps in particular, is how he writes about the institution as a sum of its parts, made greater or lesser by the situation and how those parts interact. I did not read this installment until it made its way onto Audible, due to an inability to find it sooner. But nowhere else is the above assertion more clearly seen than in this account about how the USMC struggled to cope with the shock of Pearl Harbor and the need to hit back.

From the moment war is declared, Griffin's characters are witness to the efforts of the marines to prepare for the impending Pacific War. Pilots are being rushed through training; new units are being assembled; and perhaps most dramatic, new ways of fighting are being proposed. And here, the centerpiece of the novel, the marines' internal conflict over the Marine Raiders, as both a viable combat doctrine and a serious political threat to the existence of a postwar corps comes to light.

Occurring as it does at a time and in places where action is light, this book for the most part is an establishing point for the cast that the reader will follow through the series, in marine aviation and the shadowy world of the corps's own covert operations. There is much space given over to the personal lives of the characters and their own personal conflicts, ranging from a pilot's infatuation with another pilot's widow, to a marine officer's dealing with an inexplicable loss of sight, to an intelligence officer's misgivings at being instructed to spy on a superior. The raiders' trial by fire is almost a postscript to the individual dramas that lead up to it.

It's quite an engaging war story, considering how little shooting actually goes on. It's a story as the name suggests, about the corps, told in the often irreverent, humorous, occasionally dark, sort of way, that evokes the tone of the sort of larger than life tale you could expect to be told you by someone spinning it as they go. This impression is helped greatly by Dick Hill's narration; one could easily imagine him, telling the individual tales as though they were his own, or recounted from someone who was there, with a "so there I/he/she was..." grandeur, and maybe a wink.

It is well worth a listen if you're familar with the series, but have either not read its beginnings or have forgotten and contemplate a reacquaintance. If you're new to the series, it is worth starting with Semper Fi, especially given the rather modest member pricing. I can't wait for the third book's release.

Great story about US MArines in WW II

No one does military novels as well as W. E. B. Griffin. This one is set early in US involvement in WW II. As narrator Dick Hill is one of the best and in Call to Arms he is at his best.

Outstanding continuation of the Corps series.

Having read the Corps series 25 years ago I can say that the story seems even more fresh today. This book helps flesh out the characters we met in Book 1 : Semper Fi. For those who enjoy historical military novels, or just rousing tales in general, listen to this series.
I hope Audible soon has the rest of the Series available!

Griffin captures the feel of the Marines circa WW11.

If you could take any character from Call to Arms out to dinner, who would it be and why?

SGT. Ernie Zimmerman. He is not the primary focus to be sure, but he gives you a feel for how a Marine would handle things.

The second installment of the Corps series--2Lts McCoy and Pickering after attack on Pearl Harbor. McCoy goes to DC and is assigned as a spy against renegade LtCol who created the Raiders; the precursor to today's Marine Corps Special Operations. Pickering plops at Pensacola for flight training, becomes a fighter pilot and falls in love with the unattainable woman. Other characters just keep coming back to life. The characters are strong in their relationships, especially among the raiders. Griffin's research is excellent. This book carries the story along and along and along. It answered several questions from book #1 and sets the stage for books 3-10.

Excellent Series, but where's the rest?

What did you love best about Call to Arms?

It is just an excellent book and series. It has given me much more appreciation for what the military does to keep us safe. The book moves along quickly with a great plot and always keeps you wanting more. A lot of authors seem to get last towards the end if a story and don't do a very good job of creating closure. W.E.B. Griffin on the other hand, does an excellent job of finishing what he starts.

I really like Pic Pickering (not sure of the spelling) as an aviator myself, it has been very interesting following his path to aviation.

It would be very nice to see the series continued. It seems to be well liked and popular. I for one would like to get the rest of the series.

THAT YOU TRUST ME AND LOVE ME
I listened to book one and wrote a glowing review on it. I bought this book, because I liked book one. At the half way point, we still had not gotten into the war. Seven hours of a military book and no action. Instead the book was a love story. Some of it taken directly out of book one, but in book one where it was a side story, here along with another love story, it takes center stage. I wanted to learn about the war, instead I was told that marines are attracted to sluts and attract sluts.

FOR SOME REASON YOU BRING OUT THE BITCH IN ME.
I mentioned in book one that I found it odd that a boy from Pennsylvania, from a poor home, where he was abused and who went no future then high school would speak Chinese. I also mentioned that the Chinese speak many languages with two main languages and the Chinese often have trouble understanding each other. Someone must have pointed this out to Griffin, cause in this book he says the boy speaks two Chinese languages. This seems even more improbable to me. In this book the second main character is a born pilot. In the past he had no interest in planes at all. We are even told that this happens maybe one in one hundred thousand recruits. The instructor had never seen it until our hero shows up. I have two more Griffin books in my library, I sure hope they are as good as book one of this series and that they are believable and not Chick Lit.

Twenty One Chapters Too Long

Before buying this book I read a review that the book leaves you wanting more, the writer of this review gave this book a positive rating. I also wanted more, a lot more in fact. In the twenty one chapters there was very, very little about action in the Pacific. I am hard pressed to describe what the book was about. It had two main characters,the wealthy one went to flight school and fell in love with a war widow. The poor one went to the Rangers and fell in love with a rich girl. That's about it. This was my first book by the author and my last. Dick Hill did his usual great job of narration but narration alone can't save a story.

Good book over all, but not enough about the war. A series about the Marine Corps, should have a little about the battles fought and a little less about their love lives.

I must admit, I am a bit shocked at the lack of attention to detail of this book! A minor issue but still a flaw. How could Pick Pickering arrive in a 1941 car when he was still in, or just out of college?

It's a compelling read and part of a great series. It mixes fictional characters with the history of the Marine Corps during WWII. Recommended for anyone into military history or even those just looking for a good read.