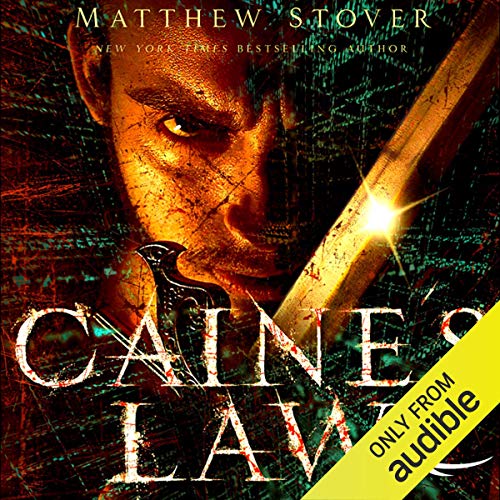 Some laws you break. Some break you. And then there's Caine's Law.

From the moment Caine first appeared in the pages of Heroes Die, two things were clear. First, that Matthew Stover was one of the most gifted fantasy writers of his generation. And second, that Caine was a hero whose peers go by such names as Conan and Elric. Like them, Caine was something new: a civilized man who embraced savagery, an actor whose life was a lie, a force of destruction so potent that even gods thought twice about crossing him. Now Stover brings back his greatest creation for his most stunning performance yet.

Caine is washed up and hung out to dry, a crippled husk kept isolated and restrained by the studio that exploited him. Now they have dragged him back for one last deal. But Caine has other plans. Those plans take him back to Overworld, the alternate reality where gods are real and magic is the ultimate weapon. There, in a violent odyssey through time and space, Caine will face the demons of his past, find true love, and just possibly destroy the universe. Hey, it’s a crappy job, but somebody’s got to do it.

What listeners say about Caine’s Law

The pinnacle of Caine

Would you consider the audio edition of Caine’s Law to be better than the print version?

Not really, but Rudniki does phenomenal

What other book might you compare Caine’s Law to and why?

Caine's Law is so much unlike anything I've ever read, even Stover's other stuff.

Have you listened to any of Stefan Rudnicki’s other performances before? How does this one compare?

Oh yes. There wasn't many pages where I didn't go "HOLY COW!" but Caine's speech to the BOG is really good. Also, the Mockingbird question.

Did you listen to Hero's Die? Blade of Tyshaelle? Perhaps Caine Black Knife? Well you better do that before listening to this one. Caine is back and he is crafting a new future by rewriting the past, his past and the past of the universe... both of them. Harsh, gritty, profound and violent. Fans of Stover will not be disappointed.

great series!!! Caine is the ultimate character. I couldn't stop listening to this series. I definitely recommend checking this series out

I've listened to all of the Caine books and really enjoyed them. This one proves Stover's imagination is far from tapped out. The guy keeps taking things to new and interesting levels. I guess that's what makes great authors truly great, which he is. I'm not sure if it's because I read this one most recently, but it definitely struck me as more philosophical and dialogue heavy than the first, but it's all so great that I mention it as a positive. Still more than enough action, which is an f-ing ton. It's just a little smarter than before. The other good thing to know is that it lacks some of the depressive coloring of the last book. It still contains a great spectrum of emotion, but this book is more like the first two in its level of kickass.

My least favorite of the series

So this entry in the series gets very, for lack of a better word, timey-wimey. I still enjoyed it, but to be frank, this book is sort of a confusing mess. Characters constantly jumping back and forward in multiple timelines… meh. Bad story telling. Other than wanting to finish the series out I would have put this one down at multiple points. Tbh, if I could go back I’d listen to the first book, which I loved, and then quit.

If you are looking for a simple quick read, this is not the book for you. The book is amazing, the characters are wonderful, but you will need to keep up. This book will certainly engage your mind

Confusing but the last hour is worth it

This book was a decent ending to the series but it was more confusing than Blade of Tyshelle. I was completely confused about what exactly was going on. I was hoping for more scenes with kid’s playing characters in the fantasy world and maybe more action sequences. There was just so much time hopping and stuff set up in the background that I never really understood what was going on.

Although I wasn’t quite sure how they got there I did enjoy the last hour or so of this book. I thought the ending was really the best part and before this sequence I was probably only going to give the book two stars. I also liked how there were some characters as confused as I was wondering how the heck all of this actually happened.

Overall this was a decent series. I really preferred the straightforwardness of the first and third books but they both seemed to be just setups for the second and fourth books. I prefer books where I don’t have to wrack my brain to figure out what’s going on but if you really like to think about a story and enjoy the confusion and chaos some books create you’ll probably enjoy this series more than I did.

Stefan Rudnicki did a great job throughout the entire series and kept the voices and pronunciations the same throughout all the books. I’d definitely listen to other books where he is the narrator.

Wow, enjoyable and frustrating but good

Stover goes off the rails with his final book of the Caine series, at times confusing, at times fantastic, so I loved the series, I loved the MC, but I warn you, parts of this book are insane and if you plod thru, you will enjoy, but when it was all said and done I enjoyed it, despite the insanity.

As good as the first one

Caine is back in action. Combining "memories" of his brutal career start with no less brutal current adventure, he spins so great a yarn you'll never notice the passage of time. And when you get to an -- admittedly cliffhanger-y -- ending, you won't mind, you'll yearn for more.

What an ending. This must be read/listened to immediately after book 3. Thanks for the story.