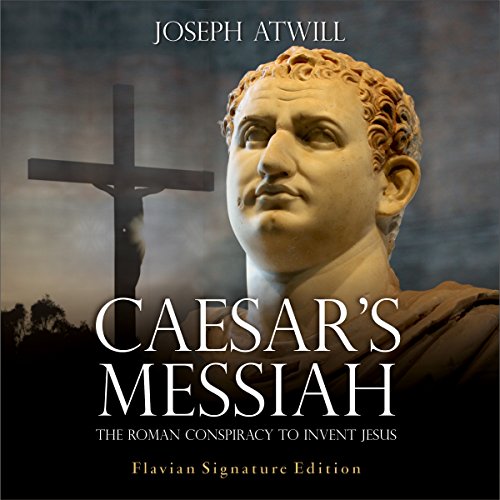 Was Jesus the invention of a Roman emperor? The author of this ground-breaking book believes he was. Caesar's Messiah reveals the key to a new and revolutionary understanding of the origin of Christianity, explaining what is the New Testament, who is the real Jesus, and how Christ's second coming already occurred.

The clues leading to these startling conclusions are found in the writings of the first-century historian Flavius Josephus, whose Wars of the Jews is one of the only historical chronicles of this period. Closely comparing the work of Josephus with the New Testament Gospels, Caesar's Messiah demonstrates that the Romans directed the writing of both. Their purpose: to offer a vision of a "peaceful Messiah" who would serve as an alternative to the revolutionary leaders who were rocking first-century Israel and threatening Rome.

Similarly, Caesar's Messiah will rock our understanding of Christian history as it reveals that Jesus was a fictional character portrayed in four Gospels written not by Christians but Romans. This Flavian Signature edition adds Atwill's latest discoveries of numerous parallel events in sequence which ultimately reveal the identity of the true authors of the Gospels.

What listeners say about Caesar's Messiah

As Biblical scholar Bart Ehrman put it in his aptly titled blog post on the (then pending) release of Caesar’s Messiah: “More Conspiracy Nonsense”.

What struck me most at the conclusion of this book was not the compelling nature of Atwill’s arguments, but the absence of them.

Atwill’s “argument” is based on a mixture of coincidence and reading meaning into Biblical passages to uncover hidden “meanings” and “logic puzzles”. In other words, the same sort of mental gymnastics conspiracy theorist engage in.

Atwill’s argument is further undermined by a failure to acknowledge the well-established editorial work the Bible has undergone since its various components were written. These issues are then compounded with what can only be descried as a flawed understanding of probability.

All in all, I consider the book an imaginative work of fiction. Best to avoid if you’re looking for serious Biblical scholarship, but you might find it entertaining if you enjoy pulling apart conspiracy theories.

The narrator, who does an excellent job, is to be commended for seeing the project through.

A bold challenge to the core of Christianity

Have you listened to any of John Alan Martinson Jr.’s other performances before? How does this one compare?

This is the first time i have listened to John Alan Martinson Jr.'s narration. His delivery is deliberate and measured. The deep and authoritative tone of his voice and the subtle inflection he employs endeared me as the listener, taking me deeper into the content of the book. These quality's helped me immensely as i am by no means an expert on the topic.

This was a highly compelling read, filled with theories and ideas that make a lot of sense.
I found it an informative and exciting work.

How come no one else realize this?

So the thing that I'm wondering is why no one else realized that Josephus, Titus Flavius and his cronies concocted the New Testament? Seriously, after you listen to the first two hours or so, a bunch of stuff will start to click, but its astonishing that no one else has noticed the blatant connections between Josephus' Wars of the Jews and the Gospels. After Joseph Atwill shows you how they're connected it's pretty impossible not to see this. As another reviewer said, the case is closed: Jesus Christ is a fraud, it's just a made up story. I still believe that something created this world (I think atheism is pretty stupid) but the New Testament is a joke...and it is literally a joke. Just get the audiobook. You'll realize that the Gospels are actually a black comedy. It's satire. It's making fun of anyone who actually believes it. Much applause to Joseph Atwill for noticing all this stuff and putting all the pieces together. Shame on everyone else for not realizing we've been had by the Romans and a small group of their Jewish co-conspirators. Great narrator by the way. It was really nice to listen to.

Christianity was created by Jews and Romans to control people? That wasn't hard to see coming a mile away.

I've been saying this for years, but the only difference now is Joseph Atwill's unbeatable evidence proving the fact.

Christianity makes people docile and willing to submit to their masters, no matter how corrupt and evil they are.

The lie of Christianity actually protects itself, because once a person becomes a Christian, their religion demands that they shutdown their mind and stop questioning.

I'd really like to see someone try to argue against Joseph's mountain of evidence.

Christianity is finished, thanks to Joseph Atwill, who has provided us the cure for the virus that turns people into unthinking "walking dead."

Have you listened to any of John Alan Martinson Jr.’s other performances before? How does this one compare?

John's vocals are rich and professional as always.

Pay no Attention to the Man Behind the Curtain

I cannot imagine how it's possible that Christianity has survived Joseph Atwill's book, but I sense it's because a lot of religious folks are in a perpetual state of denial. It's not really about facts for them, as much as it's about how their imaginary friend makes them feel.

My Favorite Book So Far

Love this book. I'm a non believer who has respect for Christianity in general. Reading this really cemented a lot suspicions regarding the creation of Christianity and it really illuminates what will feel like "the obvious" after you've read this book. 3 thumbs up.

Nobody found it odd that Jesus didn't have anything to say against slavery? I would think that would be one of the first clues that the religion is a fraud designed to pacify people...or perhaps the part about the dead coming up out of their graves and walking around town (Matthew 27:52). Funny that's there's no record of any such event ever taking place. In fact, there's no record of Jesus Christ ever existing, nor any of his apostles, but that hasn't stopped Christians from believing in the story. Which begs the question: now that Joseph Atwill has proven beyond any possible shadow of a doubt that Jesus Christ is just a character that the Romans invented, are Christians going to wake up? I really don't think that's likely, but for what it's worth, I hope Mr. Atwill's work does help the world wake up from this mind-numbing religion.

I guess the real joke is that Christians have been murdering and persecuting &quot;pagans&quot; and &quot;heathens&quot; for centuries...and all along their beloved Jesus Christ was no more real than Mickey Mouse or Scooby-Doo.

imagine that this is even possible?

like finding life on other world's. people don't care if they've been lied to, they'll still go with what they've been told. I want more proof because this does sound good.

This book is a bit tedious for lay audiences, but its terrifying thesis is well-argued. I didn't love the narrator's choice to give Josephus a cartoonish, swashbuckling voice, but it did make it easier to identify when Josephus was being quoted.

Sorry but this evidence doesn’t seem concrete. The author is a huge conspiracy theorist on subjects other than Christianity, which makes me hesitant to believe him. Book was too long and all “theory,” or “parallels,” no smoking gun evidence.

The most important book in the 21st Century

The most important book in the 21st Century. Atwill is clearly a genius. I binge-listened for three days, and I will do it again soon, as there is so much important information here. A stunning book impeccably argued and defended.

Extraordinary ideas compellingly written. The delivery however grated on my ears and nerves. I bought the book on kindle and read it myself.