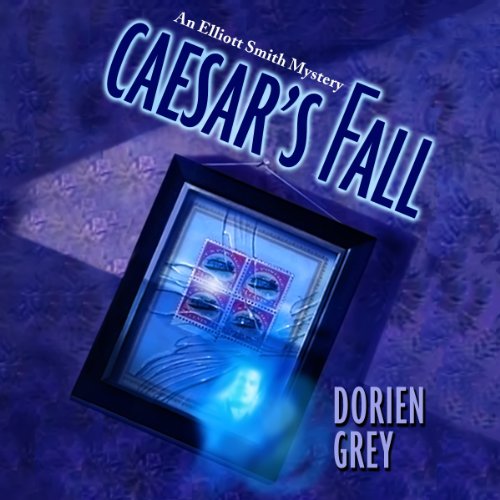 With a new building to restore and his relationship with Steve growing more serious, the last thing Elliott needs is someone else's problem, but when lottery millionaire Bruno Caesar moves into his building he can't just ignore the man's pleas for help.

Then Bruno's life comes to an abrupt end when he falls from his balcony. There's only one problem-he was terrified of heights…and never went onto the balcony.

Bruno can't rest until the puzzle of his sudden death is solved, and Elliott and John are once again searching for answers.

I do a fair amount of long distance driving and I've discovered the pleasure of listening to an audio-book while doing this and, when the audio-book is as good as this one, the drive goes too quickly.
I'm a long time fan of Dorien Grey and I have all of his books as paperbacks and hardcovers. I also have a lot of his books as e-books. They are books that I reread regularly.
The audio-book is well read and I found my engrossed while driving - even though I have read the book several times already. This is the third book in the Elliott Smith series and you do need to listen to or read the first two books in the series before tackling this one.
If you haven't read or listened to a Dorien Grey book before may I recommend that you do so - you won't be disappointed.

What made the experience of listening to Caesar's Fall the most enjoyable?

It’s been quite some time since I read the e-book version of this title, so much of what I heard in this audiobook seemed new.

The opening scene brought me right back into the lives of Elliott and his boyfriend Steve. Grey has always teased us by not revealing much about the physical appearance of his chief protagonists. However, thanks to the technology of audiobooks, we can at least hear how the author intends Elliott to sound. But I’m not totally convinced. We’re told Elliott is 39. Jim Hickey’s voice sounds older. This need not necessarily be a barrier to enjoyment, but it was something I had some trouble in adapting to.

Because Grey limits himself to a relatively small cast of regular characters, each different in his or her own way, it's easy to keep them all separated in one's head. Although this could have been made easier if Mr. Hickey had adopted different voices for each character. I realize, however, this is a deliberate choice and I offer no criticism, many fine narrators I’ve heard over the years do not dramatise their readings. One thing I can praise Mr. Hickey for is the use of voice-changing technology. Whenever Elliott is on the telephone to someone, the voice of the other party sounds like they’re actually speaking through a telephone. In my many years of audiobook listening I’ve never come across this technique but I’m definitely a fan of it.

This is a fairly long book, but the space is well used. Elliott gives us plenty of details about the apartment block he's renovating. Often too much description can bore, but Grey manages to keep things interesting by taking us through the process of acquiring then working on the building, bringing it back to its former glory. All this is interspersed with details of Steve and Elliott's growing closeness, and of course there's also a mystery unfolding as well.

The "Caesar" in the title is Bruno Caesar, a fellow resident in Elliott's building. Bruno won a lot of money on the lottery. Each time we saw someone hanging around Bruno I couldn't help but feel they were gold diggers. And to be fair, Bruno eventually thought most of them were, too. Rudy, a pretty disreputable character himself, summed the others up rather well. "What would a sexy little hustler like Ricky really see in a 40-something chunk of total vanilla like Bruno, other than dollar signs? His financial manager was robbing him blind, and that Blanton character might as well have 'Con Artist' stamped across his forehead." But Bruno was lonely, so he sadly concluded he had to buy friendship. Yes, I felt sorry for him.

The "Fall" in the title intrigued me. We were told early on Bruno had a great fear of heights, never going out on his balcony. So every time we saw him near a balcony or a roof edge I thought, "This is when he'll fall." I'm convinced this is one of the many ways Grey plays with the reader, dangling (not literally) Bruno over the edge and asking, "Shall I drop him?" His eventual fall came as a bit of a surprise as it happened unexpectedly.

Another of the regular cast of characters is the non-corporeal John. Like Elliott, I often found John's contributions frustrating, adding to, rather than helping to solve, the mystery. This of course is all part of Grey's cunning plan. I know little of the afterlife and spirits, but I think John is portrayed just right. And here again Mr. Hickey reaches into his box of tricks and gives John a reverberating voice which certainly helped us picture John as other-worldly. A number of times John tells Elliott that being dead doesn't make him omniscient. We're given frequent, maddeningly tantalising clues ~ as well as recurring wafts of Old Spice ~ but rarely anything concrete. This is an excellent way to incorporate the supernatural into an otherwise traditional mystery crime novel.

The ending came quickly, and some may think it left certain elements unresolved. As a long-term fan of Dorien Grey's work, I've come to accept such endings. The main mystery is solved so the story ends, but life goes on.

John. He's not all-knowing, which makes him a frustration but also very real.

Afraid not. Prefer to be talked to rather than read to.

Too long for that. Need to eat, sleep etc.

The story premise is good and the characters are likeable. The narration was good though not to my taste.