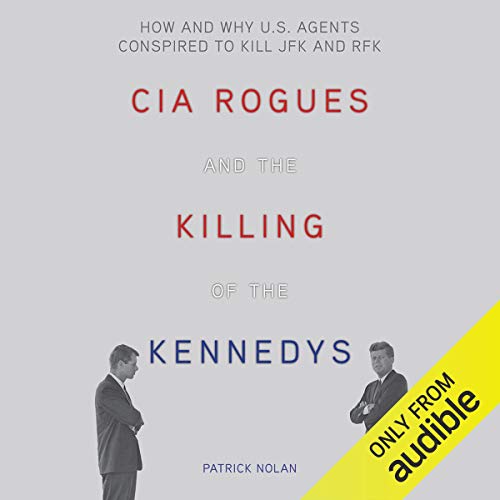 CIA Rogues and the Killing of the Kennedys

Fifty years have passed since the assassination of John F. Kennedy, but the details of what happened on that fateful day are still highly debated. Here is Patrick Nolan's welcome addition to that debate, gathering the research of many forensic scientists and investigations to paint a vivid picture of the assassination of JFK as well as his brother, Senator Robert F. Kennedy. The argument presented is fascinating and points directly and unapologetically at the CIA. Stephen Bowlby gives a balanced narration of this work, going between a stark journalistic tone and forceful emphasis on the hard-hitting information.

The US Central Intelligence Agency is no stranger to conspiracy and allegations of corruption. Across the globe, violent coups have been orchestrated, high-profile targets kidnapped, and world leaders dispatched at the hands of CIA agents. During the 1960's, on domestic soil, the methods used to protect their interests and themselves, at the expense of the American people, were no less ruthless.

In CIA Rogues and the Killing of the Kennedys, Patrick Nolan fearlessly investigates the CIA’s involvement in the assassinations of President John F. Kennedy and Senator Robert F. Kennedy - why the brothers needed to die and how rogue intelligence agents orchestrated history’s most infamous conspiracy.

Nolan furthers the research of leading forensic scientists, historians, and scholars who agree that there remain serious unanswered questions regarding the assassinations of John F. Kennedy, fifty years ago, and Robert F. Kennedy in 1968. He revisits and refutes what is currently known about Lee Harvey Oswald and Sirhan Bishara Sirhan, and offers listeners a compelling profile of the CIA’s Richard Helms, an amoral master of clandestine operations with a chip on his shoulder.

Bolstered by a foreword by Dr. Henry C. Lee, one of the world’s foremost forensic authorities, CIA Rogues and the Killing of the Kennedys is an unmatched effort in forensic research and detective work. As the 50th anniversary of the JFK assassination approaches, Nolan has made a significant contribution to the literature on that fateful day in Dallas, as well as shed light on that dark night at the Ambassador Hotel. Listeners interested in conspiracy, the Kennedy family, or American history will find this audiobook invaluable.

Where are we now?

The evidence in this book is well put together and compelling. I was not one to believe the jfk/rfk conspiracy but after hearing this audio book I have found that there are not just "theories" out there but hard evidence of a US govt coup. Great book, sobering and a bit frightening. The only thing missing from this book is an idea of what this group of rogues has been up to since the 60's? How far does it go? 1984 in real life? It would appear that is where we are.

We deny and avoid that which causes us mental anguish.

Patrick Nolan lays out an argument that I probably would have thought was a Hollywood script. But in my case, Nolan’s work rings clear. I have a friend, Bill, who had volunteered to be one of the paid subjects of a Harvard psychology department research study in the 1960s which turned out to be part of a program to define how assassins can be identified by personality type. Bill was slipped LSD without his knowledge. The flash backs he describes are terrifying. After retiring from the military Bill volunteered to help “bring back” hit teams that killed men, women, and children associated with insurgent groups threatening governments around the world. “Bring back” means our assassins, working in teams, could not always handle their assignments well. “Suicide” might take place before the team was extricated. But a “suicide” might be the necessity of the team killing one of their own in the event an assassin places himself between his team members and a child he cannot bring himself to kill. So yes, Nolan’s book is not fiction. World War II was the breeding ground for most of this dark history and the programs that go on to this day.

The author seems to glide easily between facts and assumptions, and does not source some of the statements of fact he makes. It seems odd that he will list certain facts then state that this meant... something that is not a fact or that cannot be sourced. The one thing that strikes me as odd is the fact the while the author asserts that there are several "uncanny" characteristics between Oswald, Ray and Sirhan, I don't see it. Lee Oswald was an intelligent, motivated married man who had held several important positions in the U.S. Marines and the CIA. He knew Russian and worked with military secrets... he was trusted to work with the CIA and was used as a false defector to the USSR. The other two, Sirhan and Ray, were single, simple and rather average men of no real importance. Oswald was nothing like these other two men. Why would the CIA use Oswald as a plant when he was so closely connected to the CIA? The JFK assassination was the first the alleged triple conspiracy killings. Why use someone that could be tied so close to the CIA if something had gone wrong. Ray and Sirhan were definitely far easier to cast as a "lone gunman", but not Oswald. He was highly skilled, and if the CIA would really chose to sacrifice a skilled employee then what does that say, or should say, to the many people that want to serve their nation in clandestine service? Why not use some wannabe from outside the CIA and set him up?

Presents compelling evidence about discrepancies between the known personalities and motives of LHO and SBS and what was later claimed about them by the official assassination accounts, but this author’s theory is heavily dependent on the CIA’s secret MK Ultra program to explain the events. If you find it far fetched that hypnosis control can explain the complicated series of events in both assassinations, this book is not very convincing. The author also loses credibility in the final chapter by presenting the case of an amateur photographer who claimed to have been in the pantry at the Ambassador Hotel during the assassination of RFK and claimed that his photos of the events were confiscated by law enforcement and never returned. This man, Scott Enyart, has since been thoroughly discredited and there’s no evidence that he actually witnessed let alone photographed RFK’s assassination. The author fails to mention the problems with Enyart’s story and this leaves me wondering what other one-aided anecdotes he misrepresented elsewhere in his text.

The subject & detail offered in this book was concise and well written. The hardest part was listening to the narrator read it. At times, he sounded like the millionaire on Gilligan's Island... Good book otherwise.

I recommend this Book. It gives another view of what happened back in the 60s with the Kennedy family. This one makes you really think about our government and what is possible in today’s world.

Where is the editor?

This book is chock full of great information and detail. However, I thought I might go mad if I had to hear “as we shall see ahead”. The stories were told out of order and therefore, repeated entire sentences, sometimes 3 or 4 times. Could have used a good editor

Super in depth & interesting.. I am convinced our government failed its people & leaders all those years ago. How different the world would be if the Kennedy brothers were to have gotten their way.

The information provided here is utterly fascinating and extremely interesting. The only drawback in listening to the audiobook is the narrator. His patrician accent, whereby every vowel at the end of a sentence or statement feels like it’s being vacuumed of the air he needs to be pronounce it, is very, very distracting.

An in dept look into the greatest turning points in USA political history.
What would the world be today if these 3 great men had lived on, and this profound evil had failed?