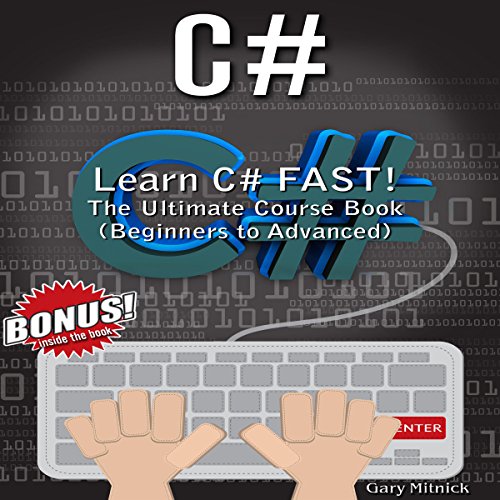 There is in fact a whole host of reasons to learn how to code. Computers have always made things easier and performed difficult tasks quicker than humans could ever do. With artificial intelligence and machine learning, a lot of jobs done today by hand will in the future be automated and performed by robots. However, programming is safe from automation, and there will be a continued increased demand for coders.

So why learn the C# programming language? One of the main reasons you should learn C# is that it is beginner friendly and was designed to be simple and easy to use. What you read in a C# program is somewhat similar to what you read in the English language. C# takes away most of the complex detail at the machine level so you can focus on programming instead of having to focus on complicated details.

Another main reason to learn the C# programming language, which is backed by Microsoft, is the toolsets and framework available to you, including Visual Studio, the graphical development environment that you can use to write your code. It is widely considered as one of the most feature rich, powerful development environments on the market. It is open source and offers a free license. The .NET framework provides you with hundreds of pre-built libraries you can use to build websites, work with file systems, implement security, etc.

C# is one of the most popular programming languages and closely resembles Java. Popularity is an important consideration for programmers, because it usually dictates how many resources are available online for the language.

C# is a very flexible language. The range of applications you can develop with C#, .NET and Visual Studio is almost limitless. You can develop native Windows applications, REST API, mobile applications, ASP.NET websites, Unity games, or even cross platform Xamarin apps that will work on both iOS and Android. You can do this with other programming languages, but not without a series of third-party tools to make everything work, whereas a C# developer will have a very cohesive, well-supported environment. Should you take up a full-time role as a C# developer, you can expect an average salary in the range of 55k to 121k in US dollars. C# has a very positive future.

Well built in regards to content but not going to be enough when you want to build a C# application, I would recommend this if you don't actually have a project but are interested in programming theory as it would cover most of the basic things you could think of. would need to read another book on winforms,wpf and uwp to really get started.