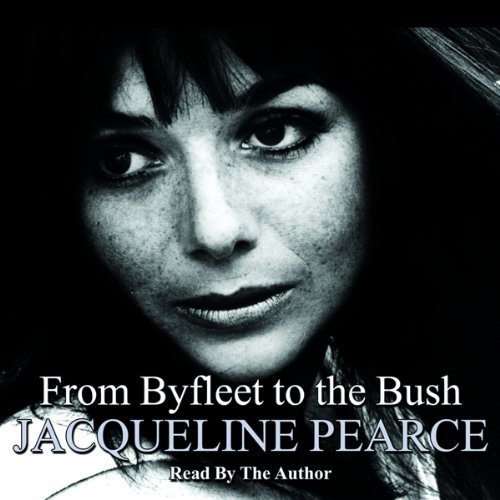 Byfleet to the Bush

Byfleet to the Bush

The actress Jacqueline Pearce is best known to television audiences as the villainous Servalan from the fondly remembered Blake’s Seven (BBC, 1978-1981). But her career has taken her from RADA to Hollywood, via starring roles in international comedy films, Hammer Horror, BBC Shakespeare, and London’s West End. So how did she end up living in the African bush with her belongings in black bin-bags? Find out with this gripping memoir of an extraordinary life - from Byfleet to the Bush.

Jacqueline’s motherless upbringing in suburban Byfleet was unconventional and her education at the hands of nuns left her emotionally scarred. Through the course of her erratic career, she found love, laughter, heartache, breakdowns, fame, obscurity, and sex drugs and rock and roll. On the way, she encountered such stars as Elizabeth Taylor and Richard Burton, Sammy Davis Jr, Jerry Lewis, Alan Bates, John Hurt, Dervla Kirwan, and Rupert Penry-Jones. Candid, vivid, mordant and funny, this is an unusual and enchanting memoir.

What listeners say about Byfleet to the Bush

Jacqueline, we love and miss you. Thank you for sharing your story. Bless you from another animal lover.

this is a great book read by the author which i always consider a bonus She is very frank about her life and fhe failures and successes she has experienced both personally and professionally. i wanted to pick her up.and hold her... So worth listening to

I couldn't stop listening! What a fascinating life and I bet there was so much more unsaid. What a brave lady to speak up about mental health too. This is so fascinating it should be made into a film. I listened initially due to being a new Blake's 7 fan and whilst there is barely any mention of that it mattered not a jot! Do listen!