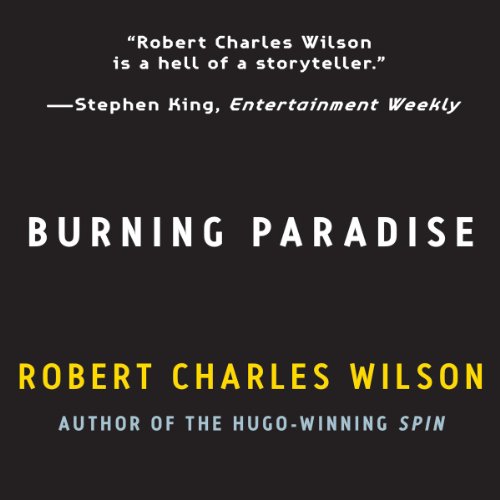 From Robert Charles Wilson, the author of the Hugo-winning Spin, comes Burning Paradise, a new tale of humans coming to grips with a universe of implacable strangeness. Cassie Klyne, 19 years old, lives in the United States in the year 2015 - but it's not our United States, and it's not our 2015. Cassies world has been at peace since the Great Armistice of 1918. There was no World War II, no Great Depression. Poverty is declining, prosperity is increasing everywhere; social instability is rare. But Cassie knows the world isn't what it seems. Her parents were part of a group who gradually discovered the awful truth: That for decades - back to the dawn of radio communications - human progress has been interfered with, made more peaceful and benign, by an extraterrestrial entity. That by interfering with our communications, this entity has tweaked history in massive and subtle ways. That humanity is, for purposes unknown, being farmed. Cassie's parents were killed for this knowledge, along with most of the other members of their group. Since then, the survivors have scattered and gone into hiding. Cassie and her younger brother Thomas now live with her aunt Nerissa, who shares these dangerous secrets. Others live nearby. For eight years they have attempted to lead unexceptional lives in order to escape detection. The tactic has worked. Until now. Because the killers are back. And they're not human.

What listeners say about Burning Paradise

Scott Brick is the perfect choice of narrator and the story enough to keep you listening and thinking wonderously.

Have you ever gotten your money back for a book you bought at Audible.com? They offer refunds. I have over 500 books in my library and I've asked for my money back once. This book, will be the second one. It was that bad.

Burning Paradise is a story about earth living in a cloud of silent aliens. The story, of course, is about the group of people who know about the aliens and are in covert battle with them.

The premise of this book was interesting and even the first half was ok. But it's like the author didn't know how to finish it, or got bored with his own characters, or was too enamored with the idea of this alien force so forgot to actually develop the characters of the humans--the ones who drove the story and the ones the reader (listener) is supposed to care about.

I didn't get to know or care anything about ANY of the human characters. The main heroine, Casey, was boring from the start and didn't do anything to become more interesting. The slightly "colorful" side characters didn't have any flair or interesting characteristics at all.

The ending, well, call it a spoiler alert if you like, but it just fizzles. I expected at least a big confrontation, something to make it worth my time that I stuck with it for 8 hours, but nothing happened. Oh my gosh it was bad.

Scott Brick, the narrator, I usually like, but Brick has a sardonic lilt to his voice that is perfect when the story has a smart-alecky lead character, or a little bit of humor. Also, Brick doesn't do women's voices at all, so he was a terrible fit for this book. This story took itself way to seriously for Brick to be reading it. I swear towards the end it sounded like Brick was bored stiff too.

If you want a semi-sci-fi or sci-fi-lite recommendation, listen to The Rook, or This Book is Full of Spiders, or Carrion Comfort. I don't recommend this book.

I'm not much for science fiction, but....

What did you love best about Burning Paradise?

This is a pretty good book- surprisingly believable and well laid out as to not give it all away at the beginning.

Very well thought out and surprisingly gripping- Weird comparison, but kind of like the movie Red Dawn, but without the Russians or bad acting

Took me about three days or so to finish the book- was very compelled to hear the whole thing.

What did you love best about Burning Paradise?

I'm a fan, so I loved everything about the story. I think Wilson has a fantastic imagination, and then weaves that into words.

Leo and Ethan. Mr. Wilson seems to have a difficult time with developing female characters.

Scott Brick is not one of my favorite narrators. His voice is a combination of Eeyore (very mournful) and William Shatner (dramatic pauses)
I compensate for this by kicking up the narration speed to 1.25.

Nice story twists. A world where the earth is invaded and under control of aliens. A good audiobook to listen too.

Only for Deep SFF or Robert Charles Wilson Readers

4.25 Overall:
Having been introduced to RCW's work (Spin) just in 2012, and loving it enough to finish the series, I have to say that Burning Paradise isn't for romance or action-genre buffs. However, if you really like sci-fi/fantasy--especially of the speculative variety, this should appeal to you. Wilson does seem to be peculiarly fascinated with self-replicating machines, and I truly cannot fault him for that; their Hypothetical (pun intended) existence IS fascinating.

The characters are well-written. The plot is great. The performance is spectacular, as always-Scott Brick's voice never detracts from the story. All in all, as a story, I enjoyed this audiobook immensely and will listen to it again.

So, because I never include spoilers, this concludes my review. Happy listening! ;)

I enjoyed this book very much. The presenter, Scott Brick, as always does a masterful job in capturing appropriate tone and rhythm of the story.
The story is an excellent display of RCW's masterful ability to write real human dialogue and reactions of characters in all sorts of situations.
The world envisioned is convincing and interesting throughout.
As always with RCW's books, don't expect definitive, satisfying endings.
But the journey is well worth the ride...

A new variation on an old theme

I wouldn't rank Burning Paradise among Robert Charles Wilson's best efforts but it's an interesting and original variation on the old "aliens who look like humans" theme that doubles as an alternate history novel. Conceptually, I liked it quite a bit but the story plays as out as a thriller that never quite becomes thrilling. Some of that may be due to the narration. Scott Brick usually does a solid job but he read this book in a somnambulant, melancholy tone that rendered both action and drama a little lifeless.

The novel ends on a strong note and it was an enjoyable diversion but I can't quite recommend it.

I enjoyed listening to this. The plot is interesting and the characters are believable. Fairly short, it makes for a great light sci-fi read.