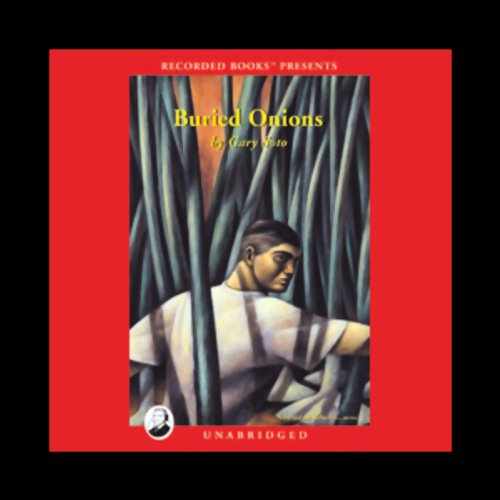 "You can pray and sometimes God listens," says 19-year-old Eddie. "Other times he's far away in India or Africa or maybe close to home in Fresno, his body sprawled on the floor, glass all around because of a drive-by."

All Eddie wants is to find a way out of the dangerous life he's living, where his friends are lost in a world of drugs and violence. Even his aunt wants to give him a gun so he can avenge the death of her son. But no matter how hard he works, Eddie can't seem to pull himself away from the sweltering sadness of the city. It's as if giant onions had been buried beneath him, Eddie thinks, releasing shimmering vapors off the black asphalt all around.

Gary Soto, the award-winning author of Jesse, presents a tough, relentless look at a life spiraling out of control. Narrator Robert Ramirez voices all the grim failure of the American dream.

What listeners say about Buried Onions

Gary Soto tells a great story about poverty, violence, and the struggles that one goes through in life. he does this in a very artistic way by including heaps of metaphoric language that presents the reader/listener with detailed imagery. This is definitely an influence of Soto's time writing poetry.

That said, he doesn't put his home town in any form of positive light. he makes the Central Valley of California seem like a place no one would want to live, and that is a bit of a shame.

Thee preformance by the narrator was quite good. He does a good job of going through a book that has Spanish words and phrases in it.

loved the book. needed it for English 51ALO1. easy to follow along with. Robert Ramirez did great with narration!!