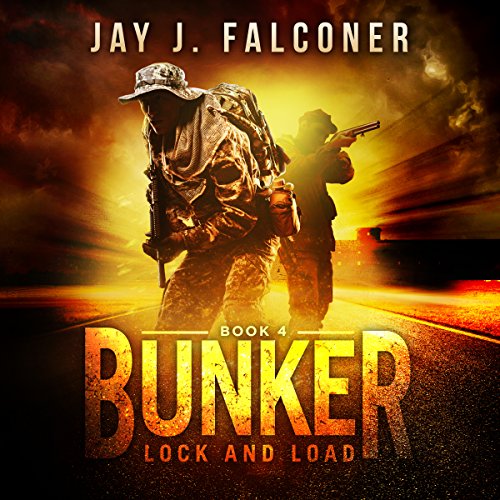 After the insurgents take control, Jack Bunker rallies all his skills and training in an explosive battle for survival. Despite being outnumbered and outgunned, he vows to never stop fighting to protect those he cares about.

At least he won't be facing death alone. Newfound friends join his quest, using their combined ingenuity to help repel the threat.

Victory will come at a steep price; however, when dark secrets are revealed, exposing some while protecting others. Treachery abounds as tempers boil, romance blossoms, and codes are deciphered, leading some to make deals with the enemy to settle old scores.

So does time, when the grand conspiracy finally reveals itself.

From award-winning, number one best-selling author, Jay J. Falconer, comes another heart-pounding, action thriller that you won't be able to put down. If you loved The Sum of All Fears and Red Dawn, don't miss this gripping tale of government-sponsored treason.

What listeners say about Bunker

Not a good value

The story line was awesome, but paying full price for a book that was only 6 hrs is not a good value. They should have merged books 4 and 5 into one book.

The idea of requiring us to spend $14.95 for each segment of a book that oftentimes is in five parts or more is a win - win for Audible and authors alike. However, I'm not happy with paying $75.00 for a book that would cost me less than $26.00 at Barnes & Noble.

the story is good the price is unfair

I really tried. I read the first three books and was willing to “overlook” the sexist innuendos and the lack of depth. I’m ok with just-for-fun books that help me pass the LA traffic time. However, this book hit the limit for me. Beyond the many inappropriate sexist descriptions, the conspiracy theory is too weak and easy to disprove by a single Google search.

If you’re looking for a macho book with little thinking - this is your book. If you want more, keep searching