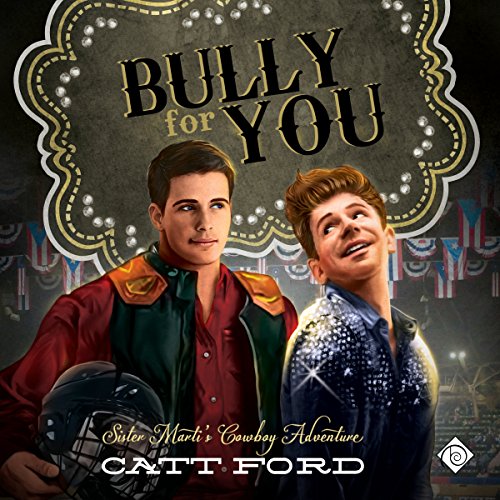 What could be hunkier than a cowboy? Not much, according to Martin Du Bois. He convinces two friends that a visit to the rodeo is every gay man's wet dream, and so the three of them gaily (and I do mean gaily) set off to watch cowboy asses in action.

A visit to a bar after the event gets Martin closer to the action than he ever thought possible, and he meets Jesse Cumberland, the man who caught his eye in the ring and made his rhinestones sparkle. Instant attraction leads to a one-night stand that gets under Martin's insouciant skin and causes him to rethink his determination not to get involved emotionally. When Jesse invites Martin to his ranch, the visit is almost derailed by Martin's realization that they lead very different lives. As a flaming city queer, he sees no way to fit with the solid, athletic Jesse. It's up to Jesse to see if he can change Martin's mind.

What listeners say about Bully for You

The story was okay - definitely not fully developed, very top-layer. The performance sounded like what a gay Sesame Street character would sound like in a Saturday Night Live script. Overall, not impressed.

Martin is a very flamboyant (to say the least) gay man. He gets a wild hair to go to the rodeo and there he finds himself his very own cowboy, Jesse.

Jesse and Martin start what is looking like a hot and heavy affair, but can it go anywhere? Martin is a city boy and Jesse a country boy and never the twain shall meet. Right?

Well, I guess you’d call this a story with a HFN, but… they don’t leave us with a lot of hope. By the end the boys are willing but able or ready? I’m not so sure.

If you’re in the mood for a light-hearted read – the dialog is really witty and the audiobook really shines in this department – but aren’t tied to a happily ever after – this is the book for you.

I enjoyed Cory Lord’s narration very much and I think had I read this rather than listened I’d have been disappointed. He does the “bitchy queen” perfectly and the juxtaposition of the cowboy and the “flamer” are wonderful.