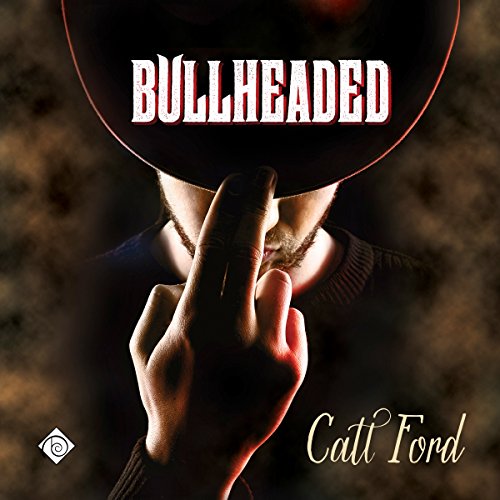 Aging bull rider Cody Grainger needs bullfighter Johnny Arrow for more than just protection in the ring. Their bond of trust goes beyond the professional and into love, but while their relationship holds up to the need for discretion imposed by their sport and repeatedly having to watch each other put themselves in the way of dangerous animals, other barriers still tear them apart.

For one thing, Cody is 10 years older than Johnny. But instead of contemplating retirement, he focuses on winning the championship, desperate to stay on top. Johnny is only beginning to find the professional recognition he craves. When frustration leads Johnny to walk away, Cody's season slumps. While they're apart, they both slowly realize they are meant to be together. But machismo abounds in the sport of bull riding, and their pride might be an obstacle too big for love to overcome.

What listeners say about Bullheaded

Johnny & Cody...a wonderful pair. Their journey to love and mutual respect was epic. On a side note, the bull riding part of the story was pretty hot! Narration was excellent and the story was entertaining and realistic. Thoroughly enjoyed this audio book and would definitely recommend!

Not great, but good.

Yes, give the reader a better connection with Cody.

Knocked Cody down a few pegs. I had trouble relating to him throughout. Words that come to mind are selfish, immature and conceited.

What does Derrick McClain bring to the story that you wouldn’t experience if you just read the book?

Having not read, only listened, I'd say maybe his voice and bringing the characters to life gave them more depth. I'm not sure I could have finished the book if I were reading Cody.

Do you think Bullheaded needs a follow-up book? Why or why not?

This was a hard one for me. I really enjoyed McClain's narration throughout for the most part, just a few unsteady voice changes here and there.... Cody kind of drove me nuts though. He was hard for me to relate to, especially when he saw himself as not being selfish all while thinking "as long as I get my way it's okay for me and Johnny" say what now?

I liked the story itself, the rodeo world and the way it was portrayed, described and brought to life with vivid details and descriptives. At times, it was overly descriptive though. I would have liked more attention to detail for the romance and interactions between Cody and Johnny and a little less in the arena.

I suspect that readers who love cowboys and rodeo settings will eat this one up, and the narration definitely gives it an edge.

First of all, I want to say that I think this is one of my favorite covers all year.

Cody Granger is a grand-prize winning bull rider but he is getting up there in age. He is involved in a relationship with Johhny Arrow one of his ranch Parents hands and an up and coming bull fighter.
They have been together over two years. Cody thinks things are perfect, Johnny is feeling controlled and needs some breathing room.
After a training session of four young cowboys, Johnny has had enough of Cody putting him down and making him feel kept so he leaves. both men have to find their way but will it lead them back to each other?

Bullheaded is a very well written story with lots of intriguing characters. There are several smaller plots that follow along with the major one of the two men's break up. The story is in both Johnny and Cody's view so you are getting like three stories in one.
The sex is hot as well. I want to warn you that this book is 340 pages if your reading and 12 hours and 7 minutes if you are listening. You will be hooked and want to keep going once you start.

This is my first book narrated by Derrick McClain. I will be searching for more of his for sure. He has a voice smooth and sweet as honey and yet he can nail several voices for different characters. I absolutely loved his announce voice.

If you like bull riders, bullfighters, rodeos, second chances, and some hot man-sex this is a must read. I highly recommend it.

*I received a copy for an honest opinion*

Fantastic narration - not sure about the story

This is a tough book for me to review. I’ll start with the narrator – because he was awesome.

He does an amazing job with all the MANY characters in this story and he gave Johnny in particular the perfect voice. I really loved his interpretation of the characters and thought this was absolutely the best way to enjoy this story.
(5 of 5 stars for the narration)

Now for the story. On the one hand it is well written, gives an AMAZING look at life as a bull rider/bull fighter and life on the rodeon circuit on the down low.

Catt Ford has given us many fully developed characters with real flaws and given us a set of MCs who are very REAL.

I was really loving the story up until the point where the MCs broke up. Then the story really disappointed me – and I know it’s just my own silly biases – but there you have it.

I didn’t like the “exploration” Johnny did while he and Cody were on a “break” – even though I totally see why the author did that. I also did not like how the story ended because it still felt so tenuous. I really wanted Cody and Johnny to realize that their lives were more than their careers and I didn’t get that from this. So – to me – I was disappointed. I’m sure it’s a realistic take on things – but that’s not why I read stories – so I was disappointed. (Others may not be at all.)

Coupled with the narration – 4.5 of 5 stars – because it really does have a lot going for it.

The vast and in-depth storytelling is excellent. The narrator does a fantastic job. The speed in which the story unfolds is smooth. The sexy scenes are many but not overly pornographic, descriptive but not smut. (Just the right amount not page fillers that some authors have to use.)
Its a long book but you don't even notice it runs that smoothly. Great feel good book, with struggles and hurdles and happy ending.

I am still pretty new to AudioBooks, and the different genres are defo what is giving me the most satisfaction in reviewing.

I was intrigued by the plot line to this book. Bull Fighting and a relationship breakup. 12 hours was a long time to be entertained for, so I had some trepidation on how the author would do just that.

I will admit, there was a little more sex than I've been used to, maybe it is because this is only the second M/M audiobook I've had the pleasure of listening to, and I've only ever read it before. The difference in the acting and hearing it is a lot. And yet, it's still really hot sex. haha.

There were so many good things about this book, that I'll struggle to list them, all but here are some of my favourite moments and not in any particular order.

- I've never been to a bull fight, nor seen a lot of it on TV, so the whole backstory around this sport, was very interesting and enlightening into something I think I might enjoy now, thanks to the great writing and narration.

- Speaking of the narration, Derrick gave both Jonny and Cody a distinctive and wonderful persona, and to be fair I even enjoyed Val, Davis, and everyone else. Great, soothing voice, and wonderful injection of passion and tension when needed.

- I have never been in a breakup, so, I don't really know what I would go out and do, and I can't really judge Cody and Jonny over their actions, I guess at least that Jonny kept himself from actually having physical sex with strangers, and that said a lot about him as a character as much as he still went out and enjoyed himself and met a fair wide variety of people in the summer, he still kept that for Cody.

I think the best part of his encounters has to be with March, because of the hotness and also because March is the one who talks Jonny into giving Cody a second chance and this talking really does make Jonny realise why he's miserable now and what Cody really meant to him.

Of course, the biggest Character Arc does come from Cody in the fact that he actually really comes to terms with everything that happened, that life is not all give to you on a plate and that things worth having are worth fighting for, and I'm not just on about his Bull riding.
Cody actually starts to listen to Jonny and see him as a person, not just his person. This was a very moving part to the story and I felt for every moment he was in pain over Jonny. Miserable but in a very relatable way, these two Mc's are so very real that you could never mistake them for fictional.

As I said, I did wonder how I was going to be entertained for the full length of this book, but the action never really let up either. There was constant, worry and strife for both these MC's and towards the ending, where two of the moments I enjoyed the most. Where Dub, talks Cody down in the locker room. And where Cody give Jonny the pendant :)

The bull riding never lets up and neither does Cody's buck off streak into the finals and off his first ride. The fact was with this story I just never knew if Cody was actually going to win the Championship, and of course I was glad he did. It was amazing to listen to and be there for the both of them. Worrying over his knee injury and how he would dismount. Fab job on both story and narration as the tension just never lets up.

Towards the end, I was a little concerned that the story didn't end with the bull ride. But pleasantly surprised that it continued into the bittersweet resignation of Cody and revelation of the pendant, and his sheer love for Jonny in the fact that they would get married (if it were legal) so heartbreaking. I really did want both these characters to realise that there would still be love for them after their careers are over, and they kinda said this, more so Jonny when he ays he'd love to still have a ranch together. I just think it was swept under the carpet a little too much at the end, and it should have been more realise.

But, overalI really enjoyed this, and I will be looking out for more novels by Catt Ford and narration by Derrick.

Thanks to both of you, for a wonderful glimpse into Bull Riding and Bull Fighting and for whisking me into the world of these fab characters this week.