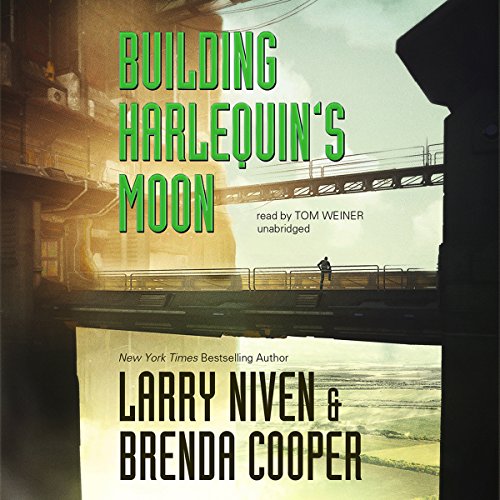 The first interstellar ship, John Glenn, fled a solar system populated by rogue AIs and machine/human hybrids, threatened by too much nanotechnology, and rife with political dangers. The John Glenn’s crew intended to terraform the nearly pristine planet Ymir in hopes of creating a utopian society that will limit intelligent technology, but by some miscalculation they have landed in the wrong system. Short on the antimatter needed to continue to Ymir, they must shape nearby planet Harlequin’s moon, Selene, into a new, temporary home and rebuild their store of antimatter through decades of terraforming.

Gabriel, the head terraformer, now leads this nearly impossible task; his primary tools the uneducated and nearly illiterate children of the original colonists, born and bred to build Harlequin’s moon into a virtual antimatter factory. With no concept of the future and with life defined as duty, one girl, Rachel Vanowen, begins to ask herself, what will become of the children of Selene once the terraforming is complete?

“Niven and Cooper have crafted a multigenerational, star-spanning epic with intriguing, fast-paced action. Against a backdrop of mind-boggling technology, the authors ask important questions about how far science should go and its impact on social structures and human rights. Niven and Cooper are playing God on a grand scale." (Brian Herbert,  New York Times best-selling author)
“Fans of both hard and softer, psychological SF will welcome veteran Niven and newcomer Cooper’s well-written tale…Niven and Cooper provide complicated characters, particularly the AI, which struggle with realistic moral dilemmas.” ( Publishers Weekly)
“Exploiting Niven’s classic flare for world building, he and Cooper craft an entertaining epic with subtexts concerning cultural obsessiveness and the fear and worship of science.” ( Booklist)

Crashing moons together to make a world.

It's cool to see someone taking the long veiw on terraforming. 60,000 years to just get it half way livable.

It was the right length for how strong the story was. Good character development and interesting in handling of oppressed vs oppressors in an isolated piece of humanity

, loved it, great story, great performance, awesome actor. you probably know the basics of working on mechanics before you start and be comfortable with the idea of imagining a jovian type system

Larry and Brenda are an excellent balance of science, story, and believable characters. I would highly recommend this book to any of their fans.

How did this performance average 4.4?

Where does Building Harlequin's Moon rank among all the audiobooks you’ve listened to so far?

What other book might you compare Building Harlequin's Moon to and why?

hard to tell because the reader is so bad.

He sounds like he is reading a documentary or technical user's manual. He has a deep, booming voice. Since most of the characters are female and/or children/teens, it just doesn't work. Even when he is reading "tender moments" it's like the Hulk hugging a child. You know what he's trying to do but you can do nothing but cringe. I'm sure that he would be great for some other books but not one such as this in which gentle nuances are needed. The characters are constantly torn because of decisions that they have to make or that others made. He just can't express that depth of felling.

Haven't finished it yet but it really is difficult to get into it and really care about the characters since they are read so woodenly.

Excellent - but needed to be twice as long

This book has world building scope (literally), but is too short to effectively flesh out all the possibilities. I loved the story, but really felt they skimped on developing the universe they created. What they did developed is extremely interesting and leads one to ponder the 'what if's'. And, as far I can determine, there is no sequel to expand on these great ideas.
Too bad.

Narrator was little too mechanical, the inflection was choppy. Also, I like the timbre of his voice, but the main character is a young female - not a good match.

After a brief but interesting section on the building of the moon (Pure Niven) the story goes flatline.

It takes a long time for anything to happen, but the sad truth is that nothing much does occur in the story. The last 30 minutes or so are rushed and cover approximately 200 years.

This desperately needs an abbreviated version, and even then I wouldn’t’ recommend it.