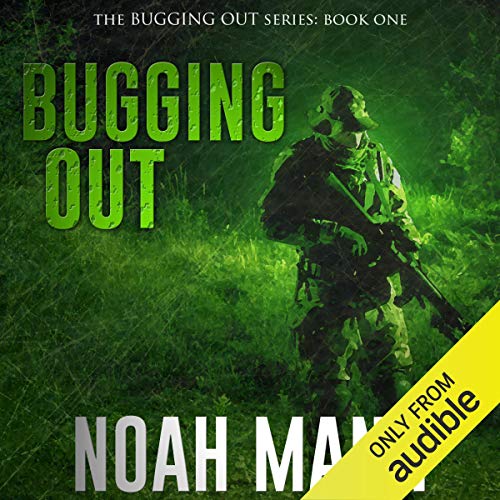 Book one in the Bugging Out Series

Get out. Hunker down. Stay alive.

It came without warning: a microscopic enemy that methodically turned the green Earth gray, decimating the food chain until only the prepared were left.

But preparation alone is not enough to shelter Eric Fletcher from the chaos to befall the world as governments fail their citizens. Seeking refuge at his remote property in the north of Montana while society devolves into starving anarchy, he finds himself facing not only the rigors of survival but also the appearance of a self-proclaimed ruler promising to set his piece of the withered world right for those who follow. Those who don't will suffer the consequences of his sadistic retribution.

Finding another survivor near his refuge, Eric attempts to steer clear of the conflict brewing in nearby towns. But soon he and his newfound partner in survival are targeted by the dictatorial leader, leaving them two options: run, or fight for what is right.

What listeners say about Bugging Out

The book was a joy to listen to!! I was sucked into the struggles of the characters hard road to survive. The book also dug into what are something's we miss they one might need in case of a catastrophe that I would have not thought of.
I very much recommend you read it!

From Jim just a regular guy living in the Midwest.

At first i was really excited about the book. He starts out strong, working his preps, then everything goes sideways. I will br getting the second book. I'm not fully clear why,

The reader makes it hard to listen

The reader has a constant soothing tone like he is trying not to wake a sleeping child in the next room. He is a good reader, but not at all a voice actor. Very little emotional change in his voice. And to top it off he has an unusual way of ending nearly every sentence with an odd down note.

This is a good book!

The author really does a good job with this in my view, the story is most interesting and certainly different from all the rest of this genre I enjoyed it. The characters are pretty good and you can start to really like some of them except the bad guys of course. Granted the main character is a bit naïve but nice guys do have that about them. I don’t see a second book [series] coming but would like it if there were.

If you could sum up Bugging Out in three words, what would they be?

Would you listen to another book narrated by Mark Westfield?

The premise was bit out there and there were solutions that were pretty easy to implement, but overall, the situations that the main character found himself in during a survival situation were believable.

Narrator was terrible, story was OK, not sure I'll be getting book two in the series

Great listen, good character development involving believable characters. I'm looking forward to more, but if the "blight" has wiped out both plants and animals good luck

A different twist but a real teaching book on what to expect from other humans in a melt down. Looking forward to the next book.

While most apocalyptic novels tend towards to macho flawless hero. This is a far more believable and enjoyable take on the genre.
The writer uses a great vocabulary to paint a picture of a world vastly changed without it sounding as though it were derived from the mind of a High Schooler.
I will be looking forward to the next installment.

Nope, not even close to being a good try

Predictable and teribly narrated.. The story has potential but the author and narrator could not pull it off.

Great read full of action and suspense with no bits to bore you which I liked. couldn't put it down.