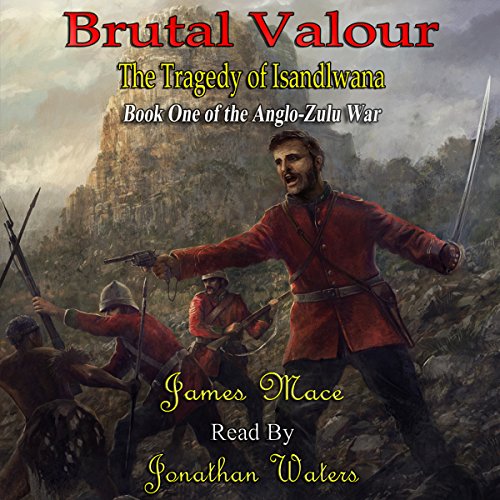 Brutal Valour: The Tragedy of Isandlwana

Brutal Valour: The Tragedy of Isandlwana

It is December 1878, and war looms on the horizon in South Africa. British high commissioner Sir Henry Bartle-Frere seeks to dismantle the powerful neighboring kingdom of the Zulus and uses an incursion along the disputed border as his justification for war. He issues an impossible ultimatum to the Zulu king, Cetshwayo, demanding he disband his armies and pay massive reparations. With a heavy heart, the king prepares his nation for war against their former allies.

Leading the invasion is Lieutenant General Sir Frederic Thesiger, Baron Chelmsford, a highly experienced officer fresh off a decisive triumph over the neighboring Xhosa tribes. He and Frere are convinced that a quick victory over the Zulus will negate any repercussions from the home government for launching what is, in essence, an illegal war.

Recently arrived to South Africa are newly recruited privates Arthur Wilkinson and Richard Lowe, members of C Company, 1/24th Regiment of Foot under the venerable Captain Reginald Younghusband. Eager for adventure, they are prepared to do their duty both for the empire and for their friends.

As Frere's ultimatum expires, the army of British redcoats and allied African auxiliaries crosses the uMzinyathi River at Rorke's Drift into Zululand. Ten days later the British and Zulus will meet their destiny at the base of a mountain called Isandlwana.

I love well researched and well written historical fiction and this book is exactly that. How much of the personality, behavior and opinions of the characters is true to history... I don't know. What I do know is, that each character was written in a truly believable manner that was engaging and kept me on the edge of my earbuds wanting to know how their role, in this part of history, would unfold. The story was written with glimpses into the actions and beliefs/ motivations of many characters.
The story was told through the people on both sides of the conflict. The details describing the harsh conditions and battles were enough for me to feel for those involved and get a sense of the tragic affair without being too overly gory.
I have never seen any of the movies or learned much about the Anglo-Zulu wars.

I want to listen to the next book! I would definitely read/ listen to another by this author.

The narrator did a wonderful job with the voices and bringing life to the story. I am not an expert on the Zulu language but I think he did a great job pronouncing the Zulu words and names and phrases. He spoke them without stumbling or hesitation which made them sound all the more correct.

I was given this free, review copy audiobook at my request and voluntarily left this unbiased review.

So believable that one might think the dialogue was from the mouths of those soldiers and officers of the Queens army. The vast research which must’ve taken course by Mace is overwhelming to consider. However, all accounts of this greatest defeat in the Victorian army, which I have studied prove up Mace’s outstanding representation.

great story about some truly heroic deeds an men. War is never a pretty thing,never like tv. But men can aspire to some awe inspiring moments at such times. This book ,I think captured it greatly

The Zulu war brought to life

I grew up a fan of history and of the wars that shaped our world. One of my favorite movies as a child and as an adult was Zulu, Michael Caine’s first movie (he played Bromhead). A tale of the battle for Rorke’s drift. This story is book 1 is the Zulu war a historical fiction that takes you and puts you right there into the hearts and minds of the British, the Zulu and the other native and settlers of the era and area. It covers the event leading up to and the subsequent disaster that was the battle of Islandawana, the precursor to the battle of Rorke’s drift. The story lends a gritty realism to the facts of the battle and truly connects you to the players that shaped the war into what it was. Highly recommend and can’t wait for the rest of the series. Many hours of great entertainment. I was voluntarily provided this free review copy audiobook by the author, narrator, or publisher.

I have never read about this period of history surrounding the British war in South Africa. Incredible story telling and suspense. Can't wait for the next one

This was a fascinating book. I knew nothing of this historically speaking so now I’ll have to learn more. Very interesting. Well written with characters that held my interest. I definitely enjoyed this one. The narration was well done. Great performance.

I am not a quitter when it comes to listening to books but after 11 hours I had to give up on this one. the begining had me interested but man, this author just could not get me to stay engaged.

Excellent rendition of a brutal event. The historical accuracy was spot on and Mace filled in the gaps wonderfully with his own narrative, bringing the characters on both sides of this conflict to life. Context was laid nicely and the battle itself was very well done. Waters' did a fine job narrating as well, deftly navigating the accents and names. Anxiously awaiting part two...

While it didn't detract from the story too much , I found the use of a non British reader and his inaccurate pronunciation of some of the army ranks and place names irritating. However, I'm sure that American readers would feel the same of a British reader reading an American book.

The story itself however, is well written and well researched, relating how the ineptitude of a few led to an inglorious defeat of the British army despite the gallantry and discipline of the many.

As others have indicated the story is excellent but afraid the narrator grates on the ear due to in ability to pronounce British towns and words.
Don’t get me wrong he is a good narrator and is able to do multiple voices well but unfortunately the issues with English pronunciation grates all the way through. When a character can’t pronounce their own home town it knocks you out of the story ...
Despite this I will however persevere to the other books

Narrator is obviously not English but is pretending to be. What gives him away is his inability to pronounce common english words and place names. Its painful. It would only have taken a bit of research to find the correct pronunciations. He obviously just couldn’t be bothered.

I have a passion for history and most notably military and the Zulu war in particular the book is excellent and the author has put faces to the story . not just the leaders on both sides but the man on the ground .very sad and moving at times that's the good bit .th e narration is poor the british leadership is gruff the youngsters hardly any distinction between them but saying that its not bad to listen too because the book is highly detailed

James Mace brings the story to life. A fascinating listen bit I did get confused by all the names and the flipping from one place and person to another. That said I did enjoy the listen.

this was my regimental history

been left feeling a little disappointed it's not as what we where told at R.R.W

This is a story I know well, but still manages to stir the emotions even after all these years.

So listening to a a semi dramatised version was an interesting experience. Quite hammy in parts and really hammering home the jeopardy of the situation.

Overall done really well, although my biggest issue was the narrators pronunciation of many place and character names. He quite literally butchered many names, I mean calling Lord Chelmsford, Lord Kelmsford, that’s such an awful error. But maybe that’s just me?
Of course I’ll have to listen to the Rorkes Drift story now!!!

Thoroughly engaging audio book, which compelled me to buy the follow on book 2. The battle at Isandlwana is well known and well documented; however, this book treats the subject with an air of personal empathy and deals with the two sides equally well both prior to, during and after the battle.

Overall the book is well presented and the story clearly compelling; its one shortfall may well be the performance, which I found a tiny bit overly theatrical at times (but I can only compliment Jonathan Waters on his reading).

The personal stories blended well with the objective of the book; and brought to light a couple of items that in the film "Zulu Dawn" that were not dealt with; and indeed highlighted some of the errors that are contained within that same film production. This book helps put the record straight from the point of view of the film production.

The language is crude but appropriate in places; and this is what gives the book that personal reflective tone rather than reading (or listening) to a non-fiction historical book.

Worth a listen; and not excessively long, so you will not get unduly tired of it.