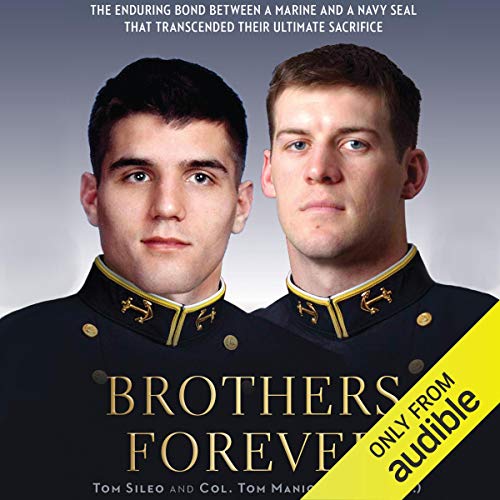 Four weeks after Navy SEALs had killed Osama bin Laden, the President of the United States stood in Arlington National Cemetery. In his Memorial Day address, he extolled the courage and sacrifice of the two young men buried side by side in the graves before him: Travis Manion, a fallen US Marine, and Brendan Looney, a fallen US Navy SEAL. Although they were killed three years apart, one in Iraq and one in Afghanistan, these two best friends and former roommates were now buried together - "brothers forever".

Award-winning journalist Tom Sileo and Travis’ father, former Marine colonel Tom Manion, tell the intimate and personal story of how these Naval Academy roommates defined a generation’s sacrifice after 9/11, and how Travis and Brendan’s loved ones overcame heartbreak to carry on in their memory. From Travis’ incredible heroism on the streets of Fallujah to Brendan’s anguished Navy SEAL training in the wake of his friend’s death and his own heroism in the mountains of Afghanistan, Brothers Forever is a remarkable story of friendship, family, and war.

"First Lieutenant Travis Manion and Lieutenant Brendan Looney are true American heroes. Both were killed in action while I was Secretary of Defense, and I attended Brendan's funeral at Arlington National Cemetery. I was told there of Travis being re-interred next to him so that these best friends and Naval Academy roommates might spend eternity together—a bond unbroken by death. Their story is one of extraordinary courage, sacrifice, and love. It is a story of the price of freedom. All Americans should read it and understand the unimaginable debt we owe to such men, the best America has to offer." (Robert M. Gates, Secretary of Defense under Presidents Barack Obama and George W. Bush)
" Brothers Forever is the story of two warrior brothers-in-arms who are bonded forever by their love of country, their shared need to serve, their selflessness, their courage, and war. This is the story of a deep and lasting friendship that lives on in the hearts of all who knew and loved them. A deeply moving, true-to-life tale of two men, two brothers, two American heroes, who now rest with the angels, side by side at Arlington cemetery. God bless them both." (Gary Sinise, award-winning actor and founder of the veterans-supporting Gary Sinise Foundation)
"If you want to understand the warrior spirit of an American generation, please read this powerful and unforgettable book... Brothers Forever is, at heart, a testament of what it means to live a good life." (Eric Greitens, Navy SEAL and New York Times best-selling author of The Heart and the Fist)

What listeners say about Brothers Forever

You'll understand the initials after hearing the story. So moving that I made time to stop at Arlington to pay my respects to them!

What did you love best about Brothers Forever?

Very inspiring story of two guys who changed the lives of those around them. Whether on the battlefield or in their home towns, these two officers demonstrate the true meaning of leading by example.

What about Kevin T. Collins’s performance did you like?

He is one of the best readers. I have listened to a few books that he has read and he really knows how to capture the story and keep a reader interested no matter the book.

Of course. I listen mostly in the car to and from work but would find myself driving a little slower and eating lunch in my car so I could continue listening.

This story is an amazing story of 2 warriors that were very human. It is a story that warms your heart with brotherly love, and breaks your heart with the tragedy of 2 lives given for freedom.

Every American patriot should read this book. Colonel Manion brings honor to two men of honor, his son and his son's best friend. We are protected by heroes willing to make the ultimate sacrifice. If you've served in the military, law enforcement, or the intelligence community, you will respect and love these two young men. If you love the U.S., you'll feel the same way. Highest recommendation.

A must read for every American citizen

Extraordinarily well written. Let us never take their sacrifice for granted and always honor their memory through our words and actions.

A must read for those who want to learn about the true sacrifices for the heroes and their loved ones.

IF Not me then who

This is an amazing book and is very well written. As an OIF/OEF Veteran this book had me emotional and crying at times. I loved this book and have now passed it on to my son who one day hopes to be a SEAL. Godspeed gentleman and god bless your families.

I am so proud to be a Veteran!

As a US Navy veteran, and the son of a Navy veteran, hearing stories like this make so proud to be among those with that title. This story was very moving and shows how deep the bond between soldiers and sailors truly goes!

Now, I’m a full grown country boy so obviously I never cry, but this book did have my eyeballs sweating pretty heavily at times. This was a great true story about courage and sacrifice and I think both Manion and Looney are the kind of role models anyone could learn something from. Much respect to all the military families out there as well.

Amazing story of service, sacrifice and above all Love. This story makes me want to be better, thank you for sharing it with all of us. And God Bless those men and their families.