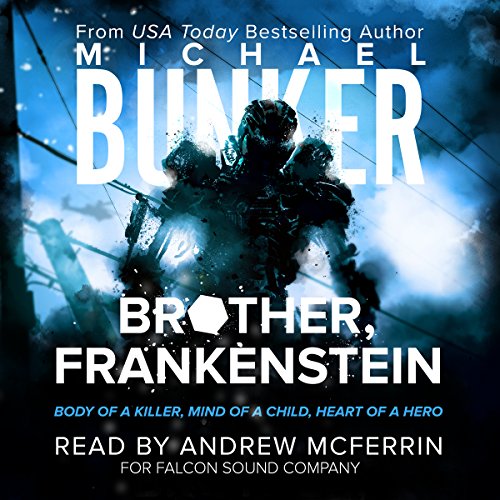 Dr. Chris Alexander, a borderline sociopath and technological genius, has designed an advanced cybernetic life form from prototype decommissioned military drones and top-secret experimental DARPA technology. The HADroid was supposed to be a military grade robot with the transplanted heart and brain of a human donor that would transform it into a devastating state-of-the-art war machine when activated by its onboard human operator.

When the mad doctor steals the dying child of a simple Amish couple and transplants the brain and cardiovascular system of their dying 11-year-old autistic son into the incredibly lethal robot, the dark forces of government come looking for their investment.

Dr. Alexander and the monster escape into another Amish community to hide among the plain folk. Frank, the autistic 11-year-old boy trapped inside the body of the world's most deadly robot, befriends another child who will help the prisoner inside the machine. Tensions arise among the plain and pacifistic yet closed minded Amish as they begin to suspect just what kind of technological monstrosity is hiding among them. Before long, hard men who do the government's most dirty deeds will come looking for a killing machine only to find a boy named Frank who has the power to defend a closed society from the worst of the world.

What listeners say about Brother, Frankenstein

Granted it's fiction but I found the story too implausible and the ending ungratifying. Perhaps the best fiction narration of any I've heard on Audible!

The story is both touching and thrilling, the narrator's performance is pretty good and in my opinion matches the spirit of the book.

Not Your Everyday SciFi Thriller

What a fantastic story, and so much more than your typical sf thriller... The insights into autism were fascinating and honestly realized... The snapshots into the mind of Frank were beautifully imagined and informative... The blurring of science and humanity were touching, yet disturbing... The realistically described Amish lifestyle and philosophy worked w/ the story well and were richly painted... The Frankenstein comparison is easy due to story and title, deservedly so, but reminded me quite a bit of the movie D.A.R.Y.L.
You might think you know who the monsters and sociopaths are when you start, and you'll be entirely wrong... Eye of the beholder and all that;)
An underated portion of this book will be the deft humor in its pages... Sometimes sarcastic, sometimes flippant and dark, sometimes honest and innocent, but always timely and apt... Some very fantastic action sandwiched between some exceptionally wrought inner musings and dialogue...
The #Anonymous analogous group helping behind the curtain, and in front of it towards the end lent flair to the overall story. Not to mention deep consideration to the manifesto and actions of such all too real groups... Read it one sitting which resulted in a sleepless night as I could not countenance stopping... The narrator was ideally suited for the reading and characters... Enough gushing, just read it already... (Might we be seeing Frank and Doc again??? Hmmmmmm)

There is plenty of hard science to entertain

Frank is an 11 year old Amish boy afflicted with dwarfism and autism. His brief life would have ended naturally if not for the efforts of a mad-scientist doctor. Chris Alexander has developed a HADroid device, a robot operated by the brain and circulatory system of a human. Breaking the rules of his military sponsors, he transplants Frank’s heart and autistic brain into the most powerful weapon ever devised; he now has only 60 days to either help Frank control his emotions and his powerful new body or be forced to terminate him – all while being ruthlessly hunted by the most vicious agent the military has.

Though it is a thoroughly modern novel, Bunker has managed to capture some of the mood of the original Frankenstein novel. And like its 19th Century counterpart, the story is much more about the social implications of fitting into society and the monster-as-metaphor for mankind’s gross misunderstandings and fear of the unknown. On the outside, Frank is an indestructible killing machine, but on the inside, he is still an 11 year old autistic Amish boy.

Bunker goes to great effort to reveal the many misconceptions about autism, and eventually how the boy overcomes many of his challenges. The Amish culture is also described in rich detail and with respect. He gives a nod to the movie, “Witness,” which parallels the story for part of the book.

Andrew McFerrin reads the novel in a way that makes it seem as if it were written for him. Dr. Alexander is constantly doubting his own decisions and actions, and Mr. McFerrin, through his excellent performance, gives us a front row seat inside the doctor’s brain.

There is plenty of hard science to entertain the most rabid science fiction fans. But ultimately the book is about the deep sociological and philosophical questions that society will eventually have to answer as the lines between man and machine blur.

Audiobook provided for review by the production company.

I could not stop liatening

I loved it! I listened to this on a car trip and found myself awake at 2 AM after I got home listening.

Not your typical Amish Frankenstein story

This was a really interesting and unique story. I fell in love with Frank almost instantly, and slowly came to care for the Dr too. The narrator did a good job as well.

solid story for the audiophiles and readers alike

First about the audio book itself... The narration was good and the sound quality was sharp. Nothing bad to say at all.

The story itself was enjoyable and unpredictable. There were only two aspects that I felt detracted from the story. The first was the initial mentions of the main character's drinking problem. He tells you.. a lot. Thankfully the story takes off and so that gets lost along the way. The second and probably largest problem with the story was the over the top aspect of the villain. I suppose there could be people like that out there, but I would have enjoyed it more if he were justified more in his thoughts as opposed to simply enjoying being a badass. Beyond that, I liked it. I never felt the desire to put the book away and the ending surprised me.

What is a man?

The idea is a simple one - what is it to be human? Can a child who has lost his body of flesh and blood, had it replaced with something synthetic, still be a child? And what, too, is a monster, a metal killing machine or the organic beings without thought or kindness to others? It is certainly thought provoking but never heavy. The story is well written, well paced, often moving but never sentimental. it is also fascinating for the glimpses were are given into the everyday life a an Amish community.

I would most sincerely recommend this book.