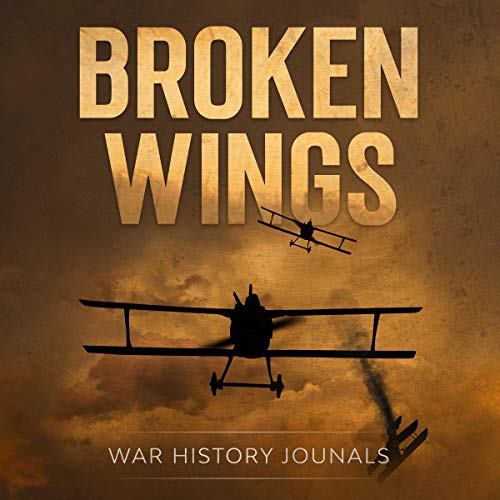 With an engaging and authentic retelling of his experiences as an escaped prisoner of war, this gripping account details the life and struggles of a captured pilot in 1917 Europe.

Lieutenant John Ryan couldn’t wait to see action in WWI. He joined up with the British colors out of Canada. As one of several American pilots in the Royal Flying Corps before the US joined the war, he earned his wings and became an ace through fierce air battles over the skies of Germany.

After getting shot down twice behind enemy lines, Lieutenant Ryan recounts the trials, tragedies, and tribulations of 72 days on the run behind enemy lines. These events are so incredible, you don’t dare stop listening.

If you like authentic accounts of astonishing stories set in World War One, then you won’t want to miss Broken Wings: WWI Fighter Ace’s Story of Escape and Survival from a German POW Camp. Click on the "buy now" button to get the audiobook today.

What listeners say about Broken Wings

Another great WW1 story. Well performed. The new galant airman on an adventure realises the difficulty of escape & effort to get back to his lines.

The cadence of the narration and the narrator's voice provided a pleasant and enjoyable listening experience. The story about this airman is intriguing and very interesting. Thank you to Story Origin and the author for providing a copy of this audio book for my listening pleasure. The opinions expressed here are my own honest opinions expressed voluntarily.

This is my favorite prisoner story I’ve ever listened too.

POW stories aren’t generally my cup of tea but I’ve read and listened to some. Being that I love military history, it comes with the territory. Be that as it may, I really liked this one. The story has this nonchalant carefreeness that I’ve never heard before. Most aviators later in history were professionals. The fliers in WW1 were kids seeking adventure and it shows. The character in this story just seems to lack any of the heavy emotions you seen in POW stories. He’s daring, brave enough to try it and just dumb luck happens to see him through a couple dangerous situations for sure. I really admired this kids story. He was very brave. This review might seem rambling, but I’m trying to capture what I felt listening to this one. It’s different. It really is. Give it a listen.

I requested a copy of this book for free in exchange for a review.

I really enjoyed this story about an American pilot who was shot down over Germany, sent to a POW camp. Told from the pilot's point of view, it reads like a time capsule of Europe during the First World War with all of it's heart-stopping danger and privation, the fierce courage of an American hero and the generosity of the European farmers.
This is an excellent story for anyone looking for a real life adventure and for those who just want to know a little more about life during the war.

This is a book that is presented as history but written as historical fiction. It doesn’t appear to be an autobiography, but is written as if it were. The purpose appears to be to convey the “history” as entertainingly as possible, and in that regard it was certainly effective.

Lieutenant Ryan was an American who was obsessed with flying—so much so that when World War I broke out he traveled to Canada to enlist in their air force so he could test his skills against the Germans in aerial combat. He was a skilled and successful fighter pilot who gives an interesting account of his training and the basic problems fighter pilots encounter—problems which eventually led to his being shot down in enemy territory.

Ryan was captured and made a prisoner of war, yet his idealism won’t permit him to sit out the rest of the war. While being moved to a new prison further from the lines, he makes a daring escape and then spends 72 grueling days trying to get back across the lines rejoin his own side. His efforts would make quite an exciting movie and the authors do a good job conveying the intense peril and morale-breaking frustrations he had to contend with. While the “novel” like structure makes it difficult for me to judge whether or not it is good history or not, it is certainly an entertaining tale.

I am an history buff, especially of the 20th century wars. Once again, the Greatest Generation shines through this fine book. I highly recommend this story to fellow history buffs.

This book is in the style I would describe as boys own adventure. Nothing wrong with that. As a Brit I grew up with Biggles.
This is a really enjoyable tale of daring do.
Full of confidence of young men.
Thoroughly enjoyed the experience. and recommend it to anyone who likes tales of the past.
I received a free copy of this audio book at my own request and voluntarily leave this honest review.

A fascinating incredible account of this pilots escape and journey back to freedom, Some of it is really incredible. The story has a fair few details missing that I would have liked to know, who was the famous German pilot he shared a vehicle with, what type of fighter did he fly in combat but the account itself has many other little know facts and tactics, how to attack German balloons and the type of anti-aircraft weapons used against him, it gives an excellent account of life on the run as an escaped prisoner what his diet was like who helped him who tried to take advantage of him. The narrator is could have done a better job of bring the story to life but is OK.
I received a complimentary copy from Storyorigin and have given a voluntary honest review