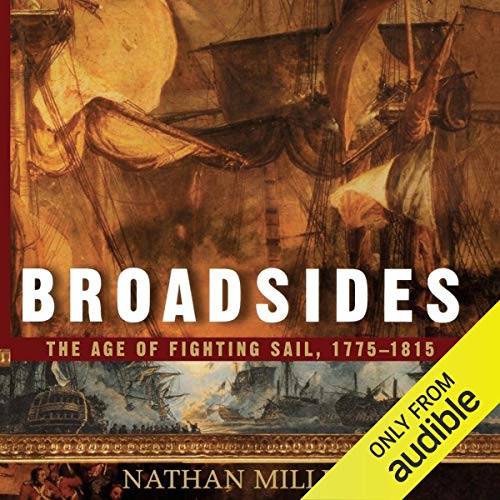 In the late 18th century, it was widely thought that to be a sailor was little better than to be a slave. "No man will be a sailor," wrote Samuel Johnson, "who has contrivance enough to get himself into jail. A man in jail has more room, better food, and commonly better company."

If that were true, historian Nathan Miller suggests, then the record of sailing in the age of tall ships would likely be distinguished by few heroes and fewer grand narratives. He counters that in the regular navies of England, the fledgling United States, and most other nations, brutal captains and thuggish crewmen were rare, and professionalism was the order of the day. It was their high standard of service that made those naval forces such powerful, even indispensable arms of the land-based military. Miller's great hero throughout this fine history is Horatio Nelson, whose valor was exemplary throughout countless battles around the world. But he writes with equal admiration of lesser-known figures, such as Lambert Wickes, Pierre de Villeneuve, Juan de Cordova, and "Foul Weather Jack" Byron, who served their nations and fellow sailors well, and often heroically.

"Pace the pitching black deck with a sleepless Admiral Nelson the night before battle bestows eternal rest and peerless immortality upon him; envision with Mahan the storm-tossed and ever-watchful ships-of-the-line that kept England secure from invasion; wonder in awe at Collingwood's dedication in working himself to death after Trafalgar elevated him to primary responsibility for England's imperial safety in the Mediterranean. All of this and more awaits the reader who will sail through these pages, every one of which is etched with the indelible expertise and boundless enthusiasm of Nathan Miller, master of naval history." (Kenneth J. Hagan, Professor of History and Museum Director Emeritus, U.S. Naval Academy, Professor of Strategy, U.S. Naval War College)
"This is not just inspired naval history--the personal lives of the seafarers themselves, from cabin boy to admiral, are given generous treatment." (The Times (London)
"A wealth of detail...Descriptions of dreadful living conditions aboard cramped wooden vessels give way to bloody decks after close combat....A solid introduction to a turbulent era at sea." (Publishers Weekly)
"[As] a companion to the popular nautical novels of C. S. Forester and Patrick O'Brian--it succeeds brilliantly." (Daily Telegraph [London])
"The descriptions of the great sea commanders and their battles display all the craft of the gifted writer....Read Broadsides for enjoyment as a well-informed, action-packed naval narrative." (The Christ Church Press

What listeners say about Broadsides: The Age of Fighting Sail, 1775-1815

This book should be a primer for anyone interested in the age of fighting sail. Well written and well performed.
1. This book explains how ships of the line, in that period functioned.
2. It explained the politics of those men who sailed the ships, in the time that they lived - which is just not done.
3. It is a new approach to world history, seeing things through the naval force rather than land force.

The author gives his interpretation of Napoleon Bonapart's relation with his navy, as opposed to his army, as well as a fledging country - America - trying to defend itself against a naval superpower. The autor is right on on the mark and so wonderfully understandable.

Full details lacking in other stories

Would you consider the audio edition of Broadsides: The Age of Fighting Sail, 1775-1815 to be better than the print version?

This book puts all the other stories into order and it helps you realize the other naval books of the time have a degree of truth.

What was one of the most memorable moments of Broadsides: The Age of Fighting Sail, 1775-1815?

I enjoyed many, I have read so many books that it all feel into place.

Not just one, I have alot of scenes that happened in different parts of history

Both, I could cry when the foolish govenments would treat the poor sailors very poorly, and be happier when they rewarded those who deserved it.

In history this wasnl't really that long, but the changes made to the world are still felt today. Steam ended these mens skilled talents and the world got alittle smaller.

Some Big Battles were too short

It is a great book and it does tell the battles from 1775 until 1815, but I felt he could have talked about Trafalgar and The Battle of the Nile in more details. Those were very bill battles and they impacted the Napoleonic Wars Considerably. The lesser known battles in the America's could have been less because in my view they were.
All in all there are very few books like this that you can read that address the peak of the age of the sail. All in all I liked it and would recommend it.

The Audible description focuses on the supposed overturning of the stereotype of brutal treatment of sailors, and I bought it on that basis expecting to get a different perspective. But that is a miniscule part of the book, covered almost just in passing, as the author concentrates on delivering a summary of the history of war at sea in the period encompassing the War of Independence and the Napoleonic wars. Since much of this is ground I'm already familiar with in greater detail than provided here, I was disappointed.

I'll also note I'm constantly surprised at the lack of quality control on these works; this one at least has none of the frequent changes in mixing levels that appear in many others, but the narrator introduces many inappropriately long pauses in the middle of sentences.

That said the book is a solid history, and worth getting on those grounds as long as one isn't expecting something different.

Well read, but some mistakes

It is a pleasure to listen to this audible version. Very good voice, nice to hear... But I happened to notice that the Narrator's reading was sometimes different from the text I had. Most of the discrepancies seem minor, but when the number of the ships are read different from the text... I felt very uncomfortable.

There are some slight differences with Britain's version of how accounts transpired so if your after how a specific event really happened further research may be required, but its still a great book and well worth the purchase.

Sail through the high seas of history

I didn't know what to expect getting into this book, which is probably why I enjoyed it as a quick trip through the period specified in the title. If you get this book, don't get your expectations up and you'll probably learn a thing or two.

a definitive history of sail and combat

this book appears to be extremely well researched and the story writing is first rate. there is a lot of detail in the many descriptions outlined in this very compelling piece of literature. the narration which can ruin a great book or make a bad book come alive is first rate. I put this narrator on the level of Grover Gardner. if 18th & 19thb century sail and sea combat is your jam, you will love this book

Some of the other reviews have mentioned that there are some editing hiccups here and there: places where recording segments were not perfectly stitched together and left awkward pauses. I only remember a handful of such moments and, while they are distracting when you encounter them, they don't ruin what is, I think, an otherwise commendable performance by the narrator and author.

The author does a pretty quick survey of the time period but balances this more general survey with interjections of greater detail about some of the captains and ships and events when they are particularly interesting or noteworthy.

All in all, it scatches the itch to hear about fighting tall ships of the Napoleonic era, which its less-than-perfect audio editing doesn't detract from.

Makes me want to go back and reread Cochrane by David Codringly or Six Frigates by Ian W. Toll.

Explained the story well. Excellent review of the Age of sail with focus on the American Revolution, War of 1812 and the Napoleonic wars. Well done, well done.

Really good yarn but with an American slant

I think it is fair to say that this is not the most scholarly historical work but none the worse for that. It is a really good account of a swashbuckling era of naval history covering the key campaigns and battles of the period well. The focus on Nelson is not very original but it does anchor the story well and the build up to Trafalgar is particularly well related.

My only quibbles would be a minor irritation with some of David Rapkin's pronunciations of British place and ship names (eg. Blenheim) and with a the American slant of the narrative. The book was presumably written primarily for an American audience so one can forgive the slightly excessive focus on American events but they felt to have been given too much prominence by this European listener.

The book and it’s content is fantastic; while not exactly for the beginner in the realm of the Age of Sail, it does a great job of outlining the period. Unfortunately, while the narrator is engaging, and reads wonderfully, there are points where it feels no one has actually edited the performance, leading to strange pauses, giving some sections a disjointed feel. Overall, though, we’ll worth a listen.

I learned a lot it gave me a feel for war in the age f sail and canons.

Works through the period systematically, taking a good amount of time to describe the context and strategy.